One of Edward II's chaplains was Richard de Potesgrave, who was parson of Byfleet, Surrey when the king was there in November 1308, and whom Edward shortly afterwards made parson of Heckington, Lincolnshire as well. Richard was close enough to Edward for the rest of his reign to be able to present petitions to him on behalf of other people on occasion. Richard founded the church of Saint Andrew in Heckington sometime after March 1309, when Edward made him parson of the village, and his tomb can be seen there to this day (pic below). Edward II himself never visited Heckington, to my knowledge, but his son Edward III was here in August 1330, just a few weeks before he overthrew his mother Isabella and Roger Mortimer. The church of St Andrew, Heckington, still stands there magnificently, and is most unusual in that almost all of it dates to Richard de Potesgrave's time; as many of you will know, this is not often the case with medieval English churches, when you tend to move six feet to your left and thereby move out of a bit built in, for example, 1120 to a bit built in 1240 with fourteenth-century additions, then you move over there and stand in a fifteenth-century bit with a Victorian reconstruction.

On Friday 8 July 2016, I was kindly invited to give a talk about Edward II by the vicar, Chris Harrington, and some of his lovely parishioners, who all made me and my family feel incredibly welcome. Thank you especially to Mary, Lesley and Pete! We had the opportunity to look around the gorgeous fourteenth-century church, then I talked for an hour about Edward and his reign and the controversy surrounding his death and/or survival, in front of around a hundred people, some of whom had come from Leicester and Doncaster. (And sold quite a lot of books as well. :)


St Andrew's is well known for its many fourteenth-century gargoyles and grotesques. Here are a few. 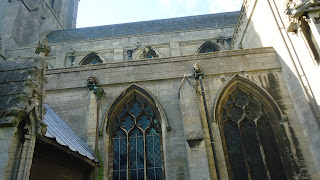 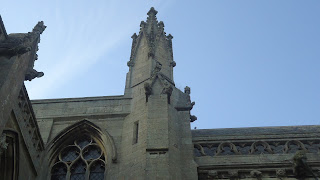 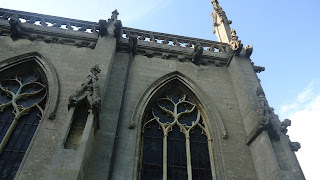 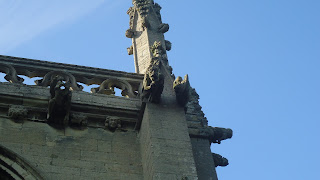 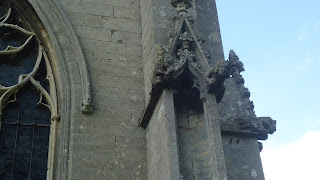 If you're ever in the vicinity of Heckington (near Sleaford in the North Kesteven district of Lincolnshire, just off the A17, about twenty-five miles south-east of Lincoln), I definitely recommend visiting St Andrew's church. I hope to go back myself sometime soon!

Thank you for posting ... please start recording your talks so that we in the US can hear them!

What a lovely place to give a talk. I love the atmosphere in some of the old English churches. There are a couple in my hometown although they have been restored very many times. Glad you managed to shift some books.

It's wonderful to see you acknowledged as THE expert on Edward II. You should frame that poster!

Hello! My parents live in Leasingham, 2.5 miles down the road, and I grew up in this area never knowing the significance of this Church. I read on your blog you were talking here and would love to have attended however now reside in Wales and could not arrange the trip in time. I am a massive enthusiast on Kind Edwards I-III inclusive, and have rather a significant interest in Roger Mortimer as well. I am currently reading and thoroughly enjoying your book on Edward II and will keep my eye out for any further talks you are doing. Thanks so much for posting this. I will be sure to visit the church when I am home next.

Hi, Dancin Fool! What a pity you couldn't make it! I hope I'll be there another time :-) Thanks for reading the book, and so glad to hear you're enjoying it!

Wodenful occation indeed. So the word of your expertise on the subject is spearding around the lands and I would assume that more and more of these talks will be heard across the UK. I really hope you would do a series on Edward. Perhaps a podcast?? Anyways, wonderful.