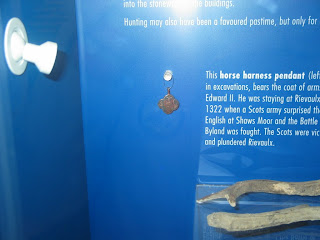 Edward II was staying at Rievaulx on 14 October 1322 when a Scottish force, led by Edward's old nemesis James Douglas - who had nearly captured him after Bannockburn eight years before - defeated Edward's small and hastily cobbled-together force at the Battle of Byland, about 6 or 7 miles away, and swept towards Rievaulx to capture the king. Edward's cousin John of Brittany, earl of Richmond - like Edward, a grandson of Henry III - was captured after the battle, and imprisoned for the next two years.

Edward, meanwhile, was forced to flee from Rievaulx to escape from the Scots, and rode to Bridlington on the coast, where he took a ship to Burstwick and then to York. (Why he fled to Bridlington of all places, I don't know.) The Bridlington chronicler, who might have seen Edward there that night or at least talked to members of his retinue, asks rhetorically "What worse fate could befall the English than to behold their king fleeing from place to place in his own realm in the face of the Scots?" Edward was forced to leave all his treasure behind, which was trimphantly seized by the invading Scots.

Edward had also come close to being captured after Bannockburn, and lost all his baggage to the Scots, but at least that time he'd acquitted himself bravely in battle. In 1322, however, he was over 100 miles inside the borders of his own kingdom. The author of the Westminster chronicle Flores Historiarum, always Edward's harshest critic, puts the boot in, as usual: Edward "fled, spurring on his horse, trembling and defenceless." The Lanercost chronicler, also no fan of Edward, wrote "the king of England...ever chicken-hearted and luckless in war and having already fled in fear from them in Scotland, now took to flight in England, leaving behind him in the monastery in his haste his silver plate and much treasure." (The chronicler is not entirely fair to Edward here, or to him and his knights in the aftermath of Bannockburn; he says "to their perpetual shame they fled like miserable wretches," but what were they supposed to do once the battle was lost - hang around and allow the king of England himself to be captured?) The Anonimalle, which claims, apparently incorrectly, that Edward was at Byland Abbey a few miles away, not Rievaulx, says that his horses and even their harnesses were taken by the Scots, evidently because Edward left in such a hurry.

The picture at the top is a horse harness pendant, bearing Edward's arms, found during excavations at Rievaulx. (About the only thing of his the Scots missed!)

And finally, a few more pics of the abbey. Check out the fantastically blue sky in some of them - sunshine! In Yorkshire! In October! 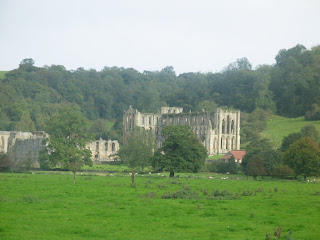 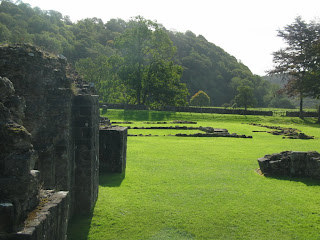 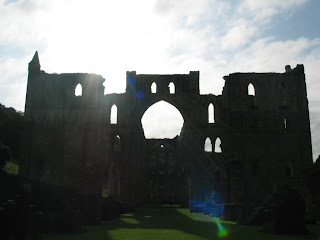 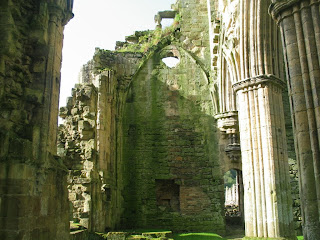 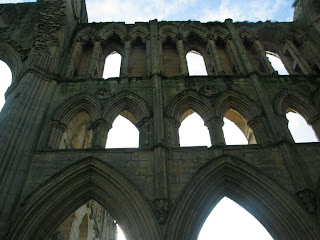 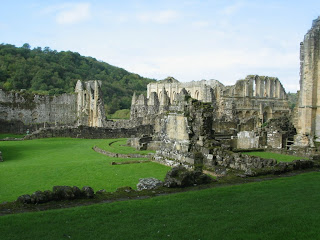 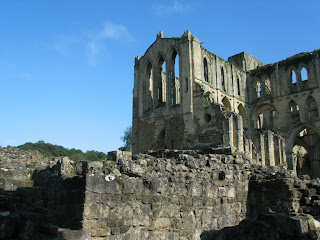 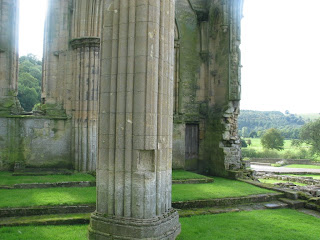 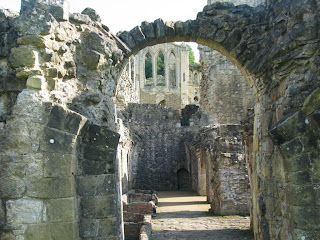 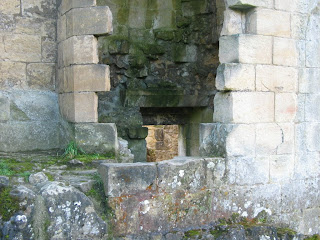 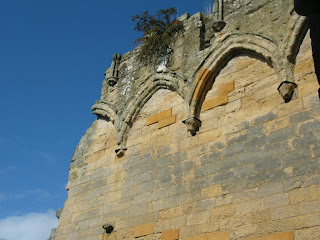 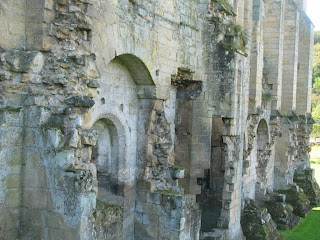 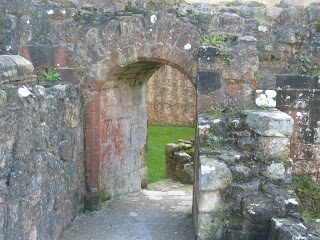 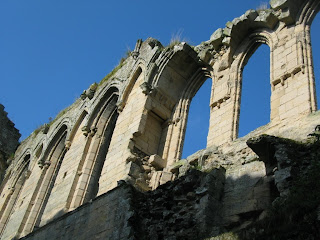 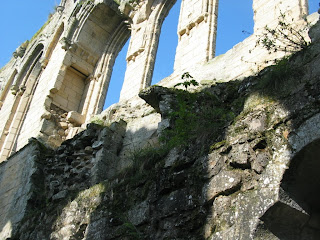 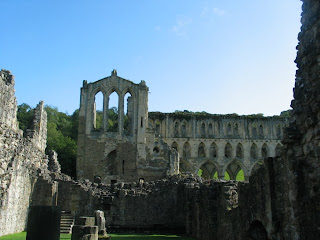 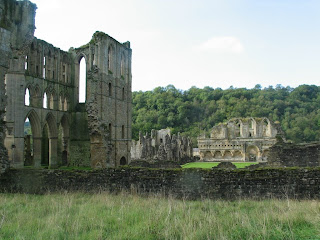 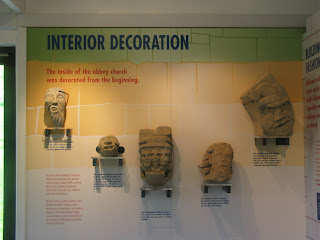 Interior decoration from the abbey church, found during excavations. 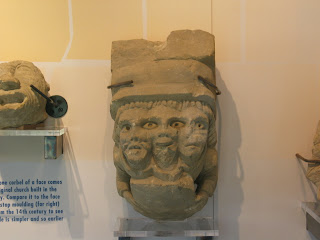 Posted by Kathryn Warner at 6:12 pm

The sun must have come out especially for you! Fantastic pix!

Enjoyed all of the pictures!

Lol, Ed had a talent to flee in odd directions instead of those making sense, strategically. :)

I think the mistake Ed made at this point was in actually attempting to take on the Scots anyway (or at least tempting them by being so near to their border) just after Boroughbridge. He just didn't have the troop numbers or the experienced leaders to mount anything like an effective campaign.

Running away was probably the most sensible thing he did at that time - even though it must have crushed English morale. I think if he'd been captured it would have been far, far worse.

Of course - Isabella would probably have disagreed with me on this!

Beautiful pictures! Thanks for sharing.

Anerje: it was drizzling that morning, and I swear the sun came out at the exact moment I arrived at the abbey. ;)

LOL, Gabriele! Maybe Bridlington was fortified - I'm not sure. Or maybe Ed just got lost. ;)

Lady D: yeah, Ed's capture would have been utterly catastrophic. Fleeing must have been mortifying, but was the sensible thing to do, given that his retinue was small with little if any chance of fighting off a large Scottish force.

Hehe, had Ed been captured, it would have looked very bad if Isa slept around with Mortimer. :)

Makes for a nice What If, though: how would history have changed had the Scots captured Ed?