The Murder of Walter Stapledon, Bishop of Exeter, 15 October 1326

Walter Stapledon or Stapeldon was, according to his entry in the Oxford Dictionary of National Biography, born in Devon on 1 February in an uncertain year in or before 1265 and perhaps as early as 1261, and studied at Oxford, where he was a magister by July 1286. He was elected bishop of Exeter on 13 November 1307, very early in Edward II's reign, and served as Edward's treasurer of England in 1320/21 and 1323/25. He founded Stapledon Hall, later called Exeter College, at the University of Oxford in 1314.

Bishop Walter was sometimes seen in the 1320s merely as a creature of the two Hugh Despensers, which is unfair and inaccurate; in early 1322, he sent Edward II what the king deemed to be the 'wrong' answer regarding the revocation of the Despensers' exile, at which Edward angrily summoned the bishop to him to explain himself. Walter was too intelligent and able to be merely a yes-man of the king and his over-mighty chamberlain Hugh the Younger. He did, however, make the fatal error of offending Queen Isabella, and this was to have tragic consequences. Walter was sent to the French court in the autumn of 1325 and was meant to give the queen money to pay her household, but in the belief that some at the French court meant him harm, he fled back to England disguised as a pilgrim, without giving Isabella her money. On 8 December 1325, she sent him a sternly-worded letter accusing him of being more loyal to Hugh Despenser than to her, and stating that he had inflicted 'great dishonour' on Edward II and herself.

Isabella's invasion force arrived in Suffolk on 24 September 1326; Edward II, staying in the Tower of London, heard of the arrival late in the evening of the 27th or on the 28th; and a few days later, on 2 or 3 October, decided that it was best to leave London. They city exploded into chaos. A convocation of some of the bishops, originally intended to take place in St Paul's, was moved to the other side of the river as this was deemed safer, though even so, the archbishop of Canterbury and several others decided it was prudent to flee from the city altogether. The house of Sir Geoffrey Scrope, chief justice of the King's Bench and an ally of the king, was sacked, though Scrope himself managed to escape unharmed. The London Dominicans (Blackfriars), loyal supporters of Edward II, also fled, and a man named John Marshal or Mareschal, believed to be an ally of Hugh Despenser the Younger, was dragged out of his house and beheaded in the middle of Cheapside. In short, London in mid-October 1326 was a dangerous place in which to be, or at least to be believed to be, an ally of the king or Hugh Despenser and an enemy of the queen.

On 15 October, Walter Stapledon rode into London through Newgate with his squires John of Paddington ('Johan de Padyngtoun') and William atte Walle, intending, according to the French Chronicle of London, to dine at his home on Eldedeneslane (Old Dean's Lane, later called Warwick Lane) not far from St Paul's. He was spotted by a mob, who yelled 'Traitor!' at him and pursued him and his two attendants. The three men rode hard towards St Paul's, hoping to seek sanctuary, and almost made it, but were cornered outside the north door and pulled from their horses, and the two squires were killed. The St Paul's annalist and the Anonimalle chronicle both say only that William atte Walle and John of Paddington were beheaded on the same day as Walter Stapledon, though the French Chronicle gives a more detailed story. It says that William, a 'vigorous man', managed to flee, but was caught at London Bridge, brought back to Cheapside, and beheaded. John of Paddington, who, the chronicler says, was warden of one of the bishop's manors at Holborn outside Temple Bar and was 'held in bad repute', was also beheaded in Cheapside. The Anonimalle states that Stapledon's manor outside Temple Bar was invaded and sacked by a mob on the same day, and the later Leicester chronicler Henry Knighton states that three, not two, of Bishop Walter's men were killed that day, but does not name them. The St Paul's annalist names the murdered squires as J. de Padingtone and W. Walle, and says that Bishop Walter intended to ride to the Tower of London that day, rather than to his own home in the city. I suppose it's impossible to know his intentions for sure, though he might have meant to go to the Tower, where Edward II and Isabella's ten-year-old younger son John of Eltham was. (Incidentally, some modern articles, books and websites give 14 October 1326 as the date of Walter's death, but chroniclers give the 15th, as does an entry on the Patent Roll.)

Bishop Walter Stapledon's death was an appalling one. He was clubbed or hammered over the head (percusserunt in capite) outside the north door of St Paul's and 'cruelly dragged' half-conscious through the churchyard into Cheapside, where a butcher whose name was apparently Robert of Hatfield* beheaded him with a bread-knife. Oy vey. John of Paddington was perhaps beheaded alongside him. The bishop's head was sent to Queen Isabella in Bristol, according to the St Paul's annalist and the Westminster chronicle Flores Historiarum, and his and the squires' bodies lay naked and unburied for several days. The French Chronicle of London states:

"Upon the same day [15 October], towards Vespers, came the choir of Saint Paul's and took the headless body of the said bishop, and carried it to Saint Paul's Church; where they were given to understand that he had died under sentence; upon which, the body was carried to the Church of Saint Clement without Temple Bar. But the people of that church put it out of the building; whereupon certain women and persons in the most abject poverty took the body, which would have been quite naked, had not one woman given a piece of old cloth to cover the middle, and buried it in a place apart without making a grave, and his esquire near him, all naked, and without any office of priest or clerk."
* This may mean William Robert of Hatfield, who qualified as a butcher in London in 1312; Calendar of Letter-Books of the City of London, Letter-Book D, p. 175.

The St Paul's annalist, whom you'd expect to be pretty well-informed on the matter, gives exactly the same explanation as to the fate of the bishop's body. Walter Stapledon was over sixty at the time of his murder, and a few months later was finally buried in Exeter Cathedral, where his gorgeous tomb and effigy still exist. His 1314 Oxford foundation, Exeter College, also still exists and is the fourth-oldest college of the University of Oxford. I don't know where the murdered John of Paddington and William atte Walle were buried, and, as is so often the case with the less politically important people, their existence is often forgotten. But they were human beings and they matter too, and their deaths should be remembered. 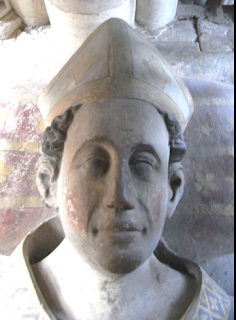 Mark Buck, Politics, Finance and the Church in the Reign of Edward II, pp. 220-22

But what made the mob act like this? Were they scared of Isabella and her troops, perhaps they had heard that many barons had joined in, or were Hugh Jr. and Edward II so hated in London that once the king took off, the hatred burst out in the open?

Or, which is also one possibility, was Isabella actually more popular among the Londoners at this time or even before? Where there spies and associates of the queen in London? Did these brutalities come out spontaneously or were they part of the Strategy of the invading force?

I guess we will never know but it is kind of intriguing that people associated with Hugh and the king were seen as "traitors" and targeted for murder. Plus that these things happened almost at once the king went away.

I wonder what really happened, who instigated these actions and what kind of a mob it really was.

PS. Butchers and such were often moonlighting as executioners since they knew the anatomy pretty well and knew how to handle flesh, joints and veins etc. Pretty gruesome thought but makes sense.