Novels, names and Nottingham (and a tomb) 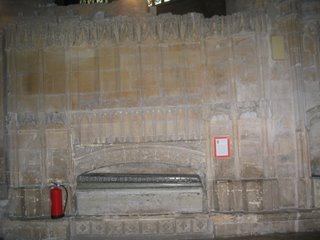 This is the tomb of Hugh le Despenser the younger, buried in Tewkesbury Abbey in late 1330 or early 1331, after the five parts of his body had been on public display around England for four years. The tomb was much mutilated in the sixteenth century, and used to contain forty statues. The coffin actually belongs to Abbot John Cotes, who died in 1347 - and who was probably the man who presided over Hugh's funeral. For some reason, his coffin was placed in the tomb in the seventeenth century. Despenser's remains are presumably underneath.

Barbara Green of the Yorkshire Robin Hood Society has left a long and fascinating comment on an old post, here. Many thanks for that, Barbara! She points out that, contrary to popular belief, the real Robin Hood most likely did not live in Richard I's reign, but in Edward II's. This has inspired me to follow up her references and read more about this. (Anyone watching the BBC's Robin Hood, by the way? I caught the first one during my holiday. One episode was more than enough, I think.)

Remember the romance novel Infamous, that I reviewed a while back? The sequel Notorious is due out next May, starring Jory de Warenne's daughter Brianna. According to this message board, the hero is Roger Mortimer's son....Wolf.

A novel far superior to this one, I'm sure, is currently being written - one that takes place in 1330 and has the hero playing a role in Edward III's coup against Isabella and Roger Mortimer (yes, the one who fathered a son named Wolf. Allegedly.) I don't know the identity of the author, but you can see an extract of her work in progress here. She was also kind enough to leave some comments on the post below this one. Isabella, according to the author, is very much the 'She-Wolf' here - in my view, a welcome antidote to the fawning dissertations, biographies and novels featuring Isabella that are currently fashionable.

And finally, on the subject of Edward III's 1330 coup, Susan Higginbotham has written an excellent post on the subject. The 676th anniversary fell a couple of days ago (assuming my maths is correct; it's been a long week). Susan draws attention to Isabella and Mortimer's foolish behaviour during their regency. They'd invaded England supposedly to liberate the people from the tyranny of the Despenser regime, but proved themselves to be even greedier and less able to command the loyalty of their followers - something all too often conveniently ignored in recent works on Isabella.
Posted by Kathryn Warner at 3:36 pm

I hadn't realised the post below had developed into such an interesting discussion. Posted a comment, too. :)

I wonder how Hugh the younger feels about sharing his tomb with Abbot Cotes?

After hearing about the forthcoming Henley novel, I feel almost sorry for Roger Mortimer. I'm not sure what's worse, being hung at Tyburn or having a twenty-first-century novelist saddle you with a kid called Wolf.

I've met the Edward II theory about Robin Hood elsewhere and I find it much more plausible than the King John/King Richard era. As well as the character of the King, it also fits with the period when the longbow was the battle-winning weapon par excellence - the Hundred Years War (Edward III) and the Scottish Wars of Independence (Edward I/II) both relied heavily on longbow archers and would be a plausible context for a longbow-wielding hero. Not to say that the Robin Hood legend may not be drawing on threads from numerous different eras, much as the King Arthur legend probably did - there's a suggestion that memories of the English resistance to the Normans immediately after 1066 might have contributed to the Robin Hood legend.

I've read one historical novel--Terry Tucker's Woman into the Wolf--that features Robin Hood in the Edward II era. (Edward II, Despenser the younger, and Robin Hood encounter each other, with Robin Hood getting in the last word.)

I'm the anonymous person who made the third comment (about Cotes and Wolf), by the way. Must have been feeling too lazy to input my name.

It's funny, Susan - your comment appeared in my inbox under your name, so I don't know why it's 'anonymous' here.

Is 'Woman into Wolf' worth reading, do you think? I do like the idea of Edward, Despenser and Robin Hood meeting up, but if that's the only decent scene in the novel...

Thanks for the link, Carla - I find all this material about Robin Hood really interesting. Here's the 'Robin Hood Yorkshire' site.

My link was just to my review of The English Resistance which you've proably already seen (maybe even read!?) on my blog - nothing new. Thanks for the link to the society site.

Blogger Beta seems to be a distinctly beta-release and may have eaten your identity, Susan - it's done that to me a few times when trying to post a comment. Hopefully they will sort it out a bit in due course.

Yes, I read it on your blog, Carla - I've also just switched to Beta and the link was playing up! I also have to sign in every time I want to post a comment - it doesn't leave me logged in for long.

Oh no, another one who changed to Beta. :( I have problems reading and commenting most of the time because my computer says Beta isn't safe - and I'mn NOT going to lower my security settings just because Blogger doesn't manage to get the bugs out of the Beta version - or the servers running properly to begin with.

Sorry, Gabriele! :( I'm actually wondering why I bothered, as I don't seem to get any benefits from it, except that publishing a post is much faster than before.

Love the new template and all the new links and pictures! I'm feeling bored with my template now . . .

Thanks, Susan! I think it's easier to read now.

The new layout is pretty.

Really, Blogger should sort out the usual bugs (like being unavaliable for hours on Saturday) before they launch beta versions. ;)

Alianore, there is speculation that Fulke FitzWarin (King John period) was the originator of the Robin Hood legends. The longbow was known in the Welsh marches during the later 13thC when his story was written down. There are a lot of similarities/coincidences between his story and some of the Robin Hood stories, plus place locations. Malcolm Jones, folk historian, has traced the name at least back to the 13thC. I don't have the ref to hand as it's currently packed away in a suitcase. I remain open minded but were I forced to a decision, I'd say Robin Hood started in the early 13thC and was built on from there.

Re the TV series. Watched one episode and that was too much. BBC radio Nottingham has a reviews section. Three episodes into the series, all the discerning commentators seem to have had their say and gone. All that's left are inarticulate text messages from 12yr olds dribbling about how hunky and 'well fit' Jonas Armstrong is. I suppose it has hit its target audience.

Hi Elizabeth, thanks for the comment! I really must start reading up on all this and educating myself properly - it's fascinating. I suppose that's the Fulke of Lords of the White Castle fame?

Agree that one episode of Robin Hood was enough - more than enough. Can't think of a single good thing to say about it, really. If I was 13, I'm sure I'd love it, but as it is...