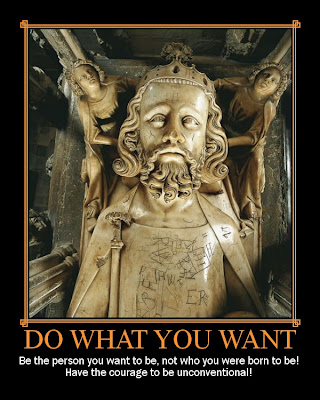 Some blog searches from the last few days:

why was king II edward week
kind edward II Actually, Edward was extremely kind and generous when he felt like it. Also extraordinarily vindictive, of course.

what good things did edward ii do for england Abdicate?

Edward II sop dancer
why was edward second's reign a disaster in 1323 Only in 1323?
FACKS ON EDWORD 5

DAMSELS, NUDE STARKERS
marguerite de valois + obesity
Hugh Despenser the Younger got his c*ck cut off (Without the asterisk.) The number of people who hit this blog looking for information about Hugh Despenser's genitals is quite astonishing.

Did William Wallace and the Queen of Edward 2 of England have a child together Here we go again.

altogether how many men were killed during corfe castle

what happened when caernarfon castle was burnt in 1294 Umm, it burnt?

why was eynsford castle not used after 1312

insulting nicknames for men from Herefordshire

what is queen isabella a lover of? Money, jewellery and Roger Mortimer, not necessarily in that order.

isabella the she wolf carpet plantagenet I assume 'carpet' was meant to be 'Capet'.

what crimes is Queen Isabella of france charged with

anyone think queen isabella of castile was horrible/

What is an interesting story on queen isabella

Ferrando Valentin is the king of England

la grace de dieu lamps how much are they worth

in 1296 to 1327 between england and scotland what happend

when does Edward first bite Isabella Clearly a reference to Stephenie Meyer's Twilight series about vampires (the main characters are called Edward and Bella), but that one certainly gave me a vivid mental image.
Posted by Kathryn Warner at 12:25 pm

On the other hand, insulting tall men from Herefordshire sounds a little risky. Unless you're packing a polled hereford to keep you safe.

You missed a line from the poster; shouldn't it continue:

...but don't be surprised if you come to a sticky end.

BTW, I believe a polled Hereford is a type of Hereford cattle bred without horns. Read all about it here

Carla: ah, but that wouldn't be very inspirational. :)

Gods, some of those are hilarious.

You should rewrite the story of Edward and Isabella (and Piers, and Hugh and all those gay ... em, merry men) with vampires. That would sell. :)

Some of them are so bizarre!

Eleanor of Woodstock - naked? WHAT?

I do like 'Piers Gaveston - soap opera' - I think he would as well!

Loved the idea as Isabella as a Carpet.

I am sure Mortimer walked all over her....

I think we should have an Edward II week too - any idea what we could do to celebrate it? ;-)

I love 'are Elizabeths sometimes called Margaret' and when 'does Edward first bite Isabella ' - oh the picture I have in my mind!

That's the true reason for their troubles. Ed was a vampire (as were Hugh, the Dunheved gang and some others) and Isa is Buffy's mom. No wonder they didn't get along. :)

Alianore, there's a litte award waiting for you on my blog.

Ah, Carla beat me to it about the polled Herefords.

Very interesting blog you have here on all things Edward II.

Edward and Isabella etc as vampires - now there's a novel that'll write itself. :-)

Thank you for the award, Gabriele!

Barbara: thanks for dropping by, and glad you like the blog.

Well, Edward DID disappear from society. Isabella supposedly lies under a parking lot or grocery store. Mortimer MIGHT be buried at Wigmore with his ancestors, or in Shrewsbury, but who really knows? Mortimer's name etymology is "dead water," like a stagnant pond.

That's enough conjecture for me, that they're all undead vampires who needed cover stories in medieval England.