Until I finish my next proper post, about Edward II's siege of Leeds Castle in the autumn of 1321, here are some pretty random photos of various places and things, most of which have sod-all to do with Edward II. Unfortunately I've been too busy at work lately to be able to devote much time to the blog, and also, distracted and upset by news of the terrible flooding in Cumbria, where I come from. Apparently the county has seen the heaviest rainfall in Britain since they started recording it in the early 1700s - over a foot in 24 hours - and lots more rain is forecast in the next few days. Fortunately, both my parents live on high ground and are unaffected, though streets only about a quarter of a mile from my mum's house have been evacuated. The main street of Cockermouth, fifty miles to the north, is under eight feet of water. My dad took this pic of the flooding, half a mile from his house: 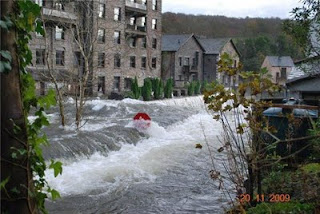 Ulverston, Cumbria (in the distance), during happier, drier times earlier this year, with some of the Cumbrian mountains in the background. This is the place I call 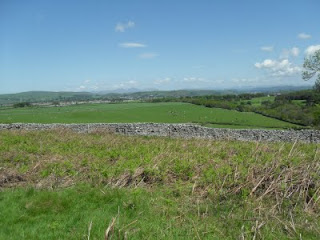 home. Historical fact: Sir Lawrence de Cornwall, who died between 1274 and 1285 and is believed to have been one of the illegitimate sons of Edward II's great-uncle Richard of Cornwall (Henry III's brother) owned lands in Ulverston including a manor house named Neville Hall. Nowadays the police station occupies the site of the hall. 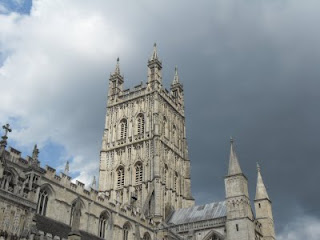 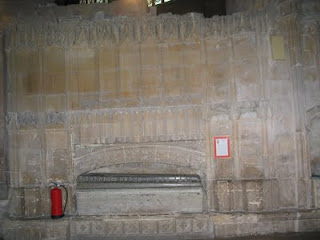 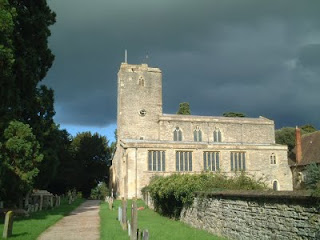 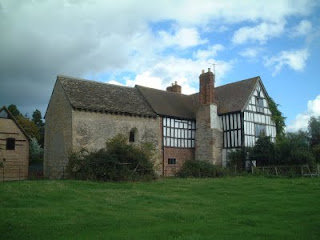 The plain building on the left of this pic is Odda's Chapel, also in Deerhurst, completed around 1056. The farmhouse adjoining it dates from Tudor times. 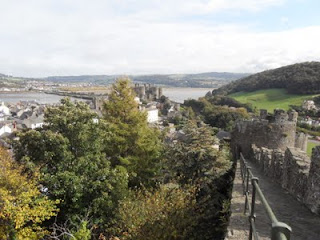 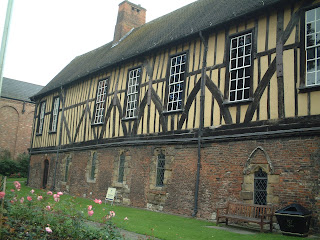 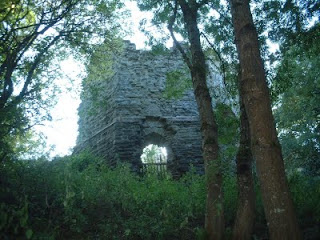 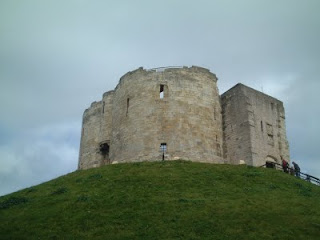 Furness Abbey, Barrow-in-Furness, Cumbria, founded 1127. Which would of course look soooooo much better if I'd actually bothered to get out of the car and 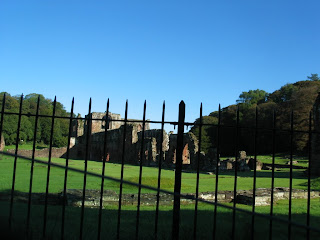 take a proper photograph that didn't include the railings. 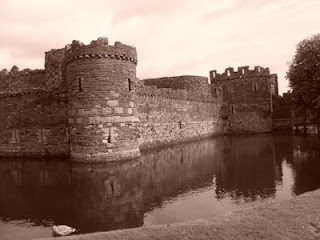 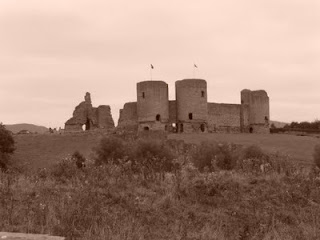 Messing around with the s 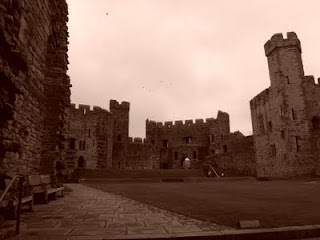 epia function on my camera: the castles of Rhuddlan, Beaumaris and Caernarfon. 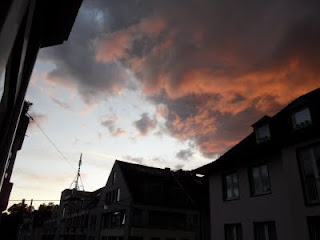 Red sky over the Karlstadt area of Düsseldorf, Germany.

Two pics of the village of Bardsea, near Ulverston, with Morecambe Bay and the Pennines visible in the pic with the rhododendron bushes. 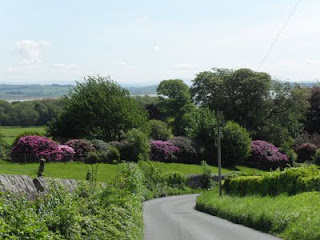 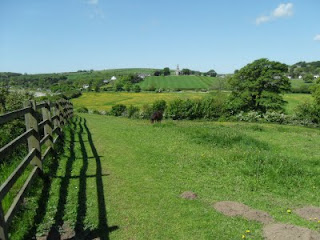 Flowers at Lower Brockhampton, a moated manor house of the late fourteenth century in Worcestershire. 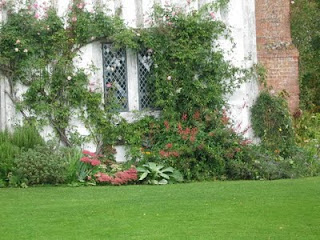 Medieval keys, from an exhibition at Helmsley Castle, Yorkshire. 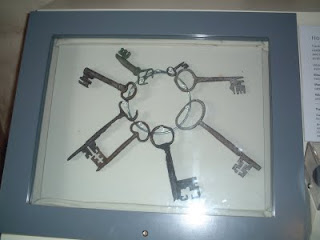 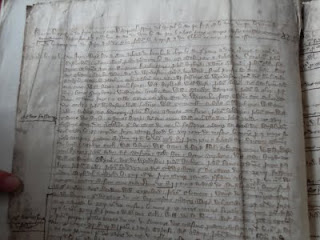 Part of Edward II's chamber account of 1325 (in French), now at the Society of Antiquaries in London. 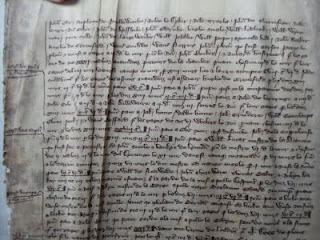 I am shattered when I see the picture of the flood in Cumbria. I did not hear about it until now. Horrible.

Love your photos, especially those of York. I'd so love to live there.

"Richard II is an idiot blog" - this made my day!

Thanks, Ashmodai - I'm really upset about the flooding at home, and that lots of the people I care about are suffering.

Unfortunately, I stupidly managed to delete most of the pics I took in York last time I was there from my camera before I'd saved them onto the computer! It's just an amazing place and I love it. (Best to go in winter though, as it's so horribly touristy in summer!)

That Richard II one made me laugh out loud. Poor Richard!

Goodness, I had no idea the floods were so bad there! Hoping the weather eases up soon.

All of that water is incredible - I hope things improve soon.

Unbelievable flooding-and they are still building new houses in floodable areas in this country!

After seeing all the terrible news on the TV about the flooding and the death of the brave policeman, Jordan still made the front pages of most tabloid papers this morning. Good grief!!

Susan: unfortunately, more heavy rain is forecast in the next few days.

Dear Daphne, many thanks for your truly excellent advice! I'm sure I can get Mortimer in there as a scapegoat, too. Love, Edward. :-)

Clement: you're quite right, and my blood is boiling about that. Thousands of people are suffering, a police officer gives his life to save others, but the papers care more about some daft model and a reality TV show.

That flood pic is scary. Hope things get back to normal soon.

The BBC tonight said the flood waters were abating and the forecast isn't looking as bad as it was. Let's hope they're right. I am really sad for the family of the policeman that died - poor guy was only doing his job.

Nice blog searches - much cleaner than the ones you sent me lol! But dear oh dear 'hughpenis' - now there seems to be an on-going obsession with poor Hugh's genitals!

Gabriele: you should have seen the ones I didn't post here. My eyes!!! :)

Thanks, Marie - glad you liked them!

Lady D: let's see - I'm going to phone the family soon and see what's happening. The weather forecasts for the Furness peninsula are frequently wrong, but I hope they've got it right this time.

Great pics Ms A, although the one your Dad took was extreme and scary. I wish I could send you some of our over 40 degree heat to dry up all those manky flood waters.

Glad you can have a bit of a laugh during this time - totally necessary - not only to take your mind of stuff, but serious food for the soul.

PS. Here is something worthy of a smirk - word verification for me is "movelywo". Isn't that a town or something? *CACK*

Your word verif reminds me of the Polish word 'to speak'!

It has been apocalyptic in Cumbria. I'm glad to hear your family are safe.

It is upsetting to see the horrible flooding that is occurring. Hope it soon ends without too much damage to those that are close to you and for others in the area. Your pictures capture the horror of the rain and also the beauty of the land and historical bldgs.

Thank you, Carla and Barb! It does seem that the nonstop rain has now eased off into frequent heavy showers, so at least the floods aren't getting any worse.

yes, the flooding has been tragic and horrendous - thankfully my area has avoided it, but I don't re-call having such daily downpours like this for years - if ever!

Thanks for posting a real mix of your wonderful photos! Everyone I know loves York!

Great to hear it's been OK where you are, Anerje - I know North Wales really suffered from the floods, too.