Why do some people make it their life's mission to invent hurtful rubbish about people who are no longer here to defend themselves, and get all snidey and huffy when you politely point out that, just maybe, trashing people's posthumous reputations is not very fair?  Why do some people make it their life's mission to get offended by absolutely anything or anyone at all that even slightly disagrees with their opinion, and bang on about another person's respectfully-expressed point of view as though it's a personal attack on them?  Anyway, continuing the Don't Defame The Dead campaign, here are some excellent contributions by friends of mine, and please see also the terrific cards on A Nevill Feast's own Don't Defame The Dead post and Undine's great post Speaking Up For Those Who Can No Longer Speak For Themselves on her equally great World of Edgar Allan Poe blog.  EDIT: Hannah at the Thomas Cromwell Experience has also done a great post on her blog.

To everyone who drones on tediously about poor Isabella and her tragically awful sex life with Edward II, when, dammit, she was desperate for so long for a real manly strong virile man, I give you this: 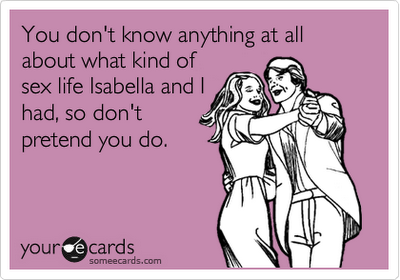 I still get a good laugh at the statement posted on Facebook a while back with as much as certainty as though there was a video camera on the wall of Edward and Isabella's bedchamber: Edward II was "a fastidiously gay guy who begat children on her - note not with her - as a painful duty."  Classic.

"One of the strongest men of his realm."  Not that you'd know it from some books and films. 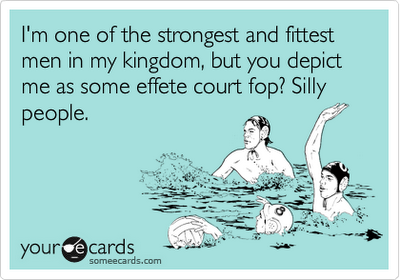 My card about Joan de Geneville, based on my annoyance at novels which turn her into a grossly overweight, unattractive, sexless bore (when they even bother to mention her in the first place): 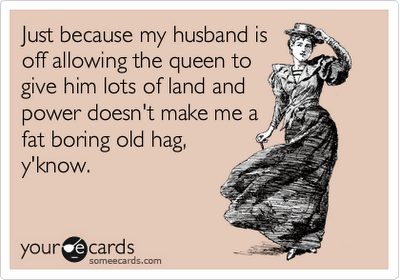 My card about Isabella (which could also apply to Margaret of Anjou): 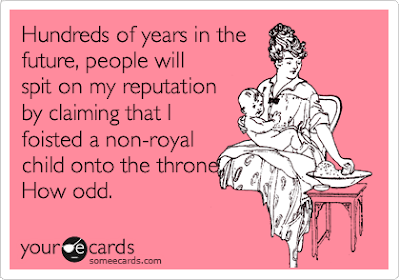 My card about a novel which maligns a fifteenth-century man beyond all my previous notions of maligning by choosing to ignore this essential difference: 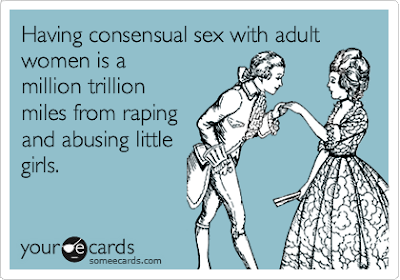 My friend Rachel's card about Isobel MacDuff (of Fife), countess of Buchan (with ref to a novel which turns her husband John Comyn, earl of Buchan into a thuggish rapist who beats her up even when she's pregnant): 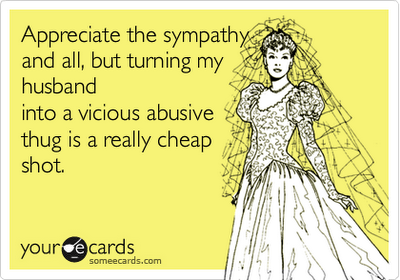 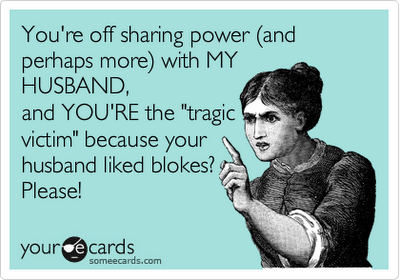 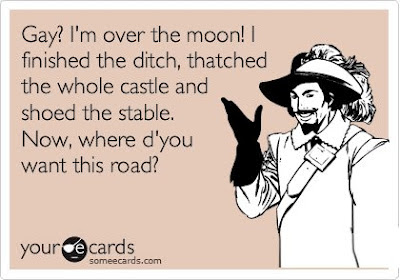 Blogger is up to its usual tricks and being weird so I can't put spaces between some of these cards - that last one was made by my friend Hannah.  You can probably guess who it's about.  :-)

Two made by my friend at A Nevill Feast: 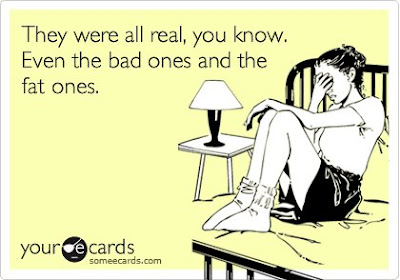 This is about Richard Nevill, earl of Warwick (1428-1471), though could also apply to other men of the Middle Ages deemed 'cruel' for arranging their daughters' marriages (though not their sons' for some reason): 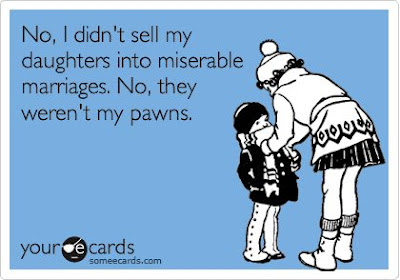 Rachel's card featuring Thomas Boleyn (who has already featured on my blog as one of the indignant people maligned in histfict): 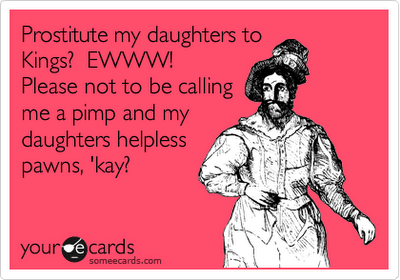 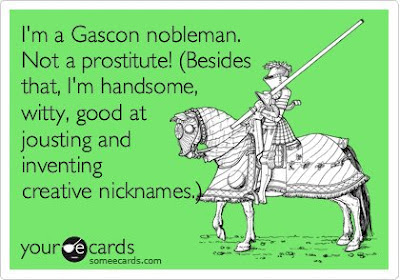 Posted by Kathryn Warner at 3:57 pm

I am LOVING the card giving me a right old giggle. Great stuff everyone.

I've been away for a very long weekend and come back to your very lively blog! Am enjoying the 'Don't defame' etc posts! Well done! You've certainly fired up blog land!

Thanks, Anerje! Glad you enjoyed them, and hope you had a great long weekend!

Just got to reading this. Lovely post. I am really enjoying those cards. Made some for Henry, but still need to write up. :D

Thank you - so glad you like them! :) I'm really enjoying the campaign too, and stuff that man's very silly comments on FB yesterday. Can't wait to see the Henry ones!

How about the other extreme – glorifying the dead?

I am very sorry Kathryn if over the last three years I’ve turned into the historical equivalent of the Devil’s Advocate.

‘The truth is out there’. No the truth is here and under our very noses if we but had the wit to perceive it. And the first thing one needs to perceive it is an open mind. I’ve yet to discover any historian with what I would call an open mind, And that perhaps is the most disturbing discovery of all.

Good point, Trish - turning the dead into perfect saints isn't doing them any favours either! Good luck with being a Devil's Advocate!

I rather think Kathryn that the whole subject of history needs a shake-up. Only yesterday I read that amongst some 200 state schools history is very much a Cinderella subject. And that’s before even consider all the political correctness that’s creeping in. In my time the British Empire was a Good Thing; nowadays it’s the opposite. Heavens above the Dutch, the French, the Portuguese and the Spanish were all there before us and even worse behaved and following unification the Germans and Italians weren’t slow to get in on the act.

Last but not least as some guy said, ‘If we don’t learn from the lessons of the past we are doomed to repeat them in future’ but how are we going to learn, if we don’t even bother to learn about the past?

For once, no, Gabriele. ;) I decided to delete it.

Before I managed to read it. *sigh*

I saw there was a new post but it was late and I was too tired to read it.

BTW The word verification is getting worse every day. I switched mine off a few months ago and I don't get And Blogger actually recommends to switch it off now they have a Spam Detection working. Maybe worth a try.

I saved a copy of it, so can send it to you if you like, if I can have an email address :).

I tried turning it off a couple of weeks ago and was inundated with spam :(. It does land in another folder, but I still got email notifs of it and it was driving me crazy. I'll give it another go maybe because I've noticed on other people's blogs that often I have to try the word verif two or three times before it's accepted, and it's maddening.

Yeah, I have to give it several tries, too. The wiggly words weren't so bad, but the dark numbers on dark background really get me.

That's weird about the spam notifications. I only get those when something got through (not all spam is bots) but not when Blogger puts it into the spam folder right away. I check that every week and shove the bodies out, like I do with my email. :)

You can send the post to alamir23-writing@yahoo.de (I don't use me business email with my real name on the web).

I don't give out my real email address online either, so have an Edward of Caernarfon one. :) Will send the post tomorrow (it's saved on the other computer :)