I have not one but two new books out this month! Blood Roses: The Houses of Lancaster and York Before the Wars of the Roses is already out in the UK: see Amazon; Goodreads; Waterstones; Book Depository. It covers the period from 1245, the year Edmund of Lancaster, founder of the House of Lancaster, was born, to 1400, the year Richard II, deposed by his cousin Henry IV as the first Lancastrian king, died at Pontefract Castle. Blood Roses is divided into four parts: 1245 to 1296, 1296 to 1330, 1330 to 1362, and 1362 to 1400, and an epilogue covers the years 1400 to 1422. There are ten family trees at the front. 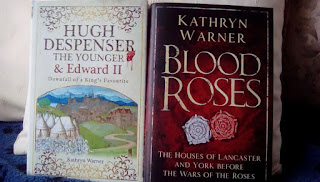 And my bio of Hugh Despenser the Younger, Downfall of a King's Favourite, is out very soon - on Amazon it's showing as already available for sale rather than pre-order, but it also says 'dispatched within one to two months' (!!) so it seems that the copies aren't there yet. It's the first-ever bio of this powerful man who was once voted 'the greatest villain of the fourteenth century' in BBC History Magazine! It's also on Goodreads; Book Depository; Waterstones. There are two appendices, the first a list of Hugh's children* with biographical details and (often approximate) dates of birth and death, and the second Hugh's itinerary from May 1306 - the month of his wedding to Eleanor de Clare - until his execution on 24 November 1326. For the first few years of Edward II's reign it's really hard to establish Hugh's whereabouts except on a handful of days in any year, but after he returned from exile in March 1322 I was able to ascertain his location on many days in any given month. I've translated a few of Hugh's own letters which have never been seen before, except for historians able to read Anglo-Norman. Hugh was a pirate and an extortionist, highly intelligent and articulate, greedy beyond description for lands and money, manipulative to the nth degree, and ruthless. In short, he was huuuuuuge fun to write about and, I hope, will be fun to read about. :-)

* He had at least ten legitimate children, of whom nine (Huchon, Edward, Gilbert, John, Isabella, Joan, Eleanor, Margaret and Elizabeth) survived infancy, and may have been the out-of-wedlock father of Nicholas Litlington, abbot of Westminster (c. 1312/15-1386).

Posted by Kathryn Warner at 2:26 pm

It's a good job Xmas is coming up. I can treat myself to both!

I look forward to reading them

I am so excited to read this. Despenser is an awesome villain. I tweeted at you because of my concern for your insinuations regarding the relationships of Edward and Piers, Edward and Hugh and Isabella and Mortimer. When putting together a piecemeal history, so have to utilize common sense in certain things. Sure there's no porn out with any of these people having relations with each other but that does not mean it didn't happen. If you can name one other ruler who showered as much praise as Edward on another man without a sexual relationship then I will reconsider my position but I feel like you lack the personal experience to understand exactly what seems like common sense. Sorry for the non-softball comment, but I have studied Medieval Western Europe at length and find your conclusions to be far fetched

And I see you filter comments so I assume mine won't be published. I'd still like an explanation if you can provide.

I'll respond here the same way on Twitter - you're entitled to express your opinion but not to comment on my 'personal experience'. That is absolutely none of your business. Don't do that again, please.

I don't filter comments. I publish every single one people leave, except spam.

I just read your recent posts and I find your work incredibly interesting. PS: could you do a post on Edward II traveling to France in 1320 ? It is such a nice event. Regards.

@Unknown, you're either sealioning, trolling or both. Kathryn is under no obligation to provide you with any further explanation - there is a wealth of material on this blog and in her books to "explain" her reasoning on what you seem intent on arguing the toss about, and she owes you no more of her time especially after you have made deliberately insulting comments and made it clear you're not here in good faith.

Discussing the relationships between Edward/Isabella/Piers/Hugh/Eleanor can spark fascinating debates. Kathryn discusses on the evidence available - otherwise she'd be writing fiction :)

This is simply wonderful!

Your body of work is already remarkable and like I've said elsewhere: these books will be used as references, bases for study etc. in many many ways in the future by the academic and non-academic historians, history fans and readers alike. Not only they offer a huge amount of information, they also offer valuable information which would be difficult or nearly impossible to find for an average person or any pro researcher.

Most of all they are wonderfully written and presented books to enjoy if your passion is history and the real history.

And for the Unknown:

Perhaps you should check out the thousands of speeches and favoritism all through the history and you would find few kings and rulers who provided as much or more praise to a man as Edward did with his favorites.

One who comes to mind is Peter the Great: he became friends with a son of a humble stable boy as a child and they were side by side in many trials and tribulations and Peter created him as a noble man, a lord, might have been a duke or similar in status. He trusted his childhood friend who BTW was one of the very very few who told the tsar what he was thinking straight up and did not mince his words. And at no moment, by any account, their relationship had sex involved.

Edward never took a stable boy and made him a noble man. So there is one example of praise off the bat beyond what Edward ever did with no sex at all.