Lance Orlando, Edward II and Isabella, and Me

Lance Orlando, to quote their website, "is a nonprofit organization which exists to provide the highest quality live action experiences and stage combat performances to educate and entertain while striving to promote an active, creative community in the Southeastern United States." They recently held an event at the Orlando Renaissance Festival called 'Isabella and the Unconventional King', a title based on my book Edward II: The Unconventional King. Basically, to settle their differences, Edward and his queen Isabella hold a game of 'battle chess'. Again to quote Lance's website, "Our theme for this year is going to be based on the reign of Edward II of England and Isabella of France. Inspired by the events leading up to and beyond The Despenser War (1321-1322). Watch as our story of betrayal and corruption unfolds on the chessboard."

The great thing is, I am one of the characters taking part in this battle! They wrote me into it! Edward announces me as 'Kathryn Warner, my famous scribe'. And I defeat William Montague with a pen. :-D Here is the video of the entire event on Youtube. I'm mentioned at 43.55, then appear at about 47.28, though can be seen throughout, writing things down with a large pen. :) 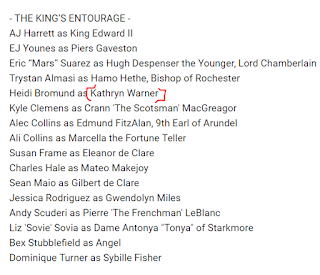 I don't think I've ever been so flattered and thrilled in my entire life!
Posted by Kathryn Warner at 1:59 pm

You certainly deserve all the attention and recognition. You have done a massive research on Edward II, shot down myths and legends, and revealed more medieval England to your audiences than many of the so-called historians have in their entire careers.

Do not be surprised if someone comes up with a play where lady Kathryn Warner and king Edward II have a long dialogue aboput the Truth, Life, Love and other some what heavy issues.

Well deserved praise Kathryn. May I wish you a happy Christmas and new year and look forward to your blogs in 2019. xx