Below is the great hall of Oakham Castle, Rutland, taken by my dad a couple of days ago. The castle was originally built in the late twelfth century. From 1300 to 1312, the castle and barony of Oakham were held as part of her dower lands by Margaret, countess of Cornwall, sister of Gilbert 'the Red' de Clare, earl of Gloucester (1243-95), and widow of Edward I's first cousin Edmund, earl of Cornwall (1249-1300). After Margaret died in September 1312, Edward II granted Oakham to his niece, who was also Margaret's niece and was her namesake, the younger Margaret de Clare, countess of Cornwall, Piers Gaveston's widow. (Most confusingly, between 1307 and 1312 there were two Margaret de Clares, countesses of Cornwall, in England.) After Margaret's second husband Hugh Audley joined the Contrariant rebellion of 1321/22 and they were both imprisoned (Margaret at Sempringham Priory), Edward II gave Oakham to his half-brother Edmund of Woodstock, earl of Kent. The Audleys retrieved it after the king's downfall in 1326/27.


The manor of Essendine in Rutland passed to Hugh Despenser the Younger's second son Edward Despenser (born c. 1310, killed fighting in Brittany in 1342) in 1334 after the deaths of Hugh's mother Isabella Beauchamp's first cousin Idonea Leyburne and her second husband John Cromwell. Edward's eldest son, the future lord of Glamorgan and his uncle Huchon's heir, Edward Despenser the Younger, was born in Essendine in March 1336. A small castle was here in the fourteenth century, though none of it still exists except earthworks and the chapel where Edward Despenser was baptised, which now, rather fascinatingly, is the village church. Here are some photos I took in early July; for more info on the church, see here on British History Online.

The small village of Kettlethorpe a few miles from Lincoln is famous for being the home of Katherine Swynford (d. 1403), long-term mistress and third wife of John of Gaunt, duke of Lancaster, and the great-grandmother of Edward IV and Richard III. Below, the church of St Peter and St Paul in Kettlethorpe, where at least some of John and Katherine's four Beaufort children (John, Henry, Thomas and Joan) may have been baptised in the 1370s. I took the pics on a warm humid overcast morning this July. 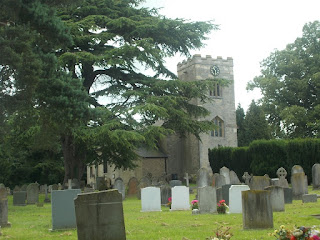 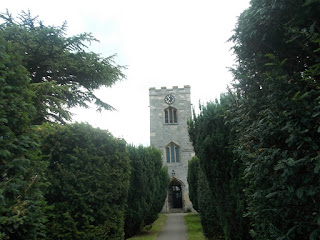 Next to the church, where the Swynfords' manor-house would have stood. 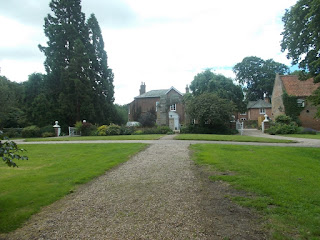 Stow Minster is an ancient church full of rich and glorious delights, which include Anglo-Saxon doorways, a carving on a pillar of a Viking ship assumed to be c. tenth-century, part of a wall painting of Thomas Becket made within thirty or so years of his death, and an inscription on a tomb dated to c. 1300, in Middle English, which states "All men that be in life, pray for Emma [who] was Fulk's wife". 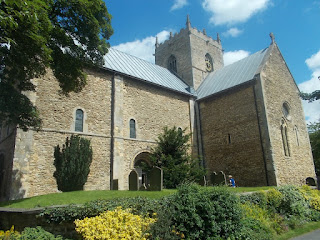 King Philip IV of France and Pope Clement V destroyed the military monastic order of the Knights Templar in and after 1307. This is an extant tower of one of the many buildings the wealthy Templars owned in England, called Temple Bruer (see here for more info). 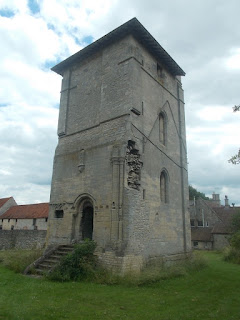 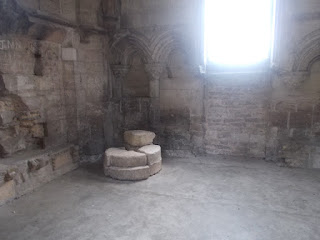 And finally, Somerton Castle, built by Anthony Bek, bishop of Durham and patriarch of Jerusalem, in the 1280s. Bek gave it to Edward II in 1309, and after Edward's deposition it passed to his son and heir Edward III. Edward III kept the king of France captured at the battle of Poitiers, John II, captive at Somerton for a while, and also imprisoned his cousin Margaret, countess of Norfolk, there after she married her second husband Sir Walter Manny without his permission. In c. late 1335, Sir Hugh Frene captured Alice de Lacy, countess of Lincoln, at her own castle of Bolingbroke a few miles away, forcibly married her, and took her to Somerton Castle.

I am extremely grateful to the owners of Somerton, Mr and Mrs Porter, for their kind hospitality and generosity in inviting me to Somerton and letting me have a good look around. 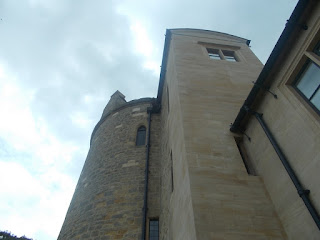 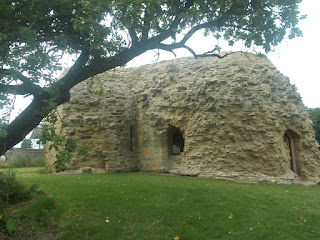 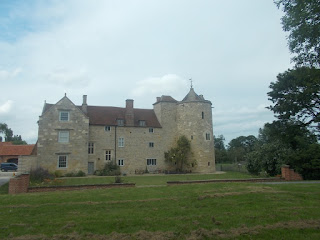 Wonderful photos. What an atmosphere.

Pictures like these make my imagination race a million miles a minute. If one would live in an environment like that one would be inspired to write a story after a story about life in medieval times. Such a rich history around, the old buildings and everything.