This blog has now been running for just over fourteen years, since 3 December 2005! It's yet another festive season, and here's a festive wish to you from me. 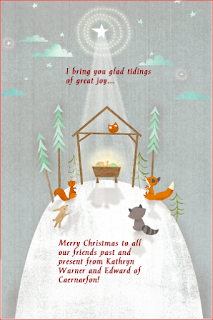 I have an article about Philippa of Hainault, Edward III's queen, in the new issue of BBC History Magazine (the January 2020 issue). I have my copy of it already, though I'm not sure if it's in the shops yet. If not, it surely will be soon. 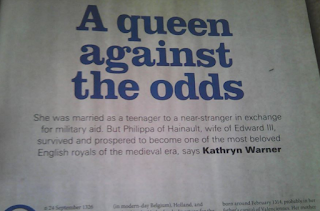 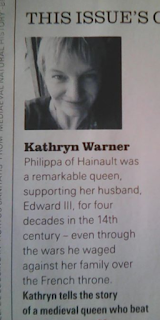 Philippa of Hainault arrived in England at Christmas 1327, just days after the funeral of her father-in-law Edward II, whom she never met, in Gloucester on 20 December. She was most probably just thirteen years old; according to the chronicler Jean Froissart, she was 'almost fourteen' when she married Edward III on or around 25 January 1328, and if he was correct on this point, this would place Philippa's date of birth around February 1314. Contrary to popular modern belief - based on the statement by Froissart that she and her sisters were 'Margerite, Phelippe, Jehanne and Ysabiel' - Philippa was not the second daughter of her parents, but the third. Johanna of Hainault had married the future count of Jülich as far back as February 1324, was already a mother by late 1327, and was certainly older than Queen Philippa. Also contrary to popular modern belief, there is no reason to suppose that Philippa was born on 24 June 1314. Her eldest sister Margaretha, Holy Roman Empress, queen of Germany and Italy, and duchess of Bavaria, was born on (or close to) 24 June 1310, and her date of birth has often been assigned to her sister on no real evidence whatsoever.

The Hainault sisters' mother Jeanne de Valois, countess of Hainault and Holland, gave birth to her youngest child Jan sometime in late 1327 not long before Philippa moved to England, but he died soon after birth. Their brother Louis or Lodewijk (b. 1325) also died in or shortly before October 1327. (Some of Jeanne's grandchildren were older than or the same age as her own youngest children.) The end of 1327 was, therefore, a sad time for Countess Jeanne; she lost two of her sons, the two youngest of her nine or more children, and her third daughter Philippa moved permanently to England. Jeanne's household accounts show that a succession of ladies and 'young ladies' attended the Hainault court at Christmas 1327, 'to visit and console Madame'. And although Philippa of Hainault was to form a very happy and successful, and very long, marriage to Edward III, her situation in her new home was to be a very difficult one for the first few years, with her mother-in-law Isabella of France and Isabella's chief ally Roger Mortimer dominating the government. It would be most interesting to know what young Philippa was thinking when she arrived in her new country, almost exactly 692 years ago.
Posted by Kathryn Warner at 2:56 pm

Thank you for your magnificent work and this blog. It is truly a treasure for any one interested in medieval history in general and Edward II. I wish all the best in this season and wonderful things for the coming year.

There are very few people under the sun whom I truly respect but you are one of them. The work you have done as a writer, researcher, blogger and talker has been tremendous and wonderful. I am fully convinced that you have no idea how widely you are respected and admired nor how big impact your work has among this field of science. For the future generations of historians your work is simply irreplaceable.

And finally, for me personally, you have been a wonderful friend and someone who has always been solid and worth of every bit of trust placed upon you. For that I am most thankful.

It's not in the shops yet - can't wait until it is. Keep up the fabulous writing!

I can't remember what it was called but there was a book in the class "library" which was a bookshelf when I was about 8-9 (many years ago; I had a birthday with a seven and a zero earlier this year) which told the story of Queen Philippa begging for the lives of the burgers of Calais (I thought it was Ca-lay-iss then). The story could have grown with the telling I suppose but I always like to think that Queen Philippa and King Edward had a happy marriage when it seems that the partners in some royal marriages just put up with each other or maybe even worse than that. I will try and seek out your article in the new year.

Hope that you have a great holiday ... and a wonderful new year. BTW, your biography of Philippa is truly fascinating

Thank you, everyone! Merry Christmas!