"Living in Medieval England: The Turbulent Year of 1326"

My new book is out now in the UK! It's a detailed account of the year 1326, with a chapter devoted to each calendar month. I chose 1326 as it's such a dramatic year, when the queen of England invaded her husband's kingdom with an army, so there's quite a bit about what led up to the invasion, but it's far more focused on social history than my previous books are. I wanted to shine a light on the common people of England and how they lived and worked and died, how they dressed, what they earned, what their nicknames were, who they married, how much they paid for things. My main source for the book was Edward II's extant last chamber account, which covers the period from 24 May 1325 to 31 October 1326 and is full of the most delicious details about contemporary life (as well about Edward himself), and I also used chronicles, wills, the chancery rolls, petitions and other documents now in the National Archives, inquisitions post mortem, the London coroners' rolls and city letter-books, the London Assize of Nuisance, etc.

The Kindle version is available as of today in the UK, and is only £4.79! Bargain! Here's the link. Here is the hardback edition of Living in Medieval England on Amazon; it's also available via Book Depository and from the publisher's website. And if you haven't read my biography of Edward II's powerful chamberlain and 'favourite' Hugh Despenser the Younger yet, it's currently only £1.99 on Kindle. My Following in the Footsteps of Edward II, a guide to locations in Britain associated with Edward, is £4.99 on Kindle. 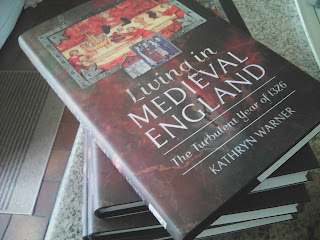 I'd really like to do a contest for one of you to win a free signed hardback copy of Living in Medieval England, but the lockdown in the UK is still on though has been eased quite a bit, and I'm not sure that I should be going to the post office and posting books just yet, unfortunately.

Posted by Kathryn Warner at 1:08 pm

LOVE LOVE LOVE ABSOLUTELY LOVE THIS. I can not think any other medieval king of England who was in such a close terms with commoners than Edward II so it is more than suitable that you chose this year. I am dreaming of the day when we see Edward in a movie as he was, ice swimming in the Thames, shooting breeze with some ladies on the river bank, playing games with commoners and losing his bets, digging ditches etc. You never see this side of him ever in any play, movie or tv-series. Never. Or in any novel for that matter. I so wish that someone would get it and do just that. I understand that his sexuality is a "hot topic" and interesting but for me it is his connection with his people that makes him really stand out from his peers and other rulers. And now, thanks to you, we can read how those common people lived in his time. Thank you very much!

Thanks, Sami! I agree, it's such a fascinating part of who Edward was. You'll read about the people he chatted to in this book ;-)

Has anyone tried to explain why he was so at ease with commoners? Why he was that way?
It really was abnormal and even scandalous according to the standards of his time and yet. there he was, hanging around with the ordinary folks like nothing. It must have driven his valets and bodyguards mad. It did drive barons, church nobles and others mad for real but just imagine being his bodyguard and watching him taking his coat off, taking his shirt off and picking up a shovel and jumping into a ditch. What one could do in that situation?? :-D

I'm not sure there's an explanation that would be more than speculation and trying to read Edward's mind, really. He followed his own path, that's for sure.