A few years ago, I wrote a blog post about my frustration at being unable to find any information about Hugh Chastilon or Chastilloun, tutor of Edward II's illegitimate son Adam in 1322. On a recent visit to the National Archives, I looked at a bundle of documents (E 101/379/5) that relate to the 1322 hunting expedition of the teenaged Hugh 'Huchon' Despenser. As I wrote in that post, Huchon's own tutor was called Hugh Lulleford, and Lulleford accompanied his charge on the months-long hunting trip. At Barnard Castle on 14 September 1323, Lulleford acknowledged that he owed Edward II eleven pounds, five shillings and eleven pence; Edward II was himself at Barnard Castle at the time. Fifth on the list of Lulleford's six mainpernors is 'Hugh de Chastilon'. First on the list is Thomas Borhunt(e), one of the men who accompanied Huchon Despenser on his hunting adventure, and the third name is 'Simon de Redinge', a sergeant-at-arms of the royal household who would be executed alongside Huchon's father Hugh Despenser the Younger in Hereford on 24 November 1326. The names of the other three men, whose identities I don't know, are Robert de Dumbelton, Thomas de Aldone, and William Bacoun. Another hand has added the information that Hugh Lulleford paid the king the money he owed him on 14 November 1323, only slightly late; he was due to pay it around the feast of All Saints (1 November) or the feast of St Martin (11 November). 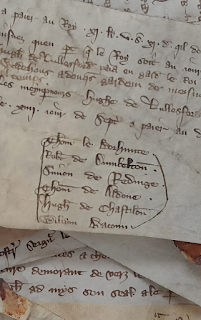 I think it's quite likely that Adam's tutor was the same man as the 'Hugh Castellon' who was appointed keeper of the executed Contrariant John, Lord Mowbray's manor of Kirkby Malzeard in Yorkshire on 20 September 1323, just days after the indenture of 14 September 1323 in which a Hugh Chastilon mainperned Hugh Lulleford's debt to the king. He may also be the 'Hugh Castellion' who was one of the eight mainpernors of John Mauduit, another Contrariant, sometime in 1322. [Calendar of Fine Rolls 1319-27, pp. 156, 240] It also seems very likely to me that Adam's tutor was the same man as the Hugh Chastilon who was one of Hugh Lulleford's mainpernors, almost exactly a year after Adam himself died, still only a teenager, during his father's disastrous last Scottish campaign of the late summer and autumn of 1322.
That's all there is about Hugh Chastilo(u)n, and it's precious little, but at last I've found out something else about him, haha. I'm not sure if his connection to the Despensers means anything very much, as by 1322/23 it was probably pretty difficult for anyone at court not to be associated with them in some way. I'd never heard of Hugh Lulleford before, Huchon Despenser's tutor, and don't know what happened to him after 1326 or anything else about him, though the bundle of documents I looked at in the National Archives shows that he had a wife and a daughter, who are unnamed, and a nephew called Richard de Popleham. There's a list of items given to Lulleford and his family by Edward II, which included a belt of green cloth given to his daughter, and blue cloth, six ells of striped cloth and a jerkin worth three shillings and six pence given to his nephew. The total cost of all the items came to eleven pounds, five shillings and eleven pence, the amount that Lulleford gave back to the king.
Posted by Kathryn Warner at 1:44 pm

Hello! Thank you for another great post! I've been reading this fantastic blog for years and never commented, but since I find Adam so interesting now seems like a good time to start.
I've often wondered about Adam and Hugh's relationship and when it started - would it have been similar to Edward's own relationship with Guy Ferre, starting when he was around 10 years old? Would Adam have been sent to Hugh's household? Or Hugh come to wherever Adam was? And where would that have been? In his father's household or somewhere else, with his mysterious mother?
So many questions!
But that is, I suppose, why Edward's life is so fascinating.

Hi Jacob, welcome! How lovely to hear from you.

Oh my goodness, Edward's life raises so many more questions than it answers, doesn't it?! I would madly love to know the answers to all your terrific questions, especially who Adam's mother was and what became of her. And most of all, I would dearly love to find a reference to Adam before 1322, but sadly I never have. I live in hope. :-)