The Tower Of London, 1

I spent a fantastic few days in London last weekend, mostly to view Edward II's chamber accounts of 1322 to 1326 at the Society of Antiquaries library and the National Archives (thanks to the staff of both places, by the way). Strange people that I am, I jumped up and down with excitement to see the original fourteenth-century documents written by Edward's cler 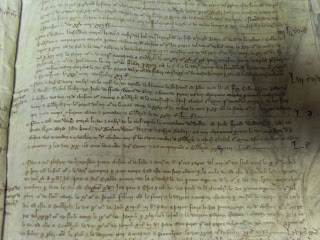 ks! I've posted a random page of the accounts - which are in French - so you can see what they look like.


Last Sunday, I visited the Tower of London - extremely crowded on a warm, sunny weekend. Talking of the Tower, I found an entry in Edward's chamber account of July 1326 where the king spent four pounds on cloths with gold and silver thread for his favourite Hugh Despenser the Younger's chapel in the Tower - which is an interesting revelation in itself, that Despenser had his own chapel there. (Of course the entry doesn't say where it was, frustratingly.) Lots more on Edward's chamber accounts coming soon.
OK, time for some pics! Clicking on them should bring up a larger version, at least if Blogger's behaving itself. And apologies in advance for any formatting weirdnesses. Blogger is not great on photo posts.
If you're visiting the Tower with a tiresome relative and have exhausted the possibilities of the cafe, shop, education centre and church, why not take them along to be beheaded? 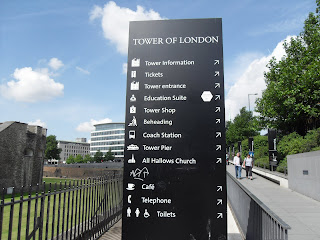 This is the Lanthorn Tower, originally built between about 1220 and 1240, where Edward II mostly stayed when he was at the Tower. Sadly, the original building was destroyed by fire in the 1770s, and this one is a nineteenth-century reconstruction. 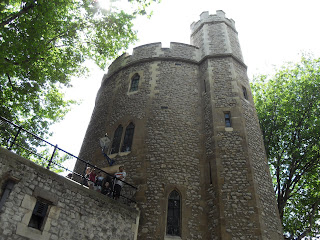 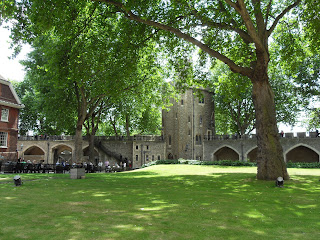 A view of Tower Bridge (far left) and across the Thames from the Lanthorn Tower, as never seen by Edward II. (Bet he'd have appreciated that ice-cream van.) 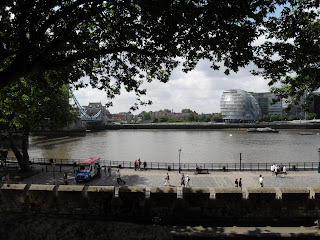 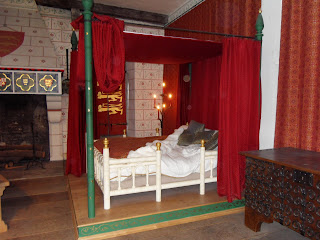 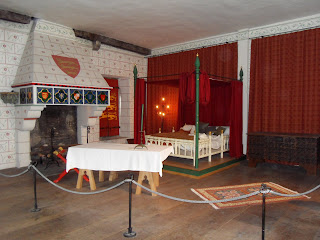 A touchy-feely exhibition of cloths in said bedchamber: 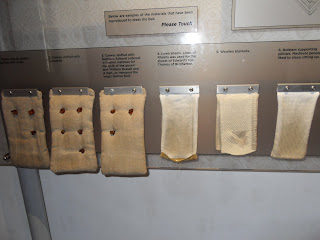 In the Constable Tower, there's an exhibition on the Peasants' Revolt of 1381 (with Lady D's hand in one of the pics!): 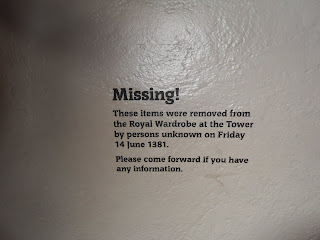 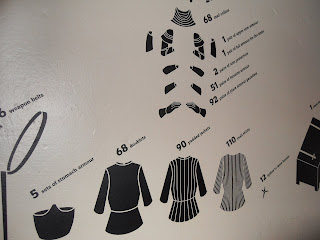 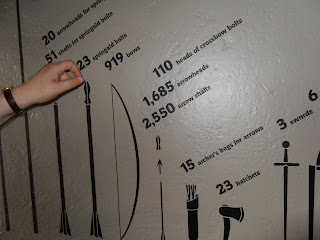 Below: a portable altar of the fourteenth century. Not a great photo - came out a bit blurred with the windows behind me reflected in the protective glass - but an incredibly gorgeous object. 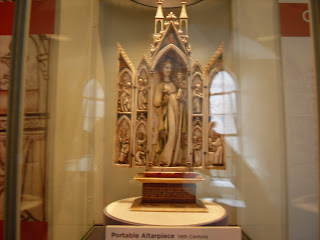 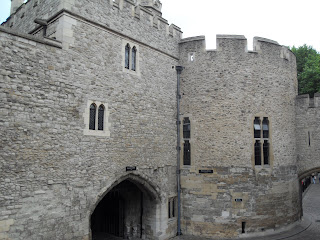 The rounded building on the right of this pic is Wakefield Tower, built in the early thirteenth century, where Henry VI died (or rather, was murdered) in 1471. The rectangular building on the left is Bloody Tower, formerly called Garden Tower, where Edward V and his brother the duke of York were held in 1483. (And possibly murdered. There's a display in the tower where you can vote for who you think murdered them, or if they weren't murdered at all. And no, I'm definitely not wading into that particular argument.) 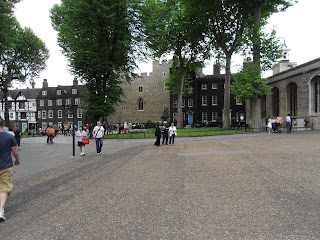 The green area in this pic is the part of Tower Green where executions took place. On the right, the chapel of St Peter ad Vincula; in the middle, the Beauchamp Tower, built by Edward I in the 1270s and named after Thomas Beauchamp, earl of Warwick, imprisoned there by Richard II in 1397. The other buildings in the pic aren't open to the public. 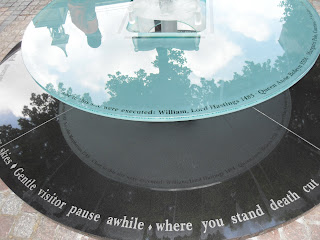 Sculpture commemorating the deaths on Tower Green. The text begins: "Close to this site were executed: William, Lord Hastings 1483 - Queen Anne Boleyn 1536 - Margaret Pole, countess of Salisbury 1541..."
Below: St Thomas's Tower, built by Edward I in the 1270s, and its water gate, later known by its far more notorious name, Traitors' Gate. 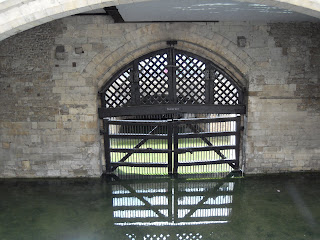 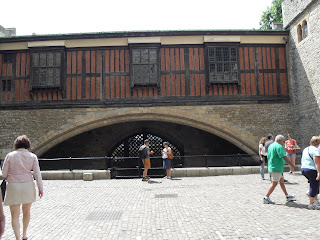 More pics of the Tower to follow soon!
Posted by Kathryn Warner at 3:38 pm

Sounds like you had a great time - and I can share your excitement at seeing an original document written by Edward's clerks!

I LOVE the Tower of London! Haven't been for at least 2 years now, but I always spend hours in there - and they constantly seem to be changing their exhibitions. No doubt, there was a Henry VIII exhibition there? :>

Oh I am sooooo jealous! Would love to have gone with you and Lady D to the tower AND to the archives. Can't wait to see what you write about it all. Glad you had fun - and it looks like the weather was kind.

PS. I would have even gone to the beheading....

Very cool!! Thanks for sharing!!

Yes, there was a Henry VIII exhibition. Of course. :-) It's called Henry VIII: Dressed To Kill, and in fact it was pretty good and I'd have enjoyed it a lot more if I wasn't so sick of the Tudors and their ubiquity.

It must be a fantastic feeling to see all those original medieval documents. Just thinking how old they are ! Wow!

I was amazed to see the reconstruction of Edward I's bedchamber. Did he really have white patterned walls with the royal crest on his chimney? Or did he have the BBC's One Hour Makeover in?

Gabriele: you have such a naughty mind - and I love it! :)

Clement: Thanks! Yes, it was absolutely amazing to touch documents that Ed II's scribes wrote, and that he himself must have seen.

The Tower guide book says that the decoration of the king's chamber are based on "manuscript illuminations, objects and antiquarian drawings" and from accounts of Ed I's mother Eleanor of Provence at the Tower. Love the idea of the makeover team though!

picture of tower of london is really beautifull