The Tower Of London, 2 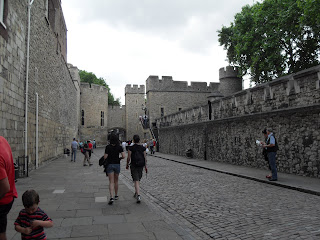 More pics of the Tower of London!

Left: this is Water Lane, which lay under the Thames until the 1270s, when Edward I pushed back the river and extended the Tower, building a new curtain wall. Ahead on the 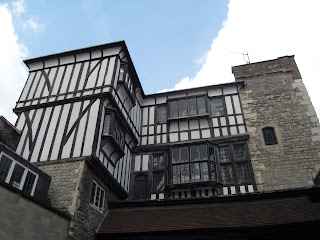 left is Wakefield Tower (the round building) and Bloody Tower; ahead on the right, St Thomas's Tower and Traitors' Gate.
Right: the Byward Tower, which was behind me when I took the photo of Water Lane. It contains wall paintings dating from the reign of Richard II at the end of the fourteenth century, but isn't open to the public. You can see some of the paintings here and here.
Another shot of the Traitors' Gate and St Thomas's Tower. The timber-work dates from 1533, during a renovation of the Tower for Queen Anne Boleyn's coronation. 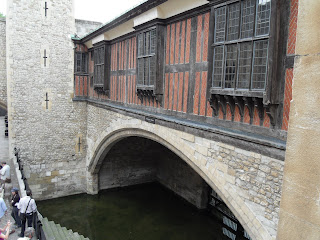 The White Tower, oldest part of the Tower, built by William the Conqueror. In the background on the left is the building which houses the Crown Jewels. In the foreground on the le 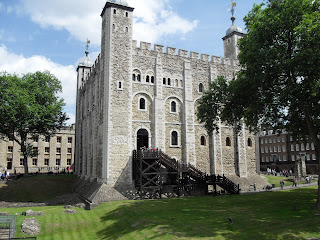 ft you can see the remains of the old wall of the Inmost Ward, built by Henry III. According to the guidebook, these remains were covered over by later buildings and only discovered thanks to bomb damage to the Tower during World War Two.

Next photo: taken from the same spot as the last one, with the White Tower on the right and the remains of the Inmost Ward and some of the famous Tower ravens in the foreground. The low building behind the trees is the chapel of St Peter ad Vincula, with Tower Green in front and the Beauchamp Tower on the left. 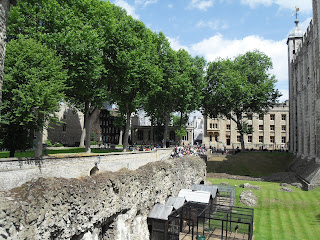 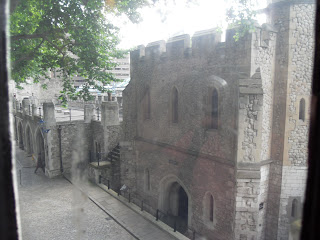 Photo taken out of a window in the Lanthorn Tower (you can see bird droppings on it, which I didn't notice when I took the pic!) of Cradle Tower, built by Edward III as his private watergate. 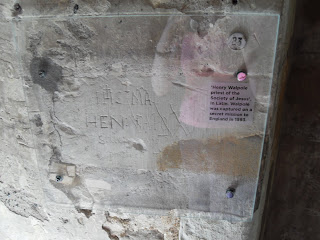 There's a lot of graffitti in the Salt Tower - built c. 1240 - carved in the walls by men imprisoned there in the sixteenth century. Sadly the pics haven't come out well at all, and you can see me reflected in the protective glass in one of them. 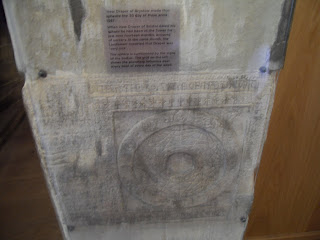 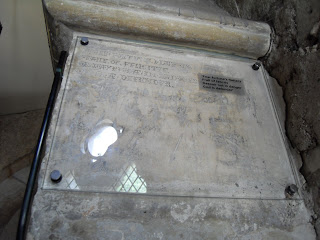 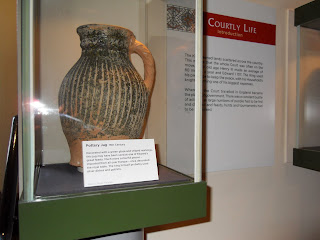 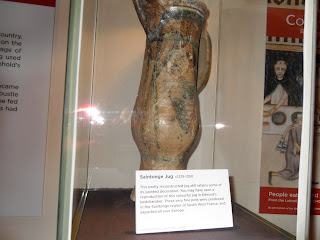 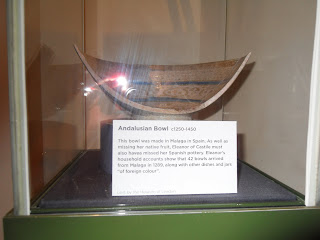 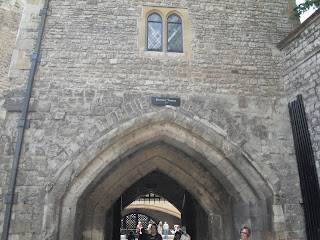 The archway of Bloody Tower, vaulted by Edward III at the beginning of the 1360s. 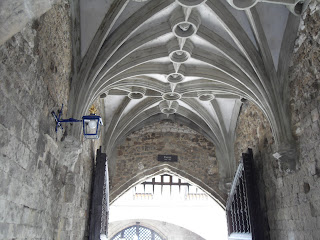 Below, the castle moat. 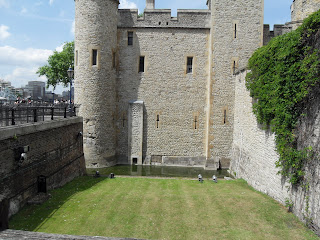 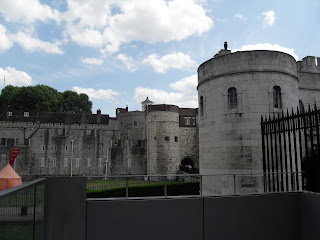 Photo taken from the (modern) entrance to the Tower of London, with Middle Tower on the right and Byward Tower in the, umm, middle, with Water Lane just past Byward. Both were built by Edward I. 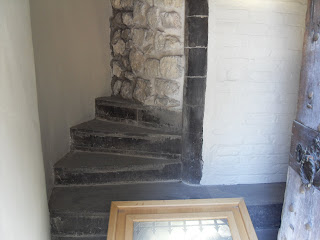 Staircase in the White Tower, where two bodies discovered in 1674 were assumed to be those of the Princes in the Tower. The sign says "The tradition of the Tower has always pointed out this as the stair under which the bones of Edward the 5th and his brother were found in Charles the 2nd's time and from whence they were removed to Westminster Abbey." 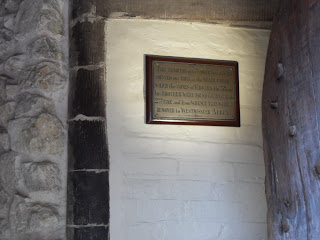 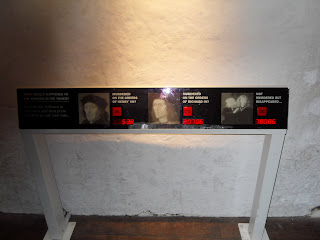 Drawings of how the Tower of London might have appeared in the thirteenth century, in the reigns of Henry III and Edward I. 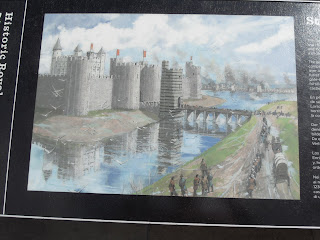 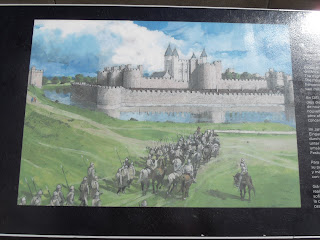 I haven't mentioned Edward II at all in this post, have I? Unlike his father and son, he didn't do any major building work at the Tower, though he did spend a lot of time here in the last year or two of his reign. He was here on 24 February 1325, when he paid Thomelyn Sautriour a pound for playing the psalter before him in his chamber, probably in the Lanthorn Tower.
Posted by Kathryn Warner at 6:11 pm

Wow, the pic of the White Tower (the first one) was just sensational. Helps that the sun was shining, but love how it is composed. I also love the graffiti. So amazing. It reminds me of seeing the graffiti on the coronation chair at Westminster Abbey. Or am I imagining that...?! It has been some years....

Thanks for including us in your sightseeing

Oh how it brings it all back! You would do a wonderful job as a Tower guide you know ;-) It's just such a shame that so much of it is not the original Tower that Edward and Hugh would have known. Still, I suppose we can't have it all!

Kate: I can't remember ever seeing the coronation chair (though I probably did, when I was a kid) so not sure about the graffiti, but I wouldn't be at all surprised - there's lots of 17c/18c graffiti on Ed II's effigy, for example. (Agh!)

Lady D: hehe, something to bear in mind if I fancy a change of career. ;) At least some of the Tower is more or less, to a point, how they would have known it, which is better than nothing, I suppose...Would dearly love to know where Hugh's chapel was!