Documentary: The Quest for Bannockburn

I appeared briefly in BBC2 Scotland's The Quest for Bannockburn on Monday 9 June at 9pm, talking about Edward II and Piers Gaveston. :-)  The programme can be seen here on BBC iPlayer for a few more days, if you're in the UK (if not, there are ways and means of getting a UK IP address...).  It'll be shown on BBC2 in the rest of the UK very soon, probably in late June or early July - I'll post here when I know the date.  With any luck it'll be shown in other countries at some point too, though I don't have any information about that.  Here I am with Neil Oliver at Knaresborough Castle. :-) 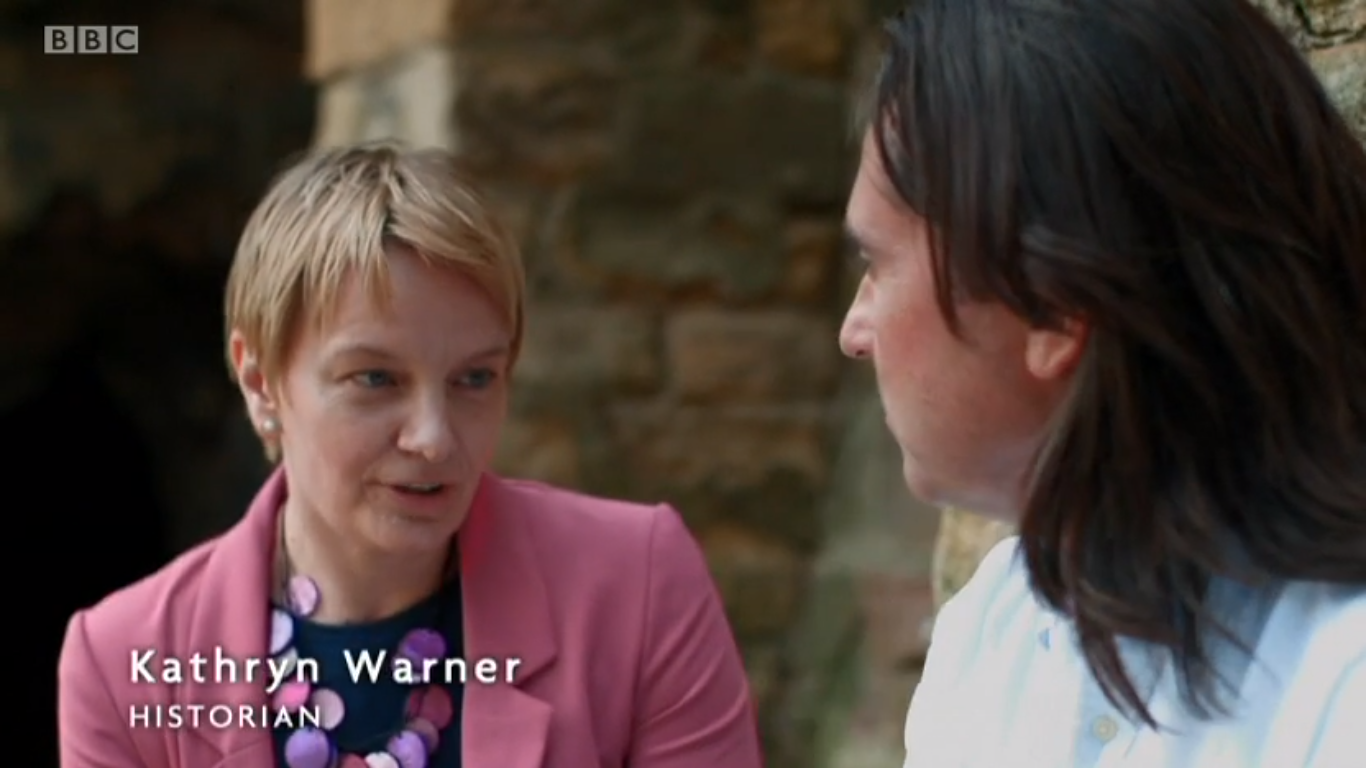 Posted by Kathryn Warner at 1:42 pm

And there she is... The Expert handing out wisdom and truth about certain king to the masses. Great!

I can only say after Sami "And there she is..." :-) I'm looking forward to watching the documentary.

Thanks, Kasia! Really hope you get to see it soon!

As you know, I agree wholeheartedly with Sami and Kasia! Great photo, too!

Congratulations! I loved it! and your expertise and knowledge appear to have been absorbed by Neil Oliver. All this understanding of Piers! Unheard of - and on the BBC;>

Watched both episodes and thought they were excellent programmes of their kind and your little vignette was a high point. But I wish they'd given you a few more seconds to expand on your point (or rather not edited you quite so much).

Thanks, everyone! Yes, would have been nice to be in it more, especially as there was a whole looooong section we filmed on the River Nidd (with Neil rowing me up and down in a small boat for ages) that didn't make it in at all! :-)

I've just watched both episodes of the programme, which I thought was pretty good on the whole, not least the bit that featured you. It's a pity there wasn't more with both you and Michael Prestwich involved, to expand on the relationship Edward had with his barons. Presumably the idea of Neil Oliver rowing you along the river Nidd was to emphasise Edward's interest in activities like rowing, or have I got that wrong?

Well done. I thought you were really good.

Hi Jerry, thank you! Yes, I think that was the idea, and that was what I talked about while on the river (as far as I remember) - Edward's unconventionality, his character, his relationships, his unusual activities.

Hi Kathryn, I've only just caught up with the second part of Bannockburn (long excuse about botched laser treatment) and just wanted to say how great it was to see and hear you. Now when I read your blog I can imagine you actually saying the words. Please keep going. You have a devoted fan base who would miss you if you ever stopped. Loved the jacket by the way!

Thanks so much, Caroline! Really glad you've seen it, and I totally love that jacket :)

Will try to update the blog soon, but am looking after my mum who's been in hospital for a while, so it's a bit tricky.

Marginally on topic, did you see this?