Richard, earl of Arundel - often called Richard Fitzalan by modern writers, though he himself did not use that name - was the son and heir of Edmund, earl of Arundel (1285-1326), and the nephew and heir of John de Warenne, earl of Surrey (1286-1347). Richard's date of birth is not known, but in December 1344 when annulling his first marriage to Hugh Despenser the Younger's daughter Isabella he claimed to have been seven at the time of their wedding on 9 February 1321, so he was probably born in 1313 or the beginning of 1314. On 5 February 1345 at Ditton in Buckinghamshire, Richard married his second wife Eleanor, fifth of the six daughters of Henry, earl of Lancaster (who died a few months later, on 22 September 1345). Eleanor was the widow of John, Lord Beaumont, who died in c. April/May 1342. Richard's son Edmund from his first marriage to Isabella Despenser was made illegitimate by the annulment of his parents' marriage in late 1344. I've written before about Richard's callous and revolting treatment of his eldest child, whom he nastily referred to as "that certain Edmund who claims himself to be my son."

Richard and Eleanor of Lancaster had five children: Richard, earl of Arundel; John, admiral of England; Thomas, bishop of Ely, archbishop of York then archbishop of Canterbury; Joan, countess of Hereford (and Henry V's grandmother); and Alice, countess of Kent. Eleanor of Lancaster, Lady Beaumont and countess of Arundel, died in January 1372, and Richard followed her to the grave almost exactly four years later, in his sixties. He was probably the richest man in England in the entire fourteenth century, or at least one of the top two or three (his brother-in-law, Eleanor's only brother Henry of Grosmont, first duke of Lancaster, was another). Richard wrote his will at Arundel Castle in Sussex on 5 December 1375, a few weeks before he died, asking to be buried at Lewes Priory next to his wife 'Alianore de Lancastre.'  His and Eleanor's children married and had their own children very young, and Arundel was a grandfather many times over when he died; his eldest grandchild was born in 1364. He was particularly fond of his second son John's children, and left John's (unnamed in the will) eldest daughter 1,000 marks or £666. John's younger sons Henry, Edward and William were left 500 marks each. John's eldest son and Arundel's eldest grandchild, also John (b. 1364), was left nothing, and neither were any of Arundel's other grandchildren. They included the great heiresses Eleanor and Mary de Bohun (daughters of the earl of Hereford and Arundel's elder daughter Joan), Elizabeth Fitzalan or Arundel, future countess of Nottingham, countess marshal and duchess of Norfolk (wife of the Thomas Mowbray who was exiled by Richard II in 1398, and eldest child of Arundel's eldest son and successor Richard), and the Holland children of Arundel's younger daughter Alice and her husband Thomas, Richard II's half-brother and earl of Kent, though only two or three of them had been born by late 1375.

The earl of Arundel left 5,000 marks and his house in London called Bermondsey Inn to his second son John, and gave his third son Thomas, then bishop of Ely, 2,000 marks. He also gave his best coronet to his eldest son and successor Richard, his second best coronet to his elder daughter Joan and the third best to his younger daughter Alice. Arundel's sister 'Dame Alaine Lestrange', one of the daughters of Edmund, earl of Arundel executed in 1326, outlived him, and he left her and her children a total of 1,500 marks on top of the 1,000 marks he had given them already. The will also mentions his uncle 'John Arundell.' I don't know who this is, but likely an illegitimate son of Arundel's grandfather Richard, earl of Arundel (1267-1302) and presumably born near the end of that earl of Arundel's life given that he was still alive in 1375. (John wasn't the legitimate son of that earl of Arundel, who joined the Church: see here.)

Richard, earl of Arundel, was massively generous to the people he loved, and told his executors to be "good to my children." That sounds nice, but he did not include his eldest son Edmund (who was already close to fifty when his father died in 1376) whom he had made illegitimate and sneered at as "that certain Edmund who claims himself to be my son." Needless to say, neither Edmund nor his three daughters from his marriage to the earl of Salisbury's daughter Sybil Montacute received anything in the will.
Posted by Kathryn Warner at 3:37 pm 2 comments:

Coming on 30 October 2018: My Bio of Hugh Despenser the Younger

My next published book will be my biography of Edward II's mighty chamberlain and favourite, Hugh Despenser the Younger, lord of Glamorgan. Its current title is Downfall of a King's Favourite: Edward II and Hugh Despenser the Younger, and will be published by Pen and Sword on 30 October 2018. It's the first ever biography of Hugh, and there isn't even an academic thesis about him, so I'm delighted to have had the opportunity to write this one. Plenty of new info about Hugh, insights into his extortions, translations of his letters, plus much, much more!

My sixth book, out maybe also at the end of this year or early next year, will be Blood Roses: A History of the Houses of Lancaster and York, 1245-1400. Plenty of new stuff in this one too, including a section I've just written this weekend about the abduction of Alice de Lacy, countess of Lincoln and dowager countess of Lancaster, in early 1336. Plenty about the seven children of Henry, earl of Lancaster (d. 1345), and the first section is all about Henry's father Edmund, first earl of Lancaster (1245-96), a man rather neglected by historians. It's my first book about a family rather than an individual, and I've had a lot of fun writing it. One project I now have a contract for is The Rise and Fall of a Medieval Family: The Despensers 1261-1439, and I'm also thoroughly enjoying writing a joint bio of Edward II's three de Clare nieces, Eleanor, Margaret and Elizabeth, which will be out next year sometime,
Posted by Kathryn Warner at 3:17 pm 9 comments:

One of the funniest (to my mind, anyway) things about Edward II's chamber accounts and other documents of the era is that his clerks translated English place-names into French, or rather Anglo-Norman, wherever possible. So Newcastle-on-Tyne appears as Noef Chastel sur Tyne, Bury St Edmunds is Bourgh Seint Esmon, Robertsbridge is Pount Robert (the modern French word for bridge is 'pont'), Horsham St Faith is Seinte Foy, and Battle in Sussex is Bataylle. The name of the River Thames was always written Tamyse, London was Loundres, Westminster was Westmoster or Westmouster, Pontefract was Pountfreit, and Lincoln, oddly enough, was always called Nicole or Nichole. In a letter sent by Piers Gaveston, earl of Cornwall, to his retainer Sir Robert Darcy in 1308, Windsor came out as the rather magnificent 'Wyndelesoures' (it was usually spelt 'Wyndesore').
Posted by Kathryn Warner at 1:58 pm 4 comments:

I'm delighted to announce that I have an article in the tenth edition of the biennial peer-reviewed academic essay collection Fourteenth Century England! It comes out on 16 February 2018, in twelve days, and is available from Amazon and the publisher, Boydell and Brewer (academic books are hugely expensive, unfortunately). 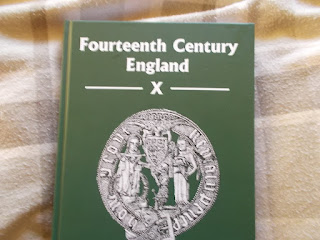 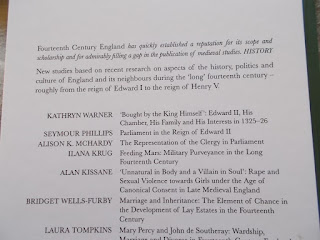 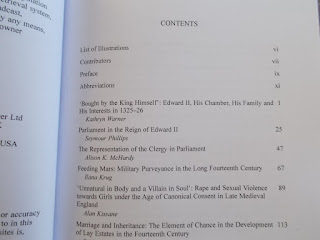 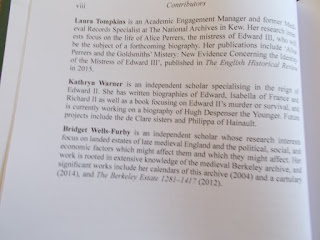