My new book about Edward II's sisters is out now in the UK! 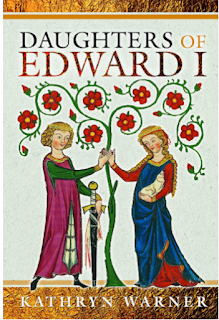 Astonishingly, Edward II might have had as many as eleven older sisters and certainly had at least ten, plus a much younger half-sister (plus three and perhaps four older brothers and two younger half-brothers). The names of two of his older sisters are not known, and the existence of his putative eldest sister, a child perhaps born to Eleanor of Castile in late May 1255 seven months after her wedding, is uncertain.

The sisters were: Katherine (died young in 1264); Joan (d. young in 1265); Eleanor, countess of Bar (1269-98); an infant whose name is unknown (d. young in 1270 or 1271); Joan of Acre, countess of Gloucester (1272-1307); Margaret, duchess of Brabant (b. 1275, d. after March 1333); Berengaria (d. young in 1278); an infant whose name is unknown (d. young in 1278); Mary, nun of Amesbury (1279-1332); and Elizabeth, countess of Holland and Hereford (1282-1316). Edward II's half-sister Eleanor, the third child and only daughter of Edward I and Marguerite of France, was probably born on 6 May 1306 and was twenty-two years Edward II's junior, and died in the late summer or early autumn of 1311. By the time Edward II succeeded his father as king of England in July 1307, only three of his many older sisters were still alive, and only two of them were in England. In the last ten years of his reign, 1316 to 1326, his only sister still alive in England was Mary the nun, though Edward did keep in fairly regular contact with his only other living sister, Margaret, dowager duchess of Brabant (who did not die in 1318, as claimed by Mary Anne Everett Green in the nineteenth century and by numerous later writers who copy Green and don't check properly).