15 August 1342: Wedding of Lionel of Antwerp and Elizabeth de Burgh

Edward III and Philippa of Hainault's third, but second eldest surviving, son Lionel of Antwerp married the heiress Elizabeth de Burgh in the Tower of London on 15 August 1342, the feast of the Assumption. The date is given in the Calendar of Select Plea and Memoranda Rolls of the City of London (vol. 1, 1323-64, p. 153), and confirmed in the Continuatio Chronicarum of the royal clerk Adam Murimuth (ed. E.M. Thompson, p. 125). 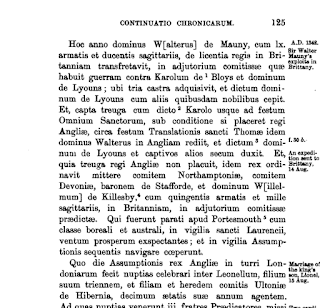 Born in Antwerp on 29 November 1338, Lionel was still only three years old when he married, and it therefore seems highly unlikely that he would have had any memories of his own wedding. On 5 May 1341, Edward III had issued a 'grant that Elizabeth, daughter and heir of William de Burgo, late earl of Ulster, deceased, who held of us in chief, shall marry our dearest son Lionel [Leonello filio nostro carissimo] ... when he is old enough', and evidently being three years and eight and a half months old was deemed 'old enough'. [CPR 1340-43, p. 187; Foedera 1327-44, p. 1159] Incidentally, Lionel's name was spelt Leonell or Lyonell in his own lifetime, revealing its contemporary pronunciation: as in Lionel Messi, not Lionel Ritchie.

As for Elizabeth de Burgh, she was almost six and a half years older than her bridegroom. According to the inquisition post mortem of her father William 'Donn' de Burgh, earl of Ulster, Elizabeth was born on or close to 6 July 1332: in early August 1333, she was said to be 'aged one year on the eve of St Thomas the Martyr last'. [CIPM 1327-36, no. 537] Her father, himself born on 17 September 1312, was not yet twenty when his daughter was born and not yet twenty-one when he died on 6 June 1333, and was a minor in the wardship of the king, his first cousin once removed Edward III, who in fact was two months younger than he was. Elizabeth was surely named in honour of her paternal grandmother Elizabeth de Clare (1295-1360), Lady de Burgh, Edward II's niece. The older Elizabeth mentioned her granddaughter, who was her principal heir, in her will of September 1355, but only thus: 'Item, I bequeath to Lady Elizabeth my [grand]daughter, countess of Ulster, all the debts which my son, her father, owed me on the day he died' (It'm je devise a dame Elizabeth ma fille countesse Dulvestier tote la dette qe mon filz son piere me devoit le jour qil morust). Ouchie.

Elizabeth was her father's sole heir and was his only child, or at least his only child who survived infancy. She alone was named as his heir in his inquisition post mortem. There is some evidence, however, that William de Burgh's widow Maud of Lancaster (c. 1310/12-1377) might have given to birth to posthumous twins. On 16 July 1338, there's a reference on the Patent Roll to 'Isabella, daughter and heir of William, late earl of Ulster'. [CPR 1338-40, p. 115] It is quite possible that this means Elizabeth, as Isabel(la) was a variant of the name and they were sometimes considered interchangeable, though it does seem that by this stage of the fourteenth century they were thought to be separate names, and every other reference to Elizabeth de Burgh that I've found calls her Elizabeth, not Isabella. And on 6 April 1340, Edward III granted the marriage of 'Margaret, daughter and heir of William de Burgh, earl of Ulster' to his sister and brother-in-law Eleanor of Woodstock and Reynald II of Guelders, to use for their second son Eduard (b. 1336). [CPR 1338-40, p. 445] This might, however, be a scribal error; it wasn't unusual for clerks to get names wrong sometimes. Assuming that these two girls ever did exist, they must have died young, and if Maud of Lancaster was pregnant when her husband died in 1333, the jurors at his IPM hadn't heard about it. Assuming that 'Margaret' was an error for Elizabeth, at some point between 6 April 1340 and 5 May 1341 Edward III changed his mind and decided that Elizabeth should marry his son rather than his nephew.

Elizabeth de Burgh was ten when she wed three-year-old Lionel. She was related to him via both her parents: via her father she was a great-great-granddaughter of Edward I, who was Lionel's great-grandfather, and via her mother Maud of Lancaster, she was a great-great-granddaughter of Henry III, also Lionel's great-great-grandfather. Via Maud of Lancaster, Elizabeth was related to pretty well everyone: Henry of Grosmont, first duke of Lancaster, was her uncle, and her first cousins included Henry IV's mother Blanche of Lancaster (b. 1342), Henry Percy (b. 1341) and Thomas Percy (b. c. 1343), earls of Northumberland and Worcester, John, Lord Mowbray (b. 1340), Henry, Lord Beaumont (b. 1339), and Richard Fitzalan, earl of Arundel (b. c. 1347) and his sisters Joan, countess of Hereford and Alice, countess of Kent. Elizabeth was the eldest grandchild of Henry of Lancaster, earl of Lancaster and Leicester, who died in 1345 when she was thirteen, and her much younger half-sister was Maud Ufford (b. late 1345 or early 1346), who married Thomas de Vere, earl of Oxford (d. 1371) and was the mother of Richard II's 'favourite' Robert de Vere, earl of Oxford (1362-92). Elizabeth's namesake great-aunt Elizabeth de Burgh, one of the many sisters of her grandfather John de Burgh (d. 1313), was queen consort of Scotland as the wife of Robert Bruce, and was the mother of David II, king of Scotland (1324-71). Isabella of France was, I assume, the person responsible for granting William de Burgh's marriage rights to her uncle Henry of Lancaster, earl of Lancaster and Leicester, at the start of her son Edward III's reign on 3 February 1327. [CPR 1327-30, p. 8] Sometime that year William married Maud, third of Henry's six daughters, who was close to his own age, so this was a wedding of two people both aged about fourteen or fifteen at the time. Their daughter Elizabeth was born five years after their wedding.

According to the Medieval Lands project on the Foundation for Medieval Genealogy site, Lionel and Elizabeth had another wedding ceremony at Reading Abbey on 9 September 1342 three weeks after they married in the Tower, but no primary source is cited, so I can't confirm this. Edward III was nowhere near Reading in September 1342, spending all that month in Sandwich and Eastry in Kent. By contrast, he was certainly at the Tower of London on 15 August 1342.

Elizabeth de Burgh, countess of Ulster and later duchess of Clarence, gave birth to her only child, Philippa of Clarence, countess of March and Ulster, on 16 August 1355. Rather astonishingly, that was the day after her and Lionel's thirteenth wedding anniversary, and Lionel was still only sixteen when his daughter was born (Elizabeth was twenty-three). I doubt it's a coincidence that Philippa was born thirty-seven weeks after her father's sixteenth birthday on 29 November 1354. The Medieval Lands site states that the marriage was consummated in 1352, which to be honest I find a bit of a bizarre thing to claim, as I'm not sure where something like that would be recorded. Lionel turned fourteen on 29 November 1352, and for sure some noble and royal boys were allowed to consummate their marriages at fourteen, but the only way we know that is because a pregnancy resulted. To give an example, Lionel of Antwerp and Elizabeth de Burgh's grandson Roger Mortimer, fourth earl of March, was born on 11 April 1374, and his and Alianore Holland's daughter Anne Mortimer, countess of Cambridge, was born on 27 December 1388.

Neither of the child-couple who married in August 1342 lived long lives. Elizabeth de Burgh died on 10 December 1363 at the age of thirty-one, and Lionel of Antwerp died in Italy on 17 October 1368 a few weeks short of his thirtieth birthday, having been briefly married a second wife, the Italian noblewoman Violante Visconti. Elizabeth was outlived by her mother Maud of Lancaster, dowager countess of Ulster, who became a canoness after the death of her second husband Sir Ralph Ufford and died on 5 May 1377, a few weeks before her kinsman, Lionel's father Edward III. The couple's daughter and heir Philippa of Clarence gave birth to her eldest child Elizabeth Mortimer in February 1371 when she was fifteen and a half, and if Lionel had still been alive then, he would have become a grandfather at just thirty-two years old. If he'd still been alive at the end of 1388, when Anne Mortimer was born, he would have become a great-grandfather a month after he turned fifty.

Posted by Kathryn Warner at 1:34 pm No comments: