Documentary about Edward II on Arte

Last year, I was interviewed in Cologne for a documentary about Edward II, which was shown on the Arte TV channel (a French-German collaboration) yesterday evening, 16 November. For anyone who reads German, there's more info about the programme here. The documentary is now available on the Arte website, and also features Professors Seymour Phillips and Chris Given-Wilson. It can be seen until 13 February 2020, is fifty-three minutes long, and is mostly in German with English subtitles (with the British historians speaking English, of course). They gave me the last word, heh. Enjoy! :-) 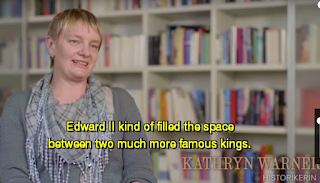 Hugh Audley, made earl of Gloucester by his wife Margaret's first cousin Edward III in 1337, died on 10 November 1347. He was the only one of Edward II's male 'favourites' who survived Edward's reign, and lived long enough to become a respected elderly statesman, a million miles from the frivolous young knight who, with Roger Damory and William Montacute, dominated the middle years of Edward II's reign and who were collectively slammed as 'worse than [Piers] Gaveston' by a chronicler.

Hugh was the second son of Hugh Audley the elder of Stratton Audley in Oxfordshire, who acted as justice of North Wales for part of Edward II's reign and who was briefly steward of Edward's household in 1312. Hugh the younger had an older brother, James, who was their father's heir but is rather obscure and played little role in Edward II's reign. Hugh Audley the elder was also a second son; his elder brother was Nicholas Audley (d. 1299), whose sons Thomas (d. 1307) and Nicholas (d. 1316) I wrote about recently. Hugh Audley the elder married a woman named Isolde, the mother of his children, who was long believed to have been a member of the Mortimer family. Genealogist Douglas Richardson, however, made the excellent discovery in 2017 that Isolde was in fact the daughter of Sir Roger le Rous (d. 1294), sheriff of Gloucestershire and Herefordshire. As well as their sons James and Hugh Audley, Hugh Audley the elder and Isolde le Rous had a daughter Alice, who married firstly Ralph, Lord Greystoke (1299-1323) and secondly Ralph Neville, lord of Raby. Alice Audley's grandson, also Ralph Neville, was made first earl of Westmorland in 1397. Isolde le Rous was married firstly to Walter Balun, who died in 1287, so can only have married Hugh Audley the elder in 1288 or later. Their second son Hugh Audley, earl of Gloucester, was probably born in the early 1290s or thereabouts.

Hugh the younger joined Edward II's household as a knight in late 1311, around the time that Piers Gaveston was sent into his third exile. On 28 April 1317, Hugh married Piers' widow Margaret de Clare, the king's niece. Their only child Margaret the younger, ultimately the elder Margaret's sole heir after her other daughter Joan Gaveston died in early 1325, was born at an uncertain date, probably in the early 1320s. When the elder Margaret died in April 1342, her daughter was said to be either 18 or 20 years old, and when Hugh died in late 1347, she was said to be either 24 or 26. Both Hugh and Margaret were imprisoned after the battle of Boroughbridge in March 1322, so the latest their daughter can have been born was about nine months later, i.e. in late 1322.

Hugh Audley escaped from prison at Nottingham Castle sometime after 14 December 1325, though his wife Margaret, presumably with their little daughter in tow, was not released from Sempringham Priory in Lincolnshire until 11 December 1326. Hugh's brother-in-law and greatest rival Hugh Despenser the Younger had been executed two and a half weeks before, and had Despenser and Edward II not fallen from power in late 1326, Hugh and Margaret would certainly have remained in captivity, perhaps for many more years. Hugh Audley was obviously in Queen Isabella's favour after her husband's downfall in and after late 1326, as she granted him numerous appointments and favours, though like many others, Hugh grew sick of the grasping, self-interested regime which had replaced another grasping, self-interested regime and joined the earl of Lancaster's rebellion against the dowager queen in late 1328. Things improved after Edward III's coup in October 1330, and the young king made Hugh earl of Gloucester, the title once held by his wife's de Clare family, in 1337.

Hugh lost his wife of almost exactly a quarter of a century when Margaret de Clare died in early April 1342, six years after their daughter and heir Margaret the younger was abducted by and forcibly married to Sir Ralph Stafford, later first earl of Stafford. The Staffords had two sons and four daughters, and after their first son the younger Ralph died sometime between November 1344 and November 1347, the Audley/Stafford heir was their second son Hugh Stafford, named after his maternal grandfather. Hugh Audley, earl of Gloucester, died on 10 November 1347 in his mid or late fifties. His grandson Hugh Stafford and granddaughters Elizabeth, Joan and Beatrice Stafford all had children, and although Hugh Audley only had one child, he has untold numbers of descendants.
Posted by Kathryn Warner at 2:50 pm 3 comments: