The Faces of Edward II, Isabella of France, and Others

I recently did a podcast for History Hack about London and Londoners in the first half of the fourteenth century. It's now online; give it a listen here! It's just under 45 minutes long.
Also recently, I had the good fortune to stumble on the Youtube channel of Panagiotis Constantinou, a supremely talented visual artist who recreates the faces of historical figures, including many of the medieval kings of England and their queens, from effigies, sculptures and manuscript images. I won't post screenshots of the faces here because I don't want to deprive Mr Constantinou of any clicks, and I urge you to take a look at his work (all the links below are to his Youtube videos). His recreated faces smile, blink, move their heads, and look very much alive. They're all stunning to behold, and the effect of watching stone or a manuscript image morph into (what appears to be) flesh is incredible. The videos are also very informative about the lives of the people being recreated, and the music is awesome. I have lost an entire day watching and re-watching these so far, and no doubt will lose far more. :-D
Edward II and Isabella of France, based on the effigy on Edward's tomb in Gloucester Cathedral and a sculpture of Isabella's face in Beverley Minster. I have no words for how much I adore both of them.
Henry III and Eleanor of Provence Edward II's grandparents.
Edward I and Eleanor of Castile Edward II's parents.
Edward III and Philippa of Hainault Edward II's son and daughter-in-law. I particularly love the young Edward, aged downwards from the effigy on his tomb in Westminster Abbey. I think he looks rather beautiful rather than merely handsome, which perhaps isn't surprising, given that both of his parents seem to have been very good-looking. Queen Philippa is also 'youthified' from her effigy.
Henry II, Richard Lionheart, King John, Eleanor of Aquitaine
Berengaria of Navarre, queen of Richard Lionheart
Richard II, from the famous portrait of him in Westminster Abbey.
Richard II, John of Gaunt, Henry IV, Henry's queen Joan of Navarre. Mr Constantinou's recreation of Richard II in this one is from the king's effigy, also in Westminster Abbey, with that funny little tufty beard. I'd have loved to see Richard's first queen Anne of Bohemia as well!
Joan of Arc, Henry V, Charles VI and VII of France
Henry VI
Edward IV and Elizabeth Woodville
Richard Neville, earl of Warwick (1428-71), his daughters Isabel, duchess of Clarence and Anne, queen of England, and Isabel's husband George, brother of Edward IV and Richard III
Richard III
Henry VII, Elizabeth of York and their son Arthur
Henry VIII's wives
Posted by Kathryn Warner at 12:35 pm 1 comment:

The latest edition of Mortimer Matters, the journal of the Mortimer History Society, featuring an article by me called 'The Joys of Medieval Sex', is online! I talk about the dangers of 'uterine suffocation' caused by women failing to expel their own sperm by intercourse or menstruation, busybody London officials creeping around the city streets and arresting adulterers in the middle of the night, women describing their husbands' privates as a 'sorry pin' and 'the length of a snail', and much else. :-D My book Sex and Sexuality in Medieval England is available on Amazon UK and Amazon US, or via the Pen&Sword website. 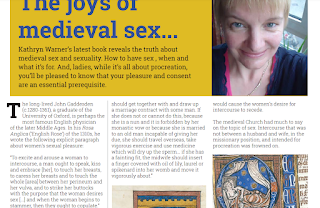 I've done an interview with Kasia on her fantastic blog about Henry the Young King (1155-83), to celebrate its tenth anniversary! Many congrats to Kasia for her hard work! The interview is about fourteenth-century London, based on my book London: A Fourteenth-Century City and Its People (available on Amazon UK and Amazon US).
And I recently did a podcast for History Hack on the topic of fourteenth-century London, also based on my book. It'll be online on 18 November.
If you're in the UK and have a Kindle, my book Daughters of Edward I is currently only £2.99! If you're in the US, it's $3.40.
And last but definitely not least, did you know that William Ockham or Occam, of Occam's Razor fame, was a Franciscan friar from Surrey who was almost exactly the same age as Edward II? William is believed to have been born in or around 1287, and died in 1347. Michael Harmon has written a novel called Invincibilis about him, with Edward II, Hugh Despenser the Younger and Eleanor de Clare as important characters. It's available on Amazon UK and Amazon US. Many thanks to Michael for sending me a copy and for kindly mentioning me in the Acknowledgements! If you're interested in Edward II's fate in 1327, it's well worth a read (and is well worth a read even if you're not particularly!). 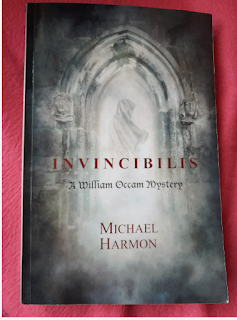