Recent searches which brought visitors to the blog:
which king won wars against scotland and whales and his brother: I know Edward II enjoyed aquatic hobbies, but I'd never heard that he fought a war against whales. Maybe they were easier to beat than sharks.
hanged b*tches, only without the asterisk. I worry about some people. I really do.
facts on queen isabella beginning with a: how about 'facts on Queen Isabella without using the letter 'e'? (No, I don't feel taking up either challenge.)
Now that I'm the proud owner of a scanner, here are some Bad Edward II Novel Covers. (Click on the pics to see a larger image, if you feel like inflicting them on yourself.)
Alice by Sandra Wilson (1976). You'd never guess it from the title or cover, but it's about a woman called, umm, Alice, who becomes Piers Gaveston's mistress. Yup, Piers is decidedly hetero in this one, 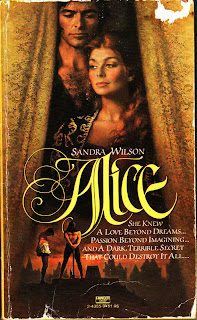 as well as a Goddess worshipper, who resolutely refuses to put out for Edward II no matter how much the king begs him. Poor Edward manages to be both "a giant, strong and muscular" and have a "strange womanish air". Yeah, because there are just so many giant, muscular women, you can see how the confusion might arise. But having said that, the portrayal of him in the novel is pretty sympathetic overall.
Love the cover, with Piers' chest hair and the topless executioner ("Maybe if I adopt a really macho stance with my legs wide apart, no-one will notice my man-boobs!") 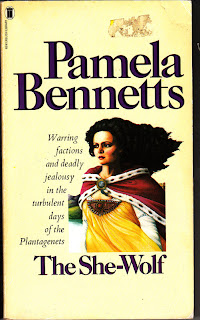 Unusually for an Edward II novel, it opens in 1325, and features Roger Mortimer and Isabella as practically insane with hatred and the need for revenge, and definitely Not Very Nice. 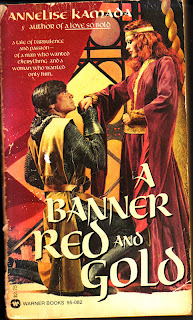 A Banner Red and Gold by Annelise Kamada (1980), wherein "Jehan de Mauley loved Roger Mortimer with a fever that all his cruelty could not diminish...Roger took women recklessly and abandoned them, impelled by a stronger passion - love of power."

The dirty rotter. It's the sequel to A Love So Bold, both of them pretty good romances that star Edward II, Isabella and the usual suspects, including that cad Roger Mortimer and - unusually - the earl of Arundel as a fairly major character.

Where Nobles Tread by Janet Kilbourne (1975), in which Our Heroine Nell beco 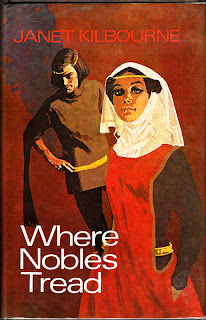 mes the mistress of Piers Gaveston (Piers the womaniser! Who knew?), though Piers shares Edward II's bed with as much enthusiasm as he does Nell's. Edward is much given to "drunken, rutting orgies" and Isabella calls him a 'pig' to his face, though she's not much better herself, taking lovers with wild abandon. No-one seems to notice or care. Isabella tries to seduce Our Hero William, who of course turns her down because he has far too much integrity to take advantage of the seductive little minx, while I'm shrieking 'Just shag her, for goodness' sake! She's the queen, and she's throwing herself at you! How often does anyone get a chance like that??'

It's not the cover of this one that's bad (the dress is accurate for the period, at least), more that the novel itself is splendidly awful, full of stuff like "The Gascon eyes of Piers Gaveston blazed in a drunken wrath as he swayed slightly. 'Nell,' he gritted, 'are you coming?'..."

In fact, Piers 'grits' with alarming frequency. It can't be healthy. The author has a strange allergy to the word 'said', so that the characters grit, pout, croak, hiss, huff, bawl suddenly, retort bitterly, and ooze words, but rarely 'say' anything. (To be fair, the author was only seventeen when she wrote it.)
Harlot Queen, by Hilda Lewis (1970). I assume that's meant to be the very manly Roger Mortimer there, as opposed to the very unmanly (here) Edward II. Isn't there a rule like 'thou shalt remove th 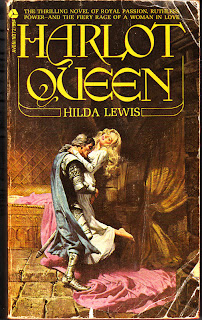 y armour before thou suckest a woman's nipples'? Presumably she's kicking her leg out as an unavoidable bodily reaction to the feel of the armour, and isn't opening her mouth out of passion but to screech "Eeeek, that's freezing, you fool!" And is just me, or is Mortimer's sword sticking out of his cloak in an extremely phallic way?

Harlot Queen has been reissued recently. Personally I much prefer the crappy 1970s cover. Despite some historical inaccuracies, it's a pretty good novel, and has a lovely ending.
Posted by Kathryn Warner at 4:41 pm

That's as much fun as the Smart Bitches weekly cover snark.

Romance really gets the worst ones.

Oh my God! I think I must have read all of those in another lifetime. I definitely remember the Harlot Queen cover. Oh my oh my. Can't remember a bit of the novels, though. That's a mercy.

The cover of "Where Nobles Tread" is CLASSIC. So 1975!!! She almost looks like a nun, who is about to be taken advantage of. The horror! Too funny.

I trust they are all in your personal collection Ms A?

I'm rather of fond the hardback cover for Jean Plaidy's The Follies of the King (my sentimental favorite because it's the first Edward II novel I read). It has two overdressed, foppish-looking men staring dippily at each other. At least the artist read the text, which is more than I can say for the paperback Plaidy (a crowned man, evidently Edward II, kissing a woman, evidently Isabella).

Those are hilarious - and you are right about the sword in the last one (only it seems to be pointing in an awkward direction!).

Gabriele: yeah, I got my inspiration from them (and Daphne's blog on book covers)!

Jeri: in some cases, that definitely is a mercy. ;) (Though to be fair, some of the novels are not bad at all)

Kate: yes, I own all of these, and a lot more Ed II novels, which sadly have more sensible covers. ;)

Susan: I have that copy of Follies of the King, too, but I couldn't find it to scan the cover, unfortunately! Goodness knows what I've done with it.

And what's with poor Isabella's leg? That looks most uncomfortable.

Those are pretty bad! Wow, bright green eyeshadow on the Kamada.

I had to look through my collection to see if I had anything comparable. Have you seen the cover of Terry Tucket's Woman Into Wolf? Isabella is wearing pink lipstick, lots of mascara, and a very low-cut dress.

Susan: she's desperately trying to run away from his cold armour! ;)

Sarah: unfortunately, my copy of Woman into Wolf is an old lbrary copy, and they stuck a plain cover on it - so no pink lipstick and mascara, I'm afraid. Shame!

I can say from personal experience - and no, I am not going into detail! that getting jiggy with a man in full armour is not a very comfortable thing. And chain mail isnt any better either!!! I mean, ladies, they might look nice, but get anything sensitive caught between the plates and ouch! better than a cold shower. So no wonder poor Isabella is screeching! For once I think she deserves her victim status!

Gabriele is right- this is just as good as the SBTB cover snarkage. I love looking at these old covers! (Even if I still haven't been able to make it through "Alice." I have an allergy to anachronistic New Agey goddess worship set in days of yore.)

Thanks! I'm with you on the whole new-agey Goddess thing. It's amazing how often it crops up in Piers novels.

It seems like it has also cropped up in the new "Confessions of Piers Gaveston" novel- or so it seems to me, from the excerpts I've read. That's too bad, because I was looking forward to reading it.

Joanne: yep, that's another one where Piers is a Goddess-worshipper.

Seriously, putting Wiccanism in medieval stories just kills it for me. I'd rather read Robin Maxwell's ridiculous "To the Tower Born" again than subject myself to that sub-Marion Zimmer Bradley goddessy crap. Pre-Christian polytheism is really fascinating, and I feel these books do it a real disservice by making it so simplistic and insipid.

Isablla's hair IS amazing on that cover!

And like Susan, I remember the Follies of the King cover with the 2 men! The recently issued version has, erm, a woman's hands and neck:)