Courtesy of the Catalogue Card Generator... 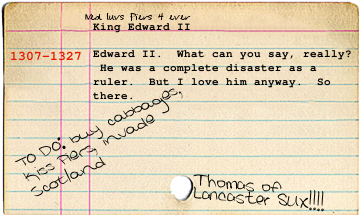 Blog searches from the last couple of days:

Did William Wallace father a child with a future Queen of England? Nope.

forbidden when edward 3 was around because it wasn't war like

what queen isabella did at home during the late middle ages

roger mortimer was of dark complexion

can you marry your cousin in cornwall

what role did queen isabella have in the castle?

Posted by Kathryn Warner at 9:34 am

Must try that catalogue card thing too. If Ed's got one, Hugh should have one too! Mind you, I'm not sure he would approve of all that 'Piers' stuff all over Ed's lol!

Anerje: LOL - Poor Hugh - he had so much to live up to in Piers, didn't he? I'm sure Ed loved him though - just in a different way - for a start he was much better with money and running the country ;-)

Thanks, Anerje! Lady D, Ed makes sure to hide the card whenever Hugh's around. ;)

Lady Di - I can't disagree with your asessement that Hugh was better at running the country than Piers, who just wasn't that interested in doing it. I can visualise Piers draped in jewels singing 'Diamonds are an Earl's best friend':) Much more his interest! and I think it's impossible for ANYONE to live up to Piers;) Hugh did his best.

Brilliant Alianore - for anyone who's interested I've done cards for Roger Mortimer and Isabella on my blog...