Caernarfon Castle and the Birth of Edward II

This is the mighty and magnificent Caernarfon Castle in North Wales, begun by Edward I in 1283. Edward II, aka Edward of Caernarfon, was born here on Tuesday 25 April 1284, sixteen days after Easter Sunday in the twelfth year of his father's reign, as the youngest child of Edward and his first wife Eleanor of Castile. King Edward and Queen Eleanor had spent most of July and August 1283 at Caernarfon, so Edward II wasn't just born here, he may have been co 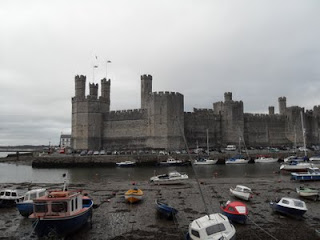 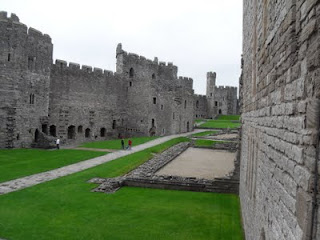 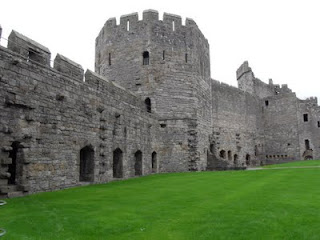 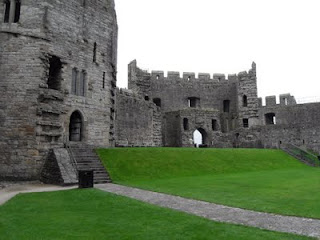 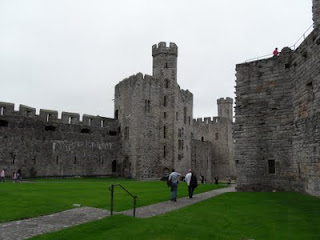 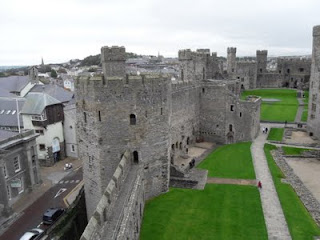 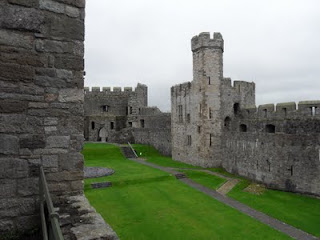 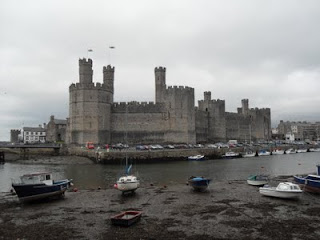 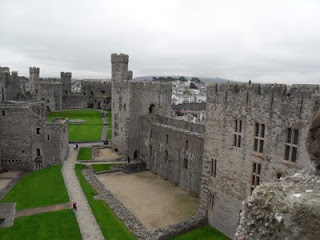 Precisely where Edward II was born remains a matter for debate. Tradition has it that he was born in this small chamber on the first floor (i.e. the second floor fo 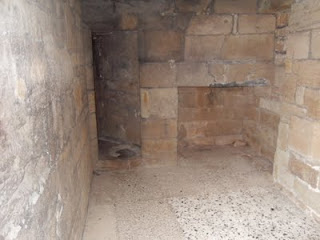 r North American readers) of the Eagle Tower, but as work had only begun on the castle a few months before he was born, it seems more likely that only the ground floor of the tower had been completed by the time of his birth. It's also possible that Edward was born in the older timber castle which had previously stood on the site, or in a temporary timber building. Wherever the exact location, it can hardly have been a comfortable or pleasant experience for Queen Eleanor, who was about forty-two and a half at the time and was giving birth for at least the fourteenth, maybe the sixteenth, time - in the middle of what was basically a building site. 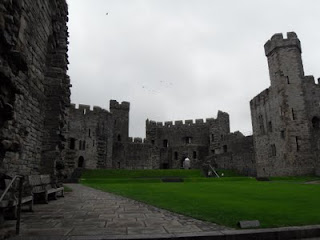 (Photo: the upper ward, with the Granary and North-East Towers and Queen's Gate.)

Unfortunately, Queen Eleanor missed giving birth to Edward II on the feast day of St George - patron saint of England - by two days, and he was born on St Mark's Day, then considered unlucky and a day of ill fortune. (Roger Mortimer was born on the same day, three years later.)

Edward II's elder brother, ten-year-old Alfonso, was still alive at the time of his birth - he was born at Bayonne in November 1273 and his premature death in August 1284 tragically deprived England of having a king named 'Alfonso of Bayonne' - so Edward wasn't in fact born as heir to the throne. Two other brothers, John and Henry, had die 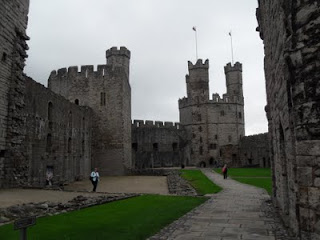 d aged five in 1271 and aged six in 1274 respectively; a few kings of England, such as Henry VIII and Charles I, have been second sons, but Edward II was a fourth son.

(Photo: the lower ward, with the Queen's Tower and Eagle Tower on the right, with the flags flying.)


The often-repeated story that Edward I tricked the Welsh lords by promising them a prince who spoke no English and then presenting his infant son to them, is nonsense, by the way, and wasn't invented until centuries later. It makes no sense for a number of reasons, not least because Edward I and II and their courts spoke French rather t 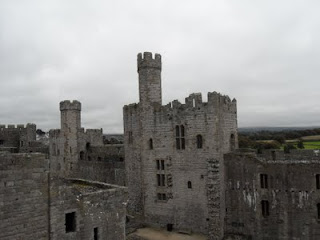 
(Photo: the Chamberlain Tower, with the Black Tower off to the left and King's Gate in the forefront.)


Edward was christened at Caernarfon on 1 May; if there's a record somewhere of who his godparents were, I've never seen it. His first wetnurse was the Welsh woman Mariota or Mary Maunsel, who only held the position for a few months until illness forced her to retire and she was replaced by the Englishwoman Alice de Leygrave, later a damsel of Isabella of France. As late as 1312, when Edward was twenty-eight, he granted Mariota an annual income of five pounds - a generous amount for a woman of her status - having previously given her 73 acres of land in Caernarfon rent-free for life. He also paid for her to travel from Caernarfon to visit him on occasion.
Edward and his retinue had arrived in England by the late summer of 1284, around the time that his brother Alfonso died on 19 August and he suddenly became far more important as the heir to the throne, and would not return to the country of his birth until he was created prince of Wales in 1301. 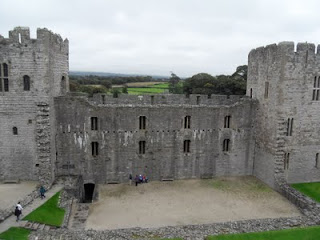 This used to be the Great Hal 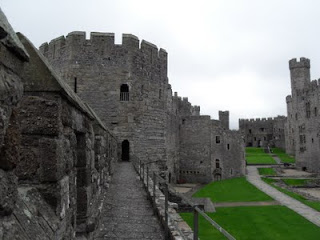 l, flanked by the Queen's Tower (right) and Chamberlain Tower.

Looking towards King's Gate from the wall-walk near the Well Tower. The kitchens are below.


(Below) Eagle Tower seen through a window in King's Gate. 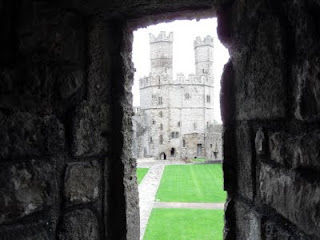 The last pics are of corridors, doorways and stairs in the castle. Caernarfon has more steep narrow winding staircases than any other castle I've ever visited, which is something of a prob 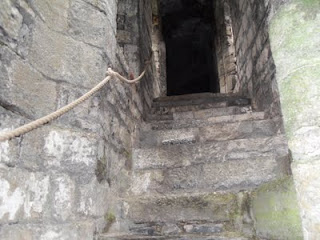 lem when you're as scared of steep narrow winding staircases as I am. For Edward II's sake, I climbed up and down every single bloody one of them, and I hope he appreciates the sacrifice. You can just see me at the end of one corridor, in a light pink coat (yes, it's m 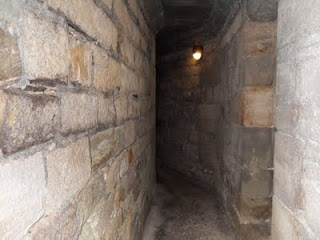 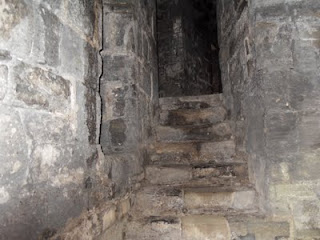 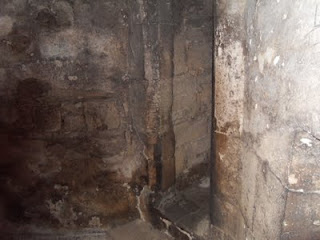 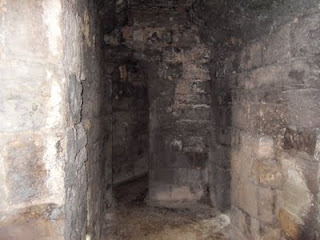 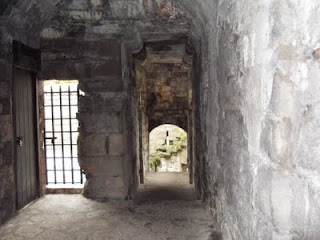 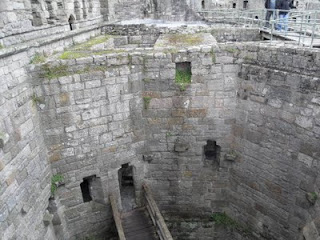 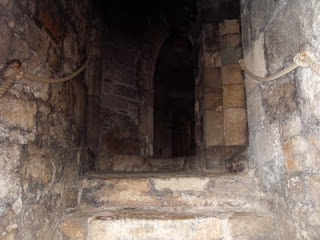 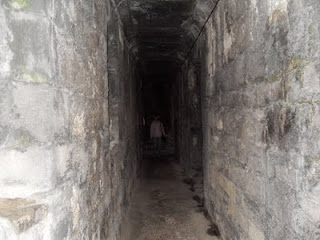 For info on the history and building of Caernarfon Castle, see this page. I have a ton more pics of Caernarfon and I'll probably post more of them here at some point, as well as pics of Conwy and Beaumaris.
Posted by Kathryn Warner at 6:46 pm

Fabulous pictures! It is a stunning castle.

Wonderful Alianore! Imagine all the feet that have trod those dark and winding stairs...the rushing, and grumbling...the laughing and fear. Wish those stairs could talk...

I don't mind the dark and winding stairs but I mind heigths. I'm still mad at myself that I didn't go up all the way to the top of Eagle's Tower. I'll got back and remedy that sone day, I swear. :)

I've been there! I've been there! Sadly, my poor traveling companion was not as enthused about the historical significance of the place as I was. She didn't like heights, and so she sat down below on the grass while I raced up one of those narrow, winding staircases to look out over the town - and forgot about her for 3/4 of an hour. I'm quite sure I was sucked into a wormhole and delivered to the late 13th century.

Thanks for posing all the fabulous pictures, Alianore!

Thanks for climbing all those stairs for our benefit as well as yours :) The pictures are great and I appreciate you pointing out the different towers from the various vantage points. I am able to sympathize with the terror of climbing narrow stairs as I almost had a complete panic attack climbing the bell tower stairs at York Minster. We were almost to the top when the fire alarm went off! I mean, really!

Anerje: hope you get a chance to visit it again soon.

Kate: wow, how poetic and lovely!

Gabriele: I hate heights, too, and was terrified at the top of the Eagle Tower. Great view, but I was clinging on to the wall for dear life!

Gemini: thanks, glad you liked them! It's an easy place to get lost in the past, that's for sure.

Elizabeth: oh no, what awful timing! You poor thing. I'd have had a heart attack, too!

Loved the pictures! I'm so jealous! (And I hang onto stair rails for dear life, even in new buildings.)

Hope you get to visit Caernarfon one day, Susan! I clung to the rope handrail up and down those staircases for dear life.

Thanks for reminding me of the magnificence that is Caernarfon Castle. I have some very fond memories of the place, visited first when I was 17 and in love with my future husband. We very much enjoyed exploring the dark, narrow passages in the castle - nuff said!

The next time I came back it was in my 20s as part of Plantagenet Society to do a re-enactment, so I didn't really see much of the place that time. But both times were way before I knew about Edward II so I must now go and revisit.

Thanks for the great pics Alianore - if anything, the weather makes the place look even more imposing.

It has some great views of the Menai Straits.
If so many people have issues with the height. You wonder why they do not put in a lift.