My articles and a BBC documentary

BBC History Magazine asked me to write a profile of Edward II, and here it is on their website!  I'd just like to point out that I didn't write the bullet points, by the way - only the text beginning 'Life' is mine.  Great to see myself in BBC History Magazine. ;)  I'm not sure if the profile will also appear in the printed edition - if so, maybe in the next issue, in July.

And I've also had an article about Edward published on the History Vault website. Hoping to write more for them soon!

Coming soon: a two-part, two-hour documentary on BBC 2 to mark the 700th anniversary this year of the great battle of 23/24 June 1314, called The Quest for Bannockburn, for which I was interviewed by Neil Oliver about Edward II.  I'll appear in part two. :)  The documentary will be broadcast at 9pm next Monday and the following Monday, 2 and 9 June, in Scotland, and sometime in late June in the rest of the UK - will let you know the date when I get it.  Here's lots of info about the programme on BBC iPlayer.  I met Neil and the crew in Knaresborough, North Yorkshire last summer, and they filmed Neil interviewing me while rowing me up and down the River Nidd (with a few people watching us from the bank and recording us on their mobiles!) and then more filming at the castle, which once belonged to Piers Gaveston.  It was a lovely warm sunny day and it was just a spectacularly awesome experience - famous TV presenter rowing me up and down a river for over an hour, ohhh my!  I cannot for the life of me remember now anything I said about Edward, except that we talked about Braveheart at one point.  :-)  I know I focused on personal aspects, Edward's personality, abilities (or not), relationship with Piers Gaveston and so on.  The only other person interviewed about Edward for the documentary was Professor Michael Prestwich, who talked more about political issues.

More information coming when I have it!  And here's a pic of Neil Oliver and me, after we finished the river section and had lunch with the crew before moving up to the castle.  I also had to wear a red life-vest on the boat, which clashed hideously with my bright pink jacket. :-D 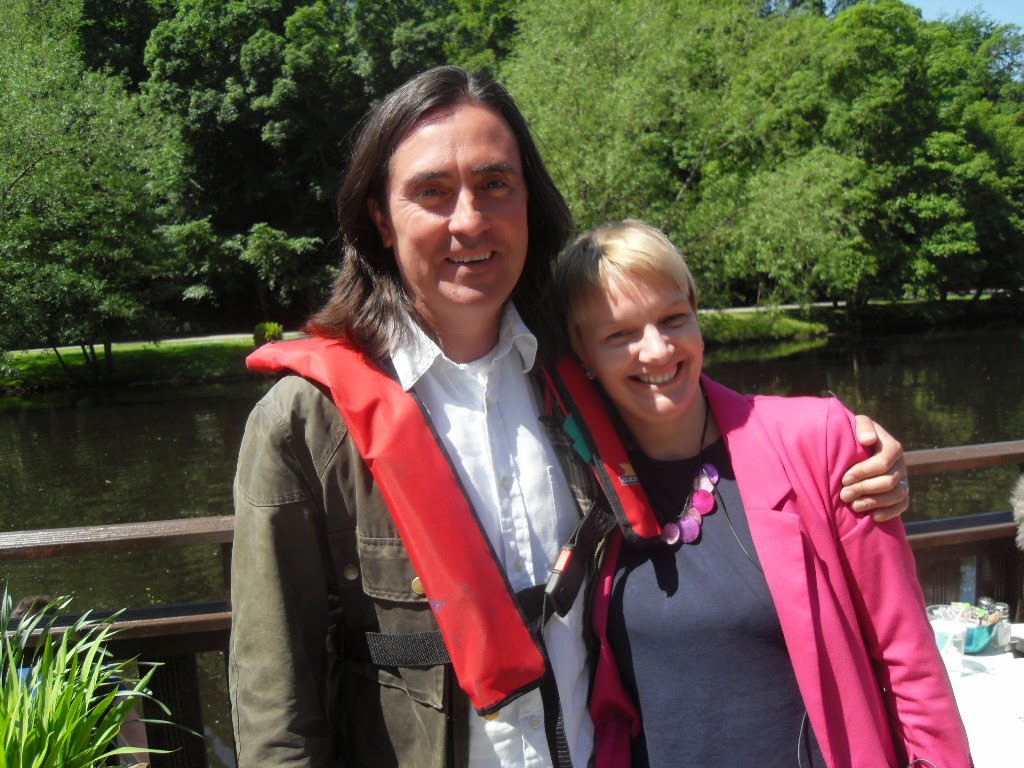 Posted by Kathryn Warner at 1:01 pm

Great pic, Kathryn, and I am so looking forward to seeing the documentary - somehow! It must be so satisfying to see your work being recognised in such a public forum,
5852324

Congratulations, dear Kathryn! I do hope I will be able to see the documentary where I live. I promise I'll do my best to do it :-)

Thanks, Kasia! Really hope you can see it sometime! :-)

I have been following your facebookpage for some time, great postings> BBC History magazine is a monthly must for the last 15 years, and I read all N.Olivers books, and seen his programs. So this combination is just awesome. Congratulations. I will definitely read the BBC magazine article and look up the BBC player.

And so, The Star was born!

Fantastic, great article in BBC Magazine (monthly reading the last 15 years), will be looking forward for the BBC documentary.

Looked those clips form the BBC and it looks pretty well done indeed, the way it should be as BBC has been known for its quality. Now I am waiting too see and hear your bit on the programme!

Fantastic!!! So happy for you. All very well deserved. And such a lovely photo! xx :)

Sami, I'm dying to see it too!

I hope that the documentary makes it to youtube (no BBC on my cable); but congratulations ... your work is now getting recognized!

Despite knowing all this for a while, I'm still going to say yet again - congratulations! I'm thrilled your talent and expertise has been recognised!

Congratulations! I live in the U.S., but I hope I'll be able to see the documentary online at some point.

So pleased for you Kathryn - and for Edward. hopefully the truth can now be heard by the whole world and no more stupid searches for Mel gibson being the father of Edward 111
- oops i mean William Wallace.

So pleased for you Kathryn - and for Edward. hopefully the truth can now be heard by the whole world and no more stupid searches for Mel gibson being the father of Edward 111
- oops i mean William Wallace.

Thanks, Esther, Anerje, Undine and Paula! I hope everyone gets to see the documentary somewhere, somehow ;-) And I'm so thrilled that Edward's real story is getting out there!

Love the article, but wish you had noted that Gaveston was murdered (an illegal act), rather than executed (a legal act) by the earls. As a Gaveston fan, I have never accepted their supposed trial. Glad you took on the Mel Gibson/Braveheart crowd.

Kathryn, what else can I say. You have arrived!!! And personally I quite like pink and red together - sort of classy. Sorry I haven't posted any comments recently but work gets in the way. I do read everything you write and I am constantly impressed by your dedication, your accuracy and the sheer hard work it must be to get all this information out there to us mere mortals. Keep going.

I bet William Wallace of Hollywoodland is gettin pretty upset pretty soon! And queen Sophie Marceu too... No, wait...

PS. Sorry Kathryn, I just had to.

Congratulations! I hope I can see it at some point, hopefully Youtube will come through at least :). As for the red and pink, aren't bright, albeit clashing colours suitably medieval?

Wow, congratulations Kathryn! I look forward to seeing the documentary.

CongRATulations, Kathryn! But you already know how delighted I am that you're finally receiving the recognition you deserve as the ultimate authority on Edward.

Along with your other fans and followers above, I'm hoping the documentary will appear on YouTube. After all, "Killer Queens" and "She Wolves" are on there. Why not a program of quality? Or, if I'm really fortunate, it will air on the American History Channel between "Ax Men" and "Big Rig Bounty Hunters". Or maybe twixt "Appalachian Outlaws" and "Ancient Aliens--The Series". O! I am so overcome with patriotism right now that I must stop writing immediately and recite the pledge of allegiance--NOT.

Yes. I am being a wise-"arse". And, yes. Those are actual shows.

But with the utmost respect--and I'm sure you realize beyond a doubt that I genuinely feel it--I'm afraid that I must agree with Mr. Rogan. If the article for BBC History Magazine does appear in print, would it be possible to change the word "executed" to "murdered"? Please forgive me, but you know how I love Piers!

Both are excellent pieces, Kathryn, and I look forward to seeing more! I'm also eagerly awaiting the chance to read the biography. And don't forget the novel!

P.S. Great photo of you and Neil Oliver!

Congrats! You rock so hard!
And we knew you when.

Fame at last! Congratulations, particularly as the only interviewees about Edward were just yourself and Professor Michael Prestwich. (Was he rowed up and down the river Nidd as well, or was he interviewed in some more boring old TV studio?)

I really look forward to watching these programmes.

Thanks for the great comments, everyone! :) So grateful for your support!

I've just watched part one of the documentary and so far, so good - I can't fault much at all. Looking forward to seeing you in the next one! It's good - no, excellent - to see your work being recognised after all these years - you thoroughly deserve it :-) xx