The Three Daughters of Edmund Arundel and Sybil Montacute

I've written before about Sir Edmund Arundel, grandson of Hugh Despenser the Younger, only child of Richard, earl of Arundel (c. 1313-76) and his first wife, Edward I's great-granddaughter Isabella Despenser (c. 1312-after 1356). Edmund was made illegitimate on the annulment of his parents' marriage in late 1344. His date of birth isn't recorded, but according to the pope he was eighteen in late 1344 and twenty in early 1347, and would therefore seem to have been born before the end of 1326 when his parents were only at the start of their teens. [1] It's possible that he had already been born when both of his grandfathers, Hugh Despenser and Edmund, earl of Arundel, were executed a week apart in November 1326. Edmund Arundel was the much older half-brother of Joan, countess of Hereford, Essex and Northampton (d. 1419), Richard, earl of Arundel (executed 1397), Alice, countess of Kent (d. 1416), John, marshal of England (drowned 1379), and Thomas Arundel, archbishop of Canterbury (d. 1414).

At an unknown date, Edmund married Sybil Montacute, daughter of William Montacute, earl of Salisbury (1301-44) and Katherine Grandisson. Sybil's brother William, earl of Salisbury was born in June 1328, her sister Elizabeth married firstly Giles, Lord Badlesmere (1314-38), secondly Hugh, Lord Despenser (1308/9-49) and thirdly Sir Guy Bryan (d. 1390), and another sister, Philippa, married Roger Mortimer, second earl of March (1328-60). It seems highly likely that Edmund Arundel and Sybil Montacute married before he was made illegitimate in late 1344, because after the annulment he was no longer his father's heir and would not inherit the earldom of Arundel and his father's lands. The earl of Salisbury hardly seems likely to agree to one of his daughters marrying an illegitimate knight who would not inherit anything - though of course Salisbury was killed jousting in early 1344, and perhaps Sybil's marriage to Edmund was arranged after his death when he was no longer around to take care of her welfare. I haven't been able to find the date of Sybil Montacute's death, even though she was the sister of the earl of Salisbury and the countess of March and hence was pretty well-connected. Edmund Arundel was still active in February 1381, in his fifties, and appointed attorneys to act for him when he went to Gascony on a military expedition. He was dead by February 1382, when his two surviving daughters and his grandson from his other daughter were involved in a legal case (see here and here).

Whenever they married, Edmund and Sybil had three daughters, Katherine, Philippa, and Elizabeth Arundel. I assume that Katherine was named in honour of her maternal grandmother, Katherine Grandisson Montacute, countess of Salisbury; I assume Elizabeth was named in honour of her aunt, Lady Badlesmere and Despenser; and I assume Philippa was named either after her aunt the countess of March or after the queen, Philippa of Hainault. The three Arundel sisters were granddaughters of the earls of Salisbury and Arundel; their uncle was the long-lived earl of Salisbury who died in 1397 when he was close to seventy, and their other (half-)uncles included the earl of Arundel executed by Richard II in 1397 and the famous archbishop of Canterbury, Thomas Arundel. They were also first cousins of Edmund Mortimer, third earl of March (1352-81), and had numerous other important first cousins via their father's younger half-siblings. Although the three Arundel sisters married further down the social scale than their relatives because of their father's illegitimacy, one of Edmund and Sybil's granddaughters, Alice Sergeaux (1384-1452), became countess of Oxford by her second marriage and was the mother of John de Vere, earl of Oxford (1408-62).

It's difficult to ascertain the Arundel sisters' dates of birth or their birth order, but it seems that all three became mothers in the 1360s. Elizabeth married firstly Sir Leonard Carew, who was born in Stoke Fleming, Devon on 23 April 1342 and died on 9 October 1369, and their son and heir Thomas Carew was either one or two years old in April 1370, therefore was born sometime at the end of the 1360s not long before his father's death. She married secondly Sir John Meriet of Somerset, who was born on 24 March 1346. [2] The eldest of Philippa Arundel's five Sergeaux children was perhaps born c. 1367, and by 1370 at the latest. [3] Katherine Arundel's son Robert Deincourt or Deyncourt or Dancourt or Daynecourt, named after his father, was seemingly born around 1362/64; he was said to be either twenty-six or twenty-eight years old in early 1391. The rights to Robert's marriage passed to John of Gaunt, duke of Lancaster, who gave them to his mistress Katherine Swynford to use for her daughter Blanche Swynford at the start of 1375 (though for some reason Robert and Blanche never married). [4]

Given that Philippa and Elizabeth became mothers around 1367/69, and that Philippa's eldest grandchild was born in February 1393, they can hardly have been born later than the early 1350s, and if her son's date of birth of c. 1362/64 as stated in 1391 is correct, Katherine was surely the eldest Arundel daughter and must have been born in the mid or late 1340s. Philippa Arundel is the best known of the three daughters, and I'll discuss her and her children, and her two marriages, in the next post.
Elizabeth Arundel was widowed when Leonard Carew or Carru or Carreu or Carrewe (eldest son and heir of John Carew, d. 1362) died on 9 October 1369 at the age of only twenty-seven, leaving their infant son Thomas as his heir. Thomas Carew lived until 1431 and left a son and heir, Nicholas, and the line continued; the Carews became earls of Totnes in the seventeenth century. [5] Probably in 1373, Elizabeth married her second husband, Sir John Meriet of Somerset, born on 24 March 1346 as the son of John Meriet Senior and Eleanor Beauchamp, daughter of John Beauchamp of Hatch. John Meriet Junior died on 26 July 1391, and it was found that his heir was his daughter Elizabeth, who had turned four around 13 December 1390 and hence was born in December 1386, and despite her youth was already married to the oddly-named Urry Seymour. John had married secondly a woman named Maud, the widow of Ralph Seymour, who apparently was his daughter Elizabeth's mother, even though the little girl shared a name with her father's first wife. Elizabeth Arundel Carew Meriet was still alive in Michaelmas term 1385, and must have died before March 1386 when her widower John Meriet - with what seems like undue haste - conceived a daughter with his second wife Maud. [6]

As for Katherine Arundel, I'm confused about the family she married into, the Deincourts, and how members of the family were related to whom. Sir John Deincourt, uncle of Katherine's son Robert Deincourt, worked in John of Gaunt's household for many years, and his son and heir Roger Deincourt was born in May 1377 in Gaunt's castle of Kenilworth. [7] The records of Richard II's reign are full of stuff like the following, and my brain just waves a white flag and gives up. I'm not even sure whom Robert Deincourt ended up marrying after he failed to marry Blanche Swynford as planned, and when he died. 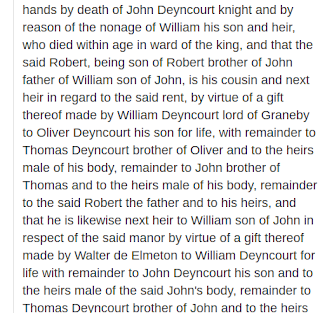 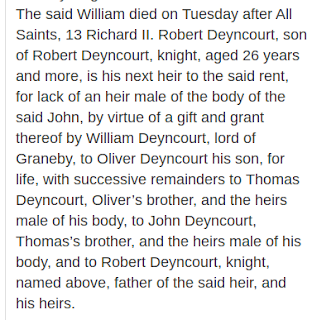 Katherine Arundel Deincourt was already dead by February 1382 when her son Robert Deincourt and her sisters Philippa and Elizabeth were involved in a legal case (see above for links). Philippa Arundel Sergeaux Cornwall was the last living of the three daughters of Edmund Arundel and Sybil Montacute, and died on 13 September 1399; I'll write about her in the next post.

I never stop to wonder how much details you can come up with. This is simply unbelievable. I would be lost for ever to these family labyrinths.

Which source states that Sir Edmund de Arundel was in Gascony on military matters in Feb. 1381?

Hi LT, the database at medievalsoldier.org says that Edmund received letters of attorney to go to Gascony on service on 11 February 1381, citing C 61/94, mem. 9.