John of Gaunt and the Lancastrian Inheritance

Recently it was the anniversary of John of Gaunt's birth on 6 March 1340. John, the fourth but third eldest surviving son* of Edward III and Philippa of Hainault, was born in the abbey of St Bavo in Ghent, in modern-day Belgium. Ghent was called 'Gaunt' in England in the fourteenth century and afterwards, and therefore John of Ghent has always been known as John of Gaunt.
* His older brothers were Edward of Woodstock (b. June 1330), William of Hatfield (b. and d. early 1337) and Lionel of Antwerp (b. November 1338). His older sisters were Isabella of Woodstock (b. June 1332) and Joan of Woodstock (b. c. January 1334).
Below, from the parliament rolls in 1383: la ville de Gaunt, 'the town of Ghent'. 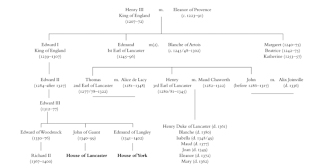 If, for whatever reason, Blanche of Lancaster had never had children, her surviving aunts and the children of her other aunts would have been co-heirs to the vast Lancastrian estate on her death, in line with the law that female heirs, or their children if they were dead, received equal portions of an inheritance. If John of Gaunt and Blanche had had no child who lived long enough to take a breath, John would have had no claim to any part of his wife's lands after her death. 'Old John of Gaunt, time-honoured Lancaster' would not have been Lancaster. And finally, assuming that John and Blanche did have their children but that Wilhelm von Wittelsbach and Maud of Lancaster's daughter lived for a while after her birth in 1356 and Wilhelm didn't become incapacitated in c. 1358, John would have had to share the Lancastrian estate with his German cousin and brother-in-law until Wilhelm's death in 1388.
Sources: Calendar of Inquisitions Post Mortem 1361-65, nos. 118, 299; Calendar of Close Rolls 1360-64, pp. 201-11.
Posted by Kathryn Warner at 10:56 am

Thanks for posting this ... and for explaining "courtesy of England" (at least I now know why Edmund Tudor didn't wait before impregnating his 13 year old wife) No wonder these people could give so much trouble to the monarchs

Thanks, Esther! I'm currently writing a book called Sex and Sexuality in Medieval England, in which I mention the 'courtesy of England' and how it unfortunately gave men who married an heiress an incentive to have a child with her as soon as possible, using the example of Margaret Beaufort and Edmund Tudor. Isabella de Verdon, who gave birth to her first child in 1331 before she was even 14, is another example, as is Joan Montacute, ultimately the sole heir of her mother and said to be pregnant in 1363 just days after her 14th birthday.