An Attack on Southampton, 30 September and 1 October 1321

According to a petition presented to Edward III sometime in the very early years of his reign by his "liege people of Southampton", Robert Batail of Winchelsea, baron of the Cinque Ports and formerly one of Edward II's admirals, launched an attack on Southampton in the company of "many other" men of the Cinque Ports in the autumn of 1321. This assault was allegedly abetted by Hugh Despenser the Younger, then a pirate in the English Channel after being exiled from England by his baronial enemies in August 1321, and the petition states that Despenser accused the people of Southampton of supporting Thomas, earl of Lancaster, in his ongoing quarrel against his cousin Edward II. The assault was said to have taken place on "the Wednesday and Thursday next after St Michael" (le merkerdy et le joeuedy p'scheins ap's le seint Michel) in the fifteenth year of Edward II's reign. Edward's fifteenth regnal year ran from 8 July 1321 to 7 July 1322, and the feast day of St Michael, also often called Michaelmas, is the 29th of September, which fell on a Tuesday in 1321. This dates Robert Batail's attack on Southampton to Wednesday 30 September and Thursday 1 October 1321. The Annales Paulini, i.e. the annals of St Paul's in London, confirm some of the details of the petition, and give the exact same date: in crastino Sancti Michaelis...et in crastino similiter, i.e. on the morrow of St Michael and then again on the morrow.

Below, part of the petition, which is written in the most gorgeously clear handwriting. 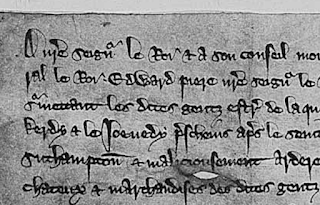 The petition of the people of Southampton states that Robert Batail and his men came to the port and burnt ships with goods, chattels and merchandise inside. Furthermore, they stole other goods, chattels and merchandise which they found, and stole ships as well, to a total value of £8,000. The text of the Annales Paulini confirms that the sailors of Winchelsea, "kindled by the fuel of envy," sailed into the port of Southampton in thirty ships and "maliciously burnt" fifteen ships at anchor there. The petition claims further that soon afterwards, Edward II sent the "community of Southampton" (la comunaute de Suthampton) to Portchester Castle and imprisoned them there, and made them swear not to bring any suit against the people of the Cinque Ports, promising to make good their losses, but failed to do so (des queux rien nest fait). The people of Southampton thus requested "aid and remedy" from the young Edward III, especially as the port was now "in the hand of my lady the queen," Isabella of France.

Robert Batail - his name also appears on record as Bataill or Bataille or Batayle - was appointed "captain and admiral of the ships of the Cinque Ports about to go against the Scots" a few months after the attack on 13 May 1322, and on 18 April 1323 was appointed admiral of the western fleet. On 6 May 1322, Robert and his associate Robert Alard, also of Winchelsea, were pardoned for "all offences committed on land or sea". So it hardly seems that Edward II was angry with him for the destruction and theft he and his associates carried out in Southampton.

Given that Edward II placed Hugh Despenser under the protection of the men of the Cinque Ports during his supposedly perpetual exile from England in August 1321, and given that the king himself arrived at Portchester on 4 or 5 October 1321 just days after the attack on Southampton, the story that he imprisoned some of the victims of Batail's raid at Portchester Castle seems pretty plausible. It's also plausible that Hugh Despenser the Younger, committing piracy in the Channel in the company of some of the men of the Cinque Ports at the time, had something to do with the attack. On the other hand, a lot of the petitions sent to Edward III and/or his mother Queen Isabella near the start of his reign blamed Despenser and his father for everything bad that had happened to the petitioner, and a lot of them claimed loyalty and adherence to Thomas of Lancaster, who was being rehabilitated at the start of the new reign a few years after his execution. I wouldn't be at all surprised if the story was true, though the Annales Paulini don't mention Despenser's involvement, and it's not impossible that including him was a deliberate ploy by the petitioners to elicit a favourable response from the young king and/or his mother.

Posted by Kathryn Warner at 2:45 pm