This is a continuation of my post yesterday, which is directly below this one, or can be found here. I've just noticed that E 101/379/5, a bundle of documents I looked at in the National Archives recently, also relates to Huchon's hunting trip of 1322. Firstly, there's the Latin original of the letter I cited in the post, sent by Edward II to twenty-three sheriffs on 21 July 1322, telling them that Huchon would be travelling through their areas, hunting. Secondly, there's a bundle of letters and memoranda from some of the sheriffs informing the king of the numbers of deer Huchon and his crew had successfully hunted, which they had been ordered to salt and store in barrels until further orders. There's also a letter from Thomas Rous, sheriff of Warwickshire and Leicestershire, stating that while Huchon and his companions were staying in his jurisdiction he had paid out £11 and 4 shillings for their expenses and wages, and one from 'Amory la Souche' (or Aymer la Zouche), sheriff of Huntingdonshire and Cambridgeshire, who paid £14, 17s and 8d during their stay in his counties. The sheriff of Suffolk - and also of Norfolk, though Huchon didn't go there - was Sir John Howard ('Johan Houward'), who paid out £13 5s for Huchon's expenses, and who interests me because a) he was married to Edward II's second cousin Joan Cornwall, and b) he was an ancestor of the Howard dukes of Norfolk. The sheriff of London and Middlesex, or rather, one of them - there were always two sheriffs of London - was Richard Costantyn, though his letter is missing the total sum of expenses. There are other letters and memoranda from sheriffs of other counties too, and the letter from the sheriff of Essex, Sir Nicholas Engayne, says that he and Huchon had met at Waltham Abbey.

Below, the letters, indentures and memoranda. 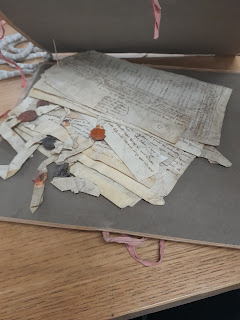 Then there are several memoranda which give the number of deymes or deer Huchon and his crew killed, and where:

- In the park of Kenilworth in Warwickshire, thirty.
- In the forest of Leicester, in the jurisdiction of Robert Squyer, ten.
- In the parks of Essex, Hertfordshire and Suffolk, whose keeper was William Marny, a total of sixty-seven.
Presumably, there must have been more meat than that, but that's all that exists now. And finally, there's also a letter written by Huchon himself - well, written by a clerk in his name, one assumes - which begins "To all those who see or hear these present letters, Hugh the son of Sir Hugh Despenser the younger [Hugh le fuiz mons' Hugh le Despenser le puisnez], greetings in God."
Below, Huchon's letter. 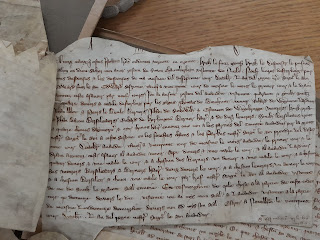 Huchon states in the letter that he had received £9 from Simon Chamberleyn, sheriff of Lincolnshire, "for my expenses and the expenses of my retinue" from 17 to 25 October 1322, which is exactly the same date range given by Edward II in a letter of 10 November 1322 (see last post) for Huchon's sojourn in the county. It gives the same names of his nine companions as the king's letter of 21 July on the Close Roll, just with the usual variations in spelling, and repeats the same wages as the royal letter, e.g. 7½d per day for the huntsman, 4½d for the berners, and so on. The letter also makes clear that Huchon, despite his youth, already had his own seal, and he dated the letter from Nettleham, a village in Lincolnshire which was a manor of the bishops of Lincoln, on 25 October (his father Hugh the Younger and great-uncle Edward II were seventy miles away in York at the time).
Also included in this bundle of documents is one relating to Huchon Despenser's magister Hugh de Lulleford or Lullesford, about whom I know nothing and had never even heard of before, though he was married with a daughter, and also had a nephew called Richard Popleham. Edward II bought five and a half ells of green cloth for Lulleford's unnamed daughter and blue cloth for Richard, six ells of striped cloth for him on another occasion, a jerkin (corset) for 3s 10d, and several pairs of shoes.
Posted by Kathryn Warner at 1:40 pm

I would like to have been at the meeting of the sheriff of Essex with Huchon. I wonder, was it formal or more of a chat about hunting practices. After all, what are you going to talk about with a 13-year-old lad? I am also surprised (but, there again, am I?) that he already had his own seal. He certainly seems to have had a lot more at his age than his father did (I can't remember, did he have any land at that point?)

I'm pretty sure they just chatted about Huchon's hunting trip, heh! And as far as I remember, Huchon didn't have any land until the early 1330s, after he was finally released from captivity and knighted, when Edward III gave him some. I was just thinking how in and after 1322, Huchon must have come to think of himself as future earl of Winchester, as his grandfather's heir after his father, and I wonder how he felt when all of that was snatched away from him.

I would imagine that, from a position of a certain powerful and wealthy future to falling to nothing (and nearly death as well) that he learned a lot. I would like to think that he learned an amount of humility - something he could not have got from his father.