The Abduction of John Chaucer, 1324

One thing we do know is that Mary and Richard Chaucer asked for damages of £300 and were awarded £250, a massive sum in an age when £5 was a normal yearly income. Geoffrey Stace sent a petition to the king in the late 1320s or 1330, complaining that the lands of John Chaucer's inheritance were only worth £1 per year and that therefore £250 was an ureasonably excessive amount. Incidentally, the Second Statute of Westminster in 1285 set the punishment for abducting a child (whether male or female) whose marriage belonged to someone else at two years' imprisonment, as long as the person restored the child still unmarried, or paid what the marriage was worth. Otherwise, the punishment was either life imprisonment or abjuration of the realm, i.e. permanent exile from England. [6] It was taken very seriously. John's stepfather and guardian Richard Chaucer, and John's older half-brother Thomas Heyron, apparently exacted revenge on Geoffrey Stace and Agnes after the abduction. They travelled from London to Ipswich, a distance of about 70 miles, and stole goods worth £40 from Agnes Westhale/Stace's house, or so the indignant Agnes claimed in 1325. [7] John Chaucer was around twelve or fifteen in 1324/25, and his Heyron half-brother, given that his father died sometime around 1303/04, must have been in his early twenties or older. There is much evidence that the two half-brothers were very close and often acted together.
On 16 December 1330, eighteen-year-old Edward III - who had recently taken control of his own kingdom from his mother Isabella of France and Roger Mortimer - sent a letter to Sir Geoffrey Scrope, one of the chief justices of the King's Bench and ancestor of the Scropes of Masham (Henry, Lord Scrope of Masham, executed by Henry V in 1415 after the Southampton Plot and mentioned by Shakespeare in his play about Henry, was Sir Geoffrey Scrope's great-grandson). The letter, stating that John Chaucer was now 'of full age', is printed in the Calendar of Close Rolls 1330-33, pp. 90-91, and was almost certainly a response to Geoffrey Stace's petition. Geoffrey Stace had been detained in the Marshalsea prison in London because of his 'trespass against the king's peace', as well as being held liable for the massive sum of £250, and Edward ordered his release. The Letter-Books of London (vol. E, pp. 218-19, 226, 237, 239-40) show that several inquisitions were held in the city in 1328, one of which was to determine whether Geoffrey Stace, his relative Thomas Stace and his servant Lawrence had committed perjury, and the whole thing dragged on for several years, as often happened in medieval court cases (and the delay in this one was worsened by the dramatic events of 1326/27 when Edward II was forced to abdicate in favour of his son). The 16th of December 1330 was six years and thirteen days after John Chaucer's abduction had taken place.

A few years after his abduction by his aunt and uncle, John Chaucer married Agnes Copton, and they became the parents of Geoffrey Chaucer. I wonder if it's a coincidence that Geoffrey bore the same name as his father's uncle Geoffrey Stace, or if the latter was his great-nephew's godfather and John Chaucer was doing his best to bury the hatchet. Geoffrey Stace was still alive in February 1344, and Geoffrey Chaucer had probably been born by then. [8]
Below, part of a petition sent by Geoffrey Stace, to which Edward III responded in December 1330, and in the second pic, part of the petition printed in Rotuli Parliamentorum. 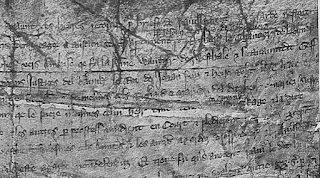 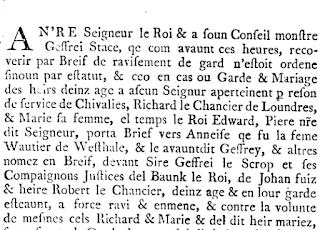