Photos of the Marches (1)

I'm back from a really great holiday! The Marches (Shropshire/Herefordshire) are a wonderful part of England, and I recommend the area very highly, if you ever get a chance to go there. It's very rural, with lots of quaint little villages, more buildings of historical interest than you could possibly imagine, and gorgeous countryside. Everywhere you go, you get long, wide views of lush, green, rolling countryside.

I have loads of photos of the following places, which I'll be posting here over the next few days:
- Ludlow Castle and town, Shropshire
- Wigmore Castle, Herefordshire
- Stokesay Castle, Shropshire
- Clun Castle and village, Shropshire
- Lower Brockhampton, Herefordshire (late 14th century moated manor house) and estate
- Hereford
- Leominster, Herefordshire
- Pembridge, Weobley, Leintwardine, Orleton - villages in Herefordshire
- Church Stretton, Shropshire and surrounding countryside (The Long Mynd and Wenlock Edge)
I have about 750 photos, far more than I can post here, so if anyone's interested in seeing more, feel free to contact me at: mail at edwardthesecond dot com (with appropriate symbols and without spaces, of course), and I'll send them off to you.
Since the terrible floods in July, it's actually been pretty dry in England, as you can see from a dried-up stream bed in Church Stretton, the low level of the River Wye in Hereford, and a small lake close to Stokesay Castle: 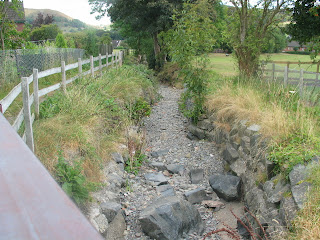 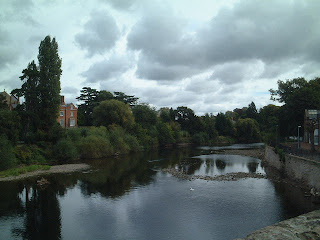 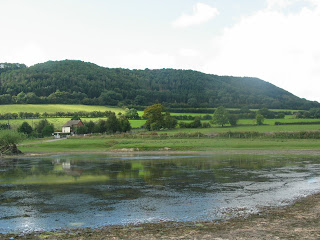 But the countryside is still as green as you'd expect: 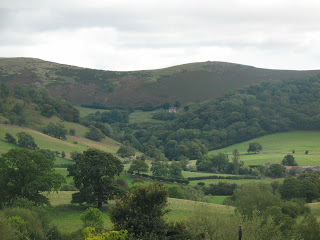 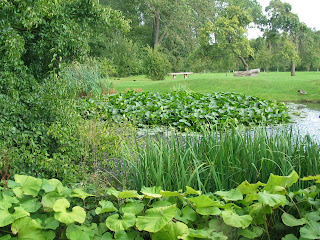 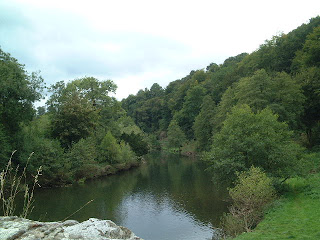 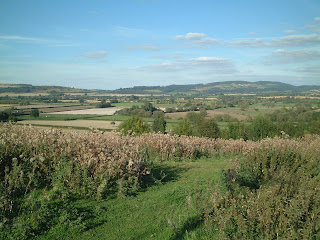 [Top to bottom: countryside near Church Stretton; the moat at Lower Brockhampton; the River Teme at Ludlow; view of the Herefordshire countryside from Wigmore Castle]
We stayed in northern Herefordshire, about halfway between Ludlow and Leominster (pronounced 'Lemster'), in a converted 19th century cider mill. The owners have kept the original features downstairs: 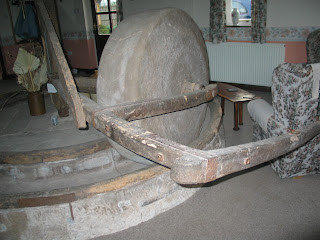 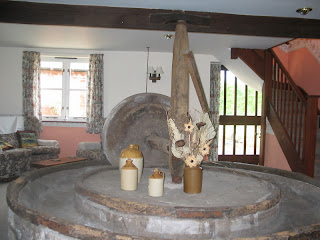 This is where the apples were crushed - the wheel was drawn by a horse.
This is my absolute favourite photo, taken inside Ludlow Castle: 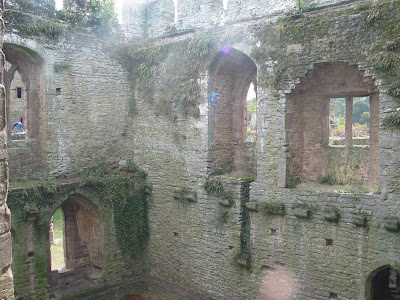 I love the way the sun is coming through the windows - and check out the blue and purple splodges in the middle of the photo. (Also, if you look through the window on the left, you can see a workman bending over with his backside sticking up in the air. I didn't notice that when I took the photo...honest! ;) 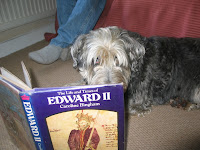 This is my mum's dog Tara, learning all about Edward II (with my other half's feet in the background, haha) 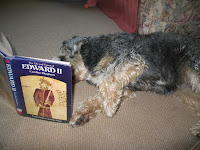 But sadly, she soon lost interest!

Driving between Leintwardine and Clun, we passed over into Wales for a few miles. 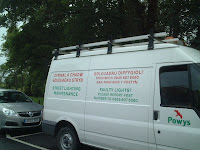 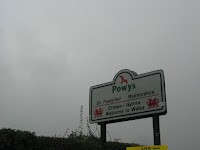 In Wales, almost everything is written in Welsh and English, as on this van:

[Click on the photos to get a larger version.]


But this is my favourite sign, from Clun. "Dog owners beware, young ducks in the area"! :-) 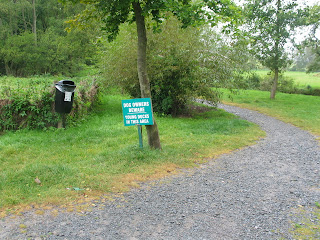 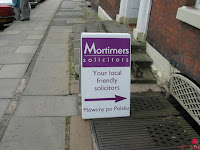 And finally, this sign in Ludlow ("We speak Polish") caters to the vast numbers of Polish people working in the UK these days.

Great name for a bunch of lawyers, too.

Maybe Tara didn't lose interest--just had to take a rest to get ready to absorb some more Edward II info?

I so want to go back to England right now.

Susan: thanks! Unfortunately, I tried to persuade Tara to read the book again a few days later, but she just sniffed and stalked away...;)

Gabriele: it's a lovely area, if you ever have the chance to go there - though I don't think there are many Roman buildings (might be wrong, though).

You sound like you had a terrific time! I am wild with envy. Loved the look of Ludlow. I am trying to picture the wooden floors and the windows draped with something beautiful that would have been there. Such amazing stone arches. Oh no, now I will have to google it instead of washing. Dang. :))

Welcome back! Lovely photos.
The Roman site at Wroxeter (Viroconium) isn't too far away, depending which bit of the Marches you visit.

Kate: yes, I had a really great time! I'm going to post some more pics of Ludlow Castle very soon, so I think your washing will have to wait a while. ;)

Carla: thanks! Of course, I'd forgotten about Wroxeter. The village of Leintwardine, which we passed through, has some Roman remains too (didn't see them, though). They called it Bravonium, and it stood on Watling Street.

I knew there had to be Romans around. They've been everywhere. :)

WOW! You're so lucky to have visited all these places! A trip to Roger's lands, my Gosh! I'd love to see all the pics you've taken!!!

Gabriele: yup, they do crop up in the most unexpected places. ;)

Elflady: I know, I'm so lucky, aren't I?? I have loads of pics of Wigmore and Ludlow castles that I'll be posting here soon, and loads more (close to a couple of hundred, probably) that I don't have space for here - but if you'd like to see more, just let me know!

Of course I would!!!

OK! If you'd like me to send you some, just write to me at: mail at edwardthesecond dot com, with the @ symbol and without spaces, naturally! ;), so I have your email address (which I'll keep private, obviously)

Great photos Alianore.
We love Ludlow and its environs. If we ever moved house it would be to that area. Your photos brought back memories of my several research trips to the region a couple of years back.

Hi, Elizabeth - thanks for dropping by! Glad to hear you enjoyed the photos, and that they brought back happy memories for you. I'd love to live in the area, too - it's so beautiful. I'll be posting quite a few more pics of Ludlow Castle soon - I suppose you know it very well, from your research trips there. Great place!