Photos of the Marches (3) 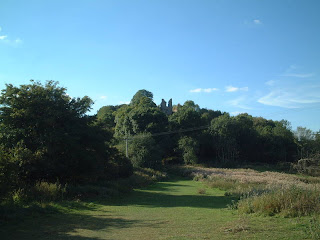 Wigmore is is north Herefordshire, 12 miles from Ludlow and 20 miles from Hereford. The castle was originally built shortly after the Norman Conquest of 1066, and rebuilt in the mid twelfth century by Hugh Mortimer. Shortly afterwards, in 1155, it was besieged by Henry II. The Mortimer family had owned the castle since 1075.

In July 1304, Roger Mortimer's father Edmund died. As Roger was only seventeen and wouldn't legally come of age until he was twenty-one - which seems pretty ridiculous, considering he'd been married for almost three years in July 1304 and had at least one child - Edward I granted his wardship to Piers Gaveston, at the request of the twenty-year-old Prince of Wales, the future Edward II. This was a huge, huge favour, as Piers thereby gained an income estimated at £700 a year - a vast income for a young man not yet a knight. Most unusually, however, Roger bought Piers out of the wardship, and was granted seisin of his lands on 9 April 1306, when he wasn't quite nineteen. He thus inherited vast estates scattered over many English counties and in Wales, and became Lord of Wigmore, which was his seat and power base.

After Roger was arrested by Edward II in January 1322, all his and his wife Joan's possessions were forfeit to the Crown. Edward sent a group of men to Wigmore to seize Roger and Joan's goods, and the inventory is, fortuitously, still extant, in the Public Record Office. (It was published in the Archaelogical Journal in 1858, and much of it appears in Ian Mortimer's biography of Roger, The Greatest Traitor, if anyone would like to see it). 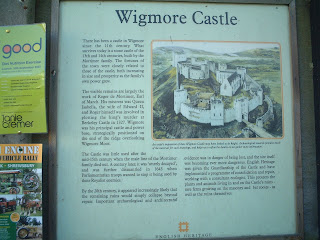 This picture shows Wigmore Castle as Roger would have known it. Sadly, it's in an extremely ruinous state these days - but still evocative and atmospheric, with stunning views, and well worth a visit. 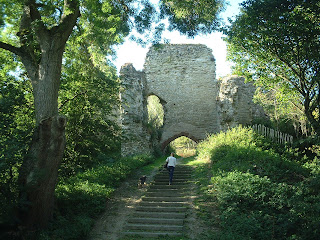 This is the gatehouse, which was originally two storeys high. Because of fallen masonry and vegetation, the remains of Wigmore Castle are buried up to first floor level. There's an interesting site here, describing the problems of maintaining Wigmore. 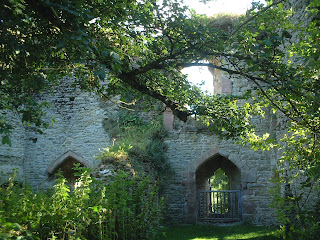 You walk around a steep hill, through the wood, and ancient masonry looms out of the trees, like here... 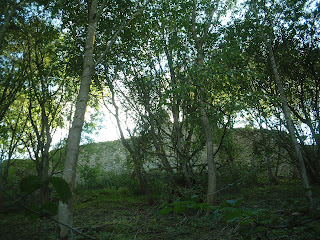 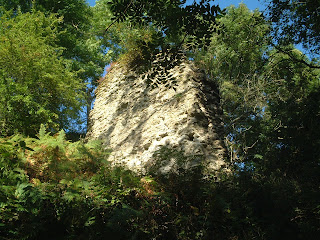 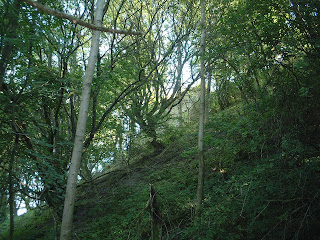 In the late summer of 1329, Roger held a great Round Table jousting tournament at Wigmore, which also marked the celebration of the wedding of two of his daughters, Agnes and Beatrice, who married Laurence Hastings, the future Earl of Pembroke, and Edward, son of Edward II's half-brother Thomas, Earl of Norfolk, respectively. (The birthdates of Agnes and Beatrice are not known, but Laurence Hastings was born in 1320 and Edward of Norfolk in about 1322/24, so we're talking about the marriage of children here.)

The tournament was presumably held in the valley below the castle, and was attended by sixteen-year-old Edward III (who paid Roger, reluctantly, one imagines, the vast sum of £1000 for his daughters' weddings) and Queen Philippa, Roger's mistress Queen Isabella, probably his wife Joan, and a vast crowd of the English nobility. Roger was 'crowned' as King Arthur, while Isabella played Guinevere and oversaw proceedings. 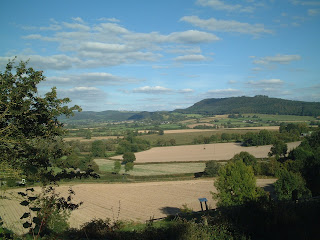 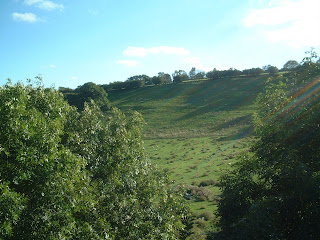 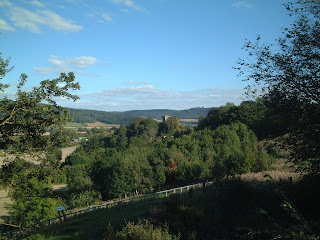 St James church, Wigmore, peeking out of the trees, as seen from the castle. It originally dates from before the Norman Conquest.

The church tower dates from the mid-fourteenth century, a decade or two after Roger's execution in 1330, unfortunately - I loved the idea that I could see the same tower that he did, from the same perspective. 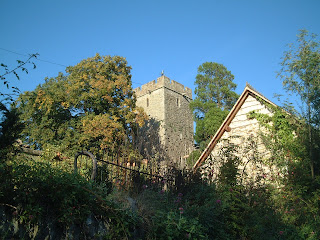 Close-up of the church tower. Just look at that perfect blue sky! 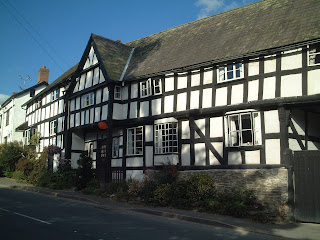 Wigmore post office. Buying stamps would actually be a pleasure.

Although there would probably have been far more trees in the fourteenth century, and rather fewer electricity pylons, this is the view over the valley and hills that Roger would have seen: 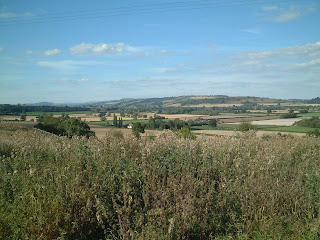 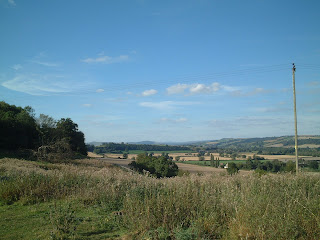 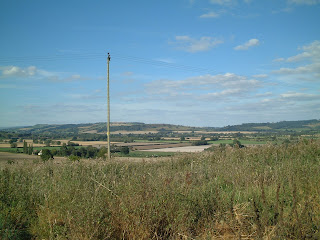 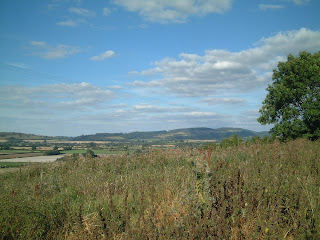 This area of North Herefordshire is marketed as Mortimer Country these days - here's the website. There's a 30-mile walk called the Mortimer Trail - one day, I'm going to do it...
Posted by Kathryn Warner at 8:12 pm

I'll happily do the walk with you! Great photos, although it is hard to imagine it in its prime. It still looks like an imposing place. Thanks!

Hehe, my local post office looks like they made it out of revolting grey concrete in about a week, then just abandoned it!

Kate: it'd be great to do the walk with you! The castle was already dilipidated by the 16 century, unfortunately - I just think, ah well, at least there's something left...;)

I'd definitely like to get to Wigmore Castle! Looks great.

It's very atmospheric, Alison. Hope you get to go there sometime!

What beautiful ruins. Somehow, half tumbled and overgrown castles are more atmospheric than reconstructed ones.

Yeah, I agree. I found Wigmore very...affecting, with the wood and the ruins looming out of it.

There's something tremendously evocative about the ruins looming out of the trees. If ever there was a place where you might open a secret door and go back in time, it would look like that :-)

30 miles would make a reasonable weekend or long-weekend hike, if there's accommodation at the right places.

*Has visions of travelling back in time and meeting Roger* :-) Sigh...if only I could open a secret door to the early 14th century...! :)

The Trail seems to be pretty well-organised, so I imagine there's accommodation set up along it. It really would make a lovely weekend hike.

I saw Wigmore Castle years ago before it was open to the public. You couldn't get too close then as it was too dangerous. We walked up the hill from the village past a farm where there must have been at least 30 ginger cats. Your photos are fantastic.

Thank you, Liz! That's interesting about not being able to get close to Wigmore a few years ago. I'm glad they've done so much work on it, so we can visit it - I thought it was one of the most wonderfully atmospheric places I've ever seen.

Unfortunately, the cats don't seem to live there any more. ;) (Or maybe the descendants of the cats you saw were hiding from me and the dog. ;)

I think English Heritage had just acquired the castle & were waiting for funding to restore it.