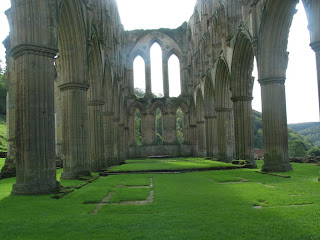 Rievaulx ('ree-voh') was founded in 1132 as the second Cistercian abbey in England (after Waverley in Surrey, founded four years previously), when Walter l'Espec granted the Cistercians about 1000 acres of land in a valley a couple of miles from his castle at Helmsley - which is about 35 miles north of York and 30 miles west of Scarborough. 406 years after its foundation, on 3 December 1538, Abbot Roland Blyton and 21 monks signed the document of surrender, and handed the abbey over to Henry VIII's commissioners. Henry granted it to the earl of Rutland, who promptly set about pulling down parts of the abbey - and has, I can only hope, been languishing ever since in the part of hell reserved for people who wilfully destroy magnificent old buildings. Still, looking on the bright side, the damage could have been infinitely worse.

Rievaulx is just the most amazing place. I could have wandered around all day, soaking up the atmosphere, marvelling over it. At its height, it must have been utterly magnificent, mind-blowingly rich and splendid.

Click on the pics if you want to enlarge them.

The picture at the top is the presbytery looking towards the high altar (the large stone slab at the end) and here, how it looked in the Middle Ages, and looking upwards and sideways. 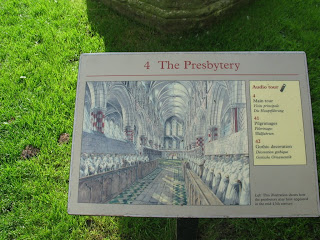 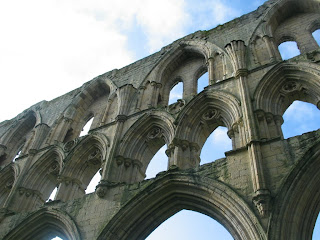 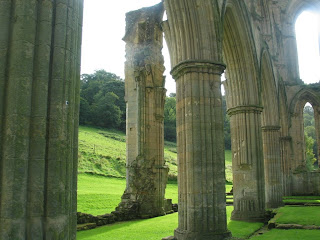 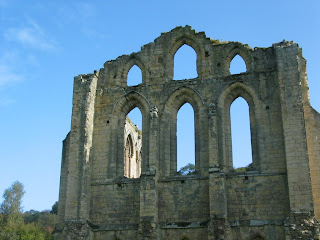 The outside of the refectory. 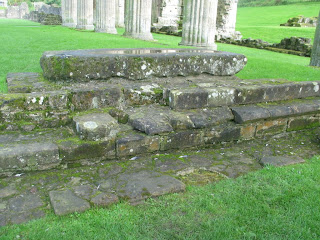 The high altar, with the now sadly non-existent shrine of St Ailred just behind it (nearest the camera). Ailred became the third abbot of Rievaulx in 1147 and died twenty years later. The shrine, made of gold and silver, must have been superb. 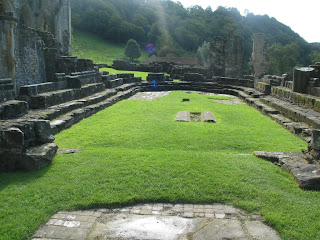 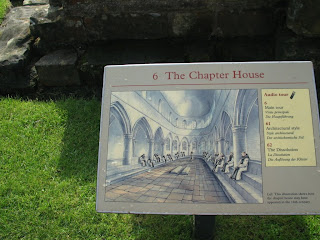 The chapter house. This is where the monks met every day, when a chapter of the Rule of St Benedict was read out (hence the name of the room), monastic business was conducted and discipline enforced. Important guests were welcomed here, so it's highly likely that Edward II was in this room on his visit to Rievaulx in 1322. The stones in the middle are graves of early abbots. It was in this room that Abbot Blyton and the remaining monks signed the deed of surrender in 1538. 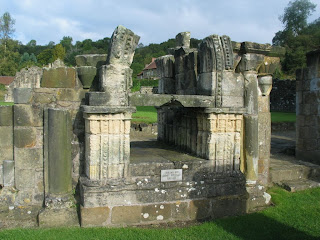 Just outside the entry into the chapter house, this is the shrine of St William, first abbot of Rievaulx, who died in 1145; the shrine was constructed about a century later. William's remains were placed on the higher level, and the lower level was designed for pilgrims to crawl into, to get closer to the relics and thus benefit more from their miraculous properties. It would, of course, have once been highly decorated and lavish. 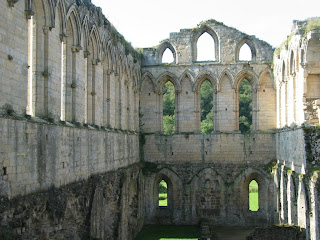 The refectory (upper level, where the lighter stone begins; the ground floor was an undercroft). From fragments of paint which remain, we know that the walls were pale pink.

Some pics of the abbot's lodgings, built for Ailred in the 1160s. Edward II probably stayed here in 1322. 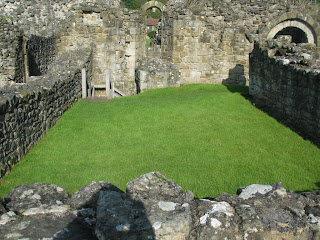 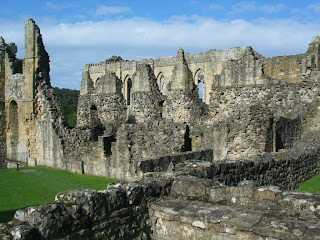 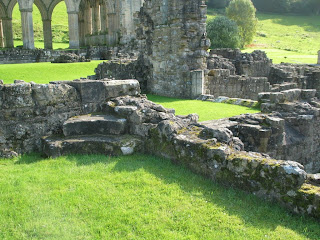 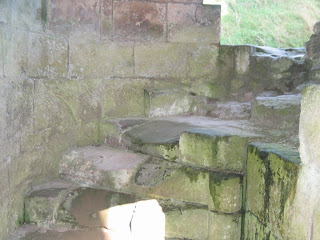 Steps that no longer lead anywhere, and looking upwards. 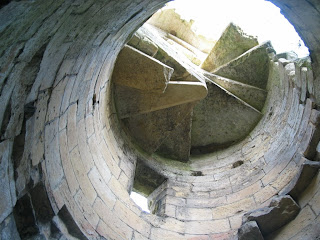 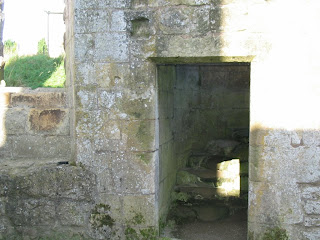 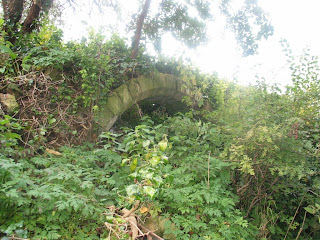 What remains of the inner gatehouse. 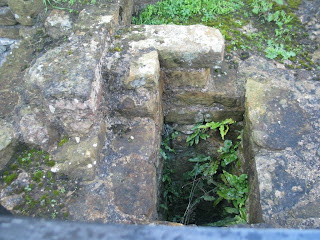 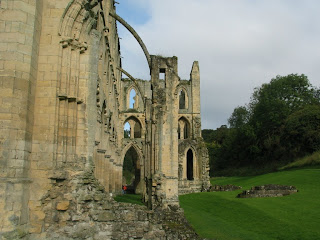 Flying buttresses outside the presbytery. The ground to the right was the monks' graveyard.

Beautiful pics and you got nice weather too. What more could you need?

I SO want to go there.

Great pics! Glad you got one of one of the latrines - for some reason I have a thing about them lol!

Pale pink walls - how soothing! They must have had a top notch interior designer!

On a more serious note though - these ruined once magnificent buildings always make me feel simultaneously sad and angry. Sad that such splendour has been lost and angry at the gits who did it! I had a smiliar experience when I revisited Tintern Abbey the other day.

Wow, such beauty!! I can almost understand why people chose a monastic life - to live within such glorious surroundings. What is the book that has the illustrations of how it looked in the 15th century? I'd like to see more of it.

Paul: exactly! I was so lucky with the weather that day.

Gabriele: I really hope you get to see more of Yorkshire sometime soon - it's fantastic.

Lady D: LOL, I feel the same about latrines - I took loads of pics of the ones at Ludlow Castle last year. ;) I also get very angry about the destruction of old buildings. When I visited Tewkesbury Abbey, I felt simultaneously overjoyed that it's survived, and sad at the thought of how many similarly magnificent buildings have been lost.

Hi Linda, and thanks for dropping by! I took the pics with the illustrations of how the abbey once looked from information boards dotted around the abbey ruins - English Heritage puts these up at (I think) all their sites, which is really helpful. They also appear in the official guidebook to the abbey - if you're interested, maybe you can buy it online. Here's the website: http://www.english-heritage.org.uk/server/show/nav.2

Photos are just wonderful. I wish I could have come with you.

I love that you took photos of the illustrations, it really helps to see what it looked like, because it is very hard to imagine from the ruins the true beauty of what once stood there.

In fact, now that you come to mention it, perhaps I did hear your scream of frustration...I thought it was the wind.....

I wish you could have come too, Kate! I went back to Rievaulx after I accidentally deleted my photos of it - it was worth paying the entry fee twice, and I just had to have pics of it! The illustrations are really helpful, as otherwise it's very hard to imagine just how colourful these places used to be.

Haunting photos, Alianore, it must have been an almost transcendent experience to walk among those ruins.

Like Lady D., I find myself feeling repulsed at the destructive nature of religious extremism that would wipe out both historic architecture as well as the lives of countless innocents. Religious fundamentalism seems a genetic fault of our species.

There is one individual more responsible than all the others for the destruction of the monasteries ("the git who did it," in the words of Lady D), and that person was Richard Rich, Baron Rich of Leez (d. 1567), counsel to the King and soon after that monarch's death appointed Lord Chancellor of England:

I only know all this because Chancellor Rich is my 12th great-grandfather. In 2006, BBC voted him the most despicable Briton of the 16th century! Oh well. We can't pick our ancestors...

Hi Kevin! Yes, it was a very moving experience. I felt quite humbled.

*Sends deadly glares in the direction of Richard Rich*. I didn't know (or I'd forgotten) he was voted worst Briton of the 16th century, but I can't say I'm surprised! And he's your 12 greats grandpa...very interesting...;)