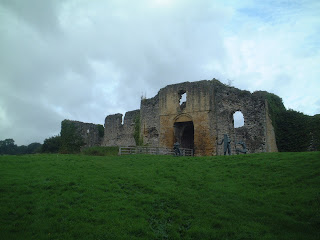 Helmsley was built around 1120 by Walter l’Espec (‘Walter the Woodpecker’), who gave the Cistercians land on which to build Rievaulx Abbey and founded the Augustinian priory of Kirkham in Yorkshire and Warden Abbey, also Cistercian, in Bedfordshire. He also built Wark Castle in Northumberland. In Edward II’s reign, Helmsley belonged to William Roos (or Ros), who died in 1316 and was the uncle by marriage of Maud Nerford, mistress of the earl of Surrey. In the early 1290s, he had been a competitor to the throne of Scotland.

To my almost certain knowledge, Edward II never visited the castle, but his son Edward III was here in 1334.

These photos were taken on a dismal Sunday morning! Click on them to see a larger version. 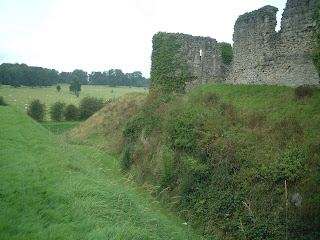 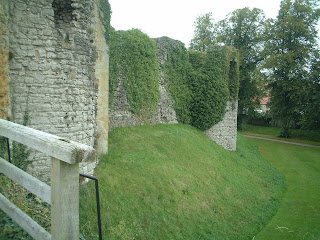 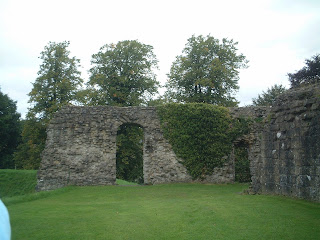 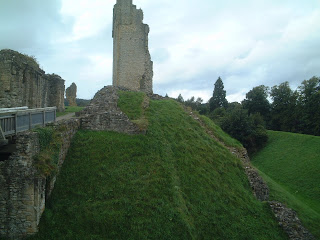 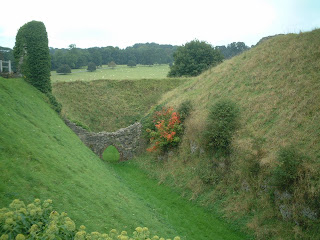 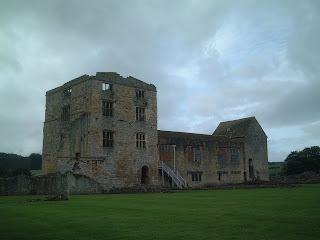 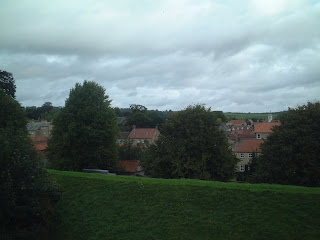 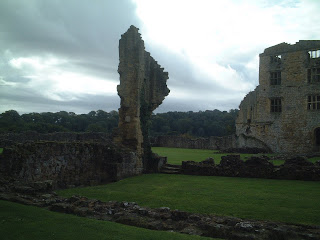 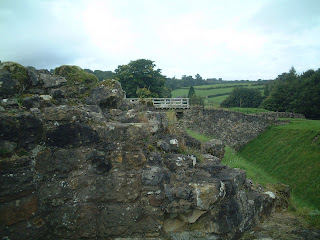 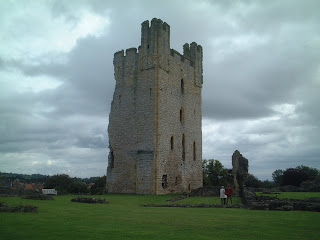 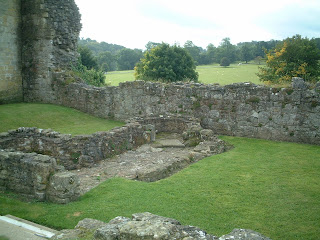 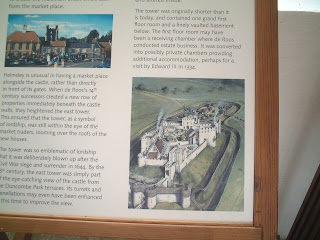 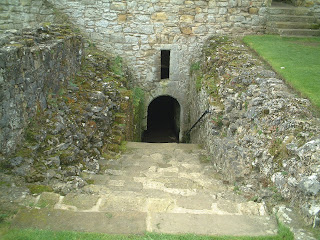 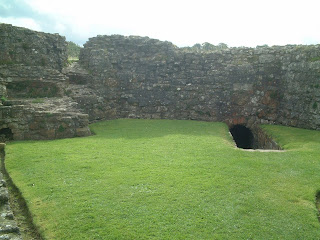 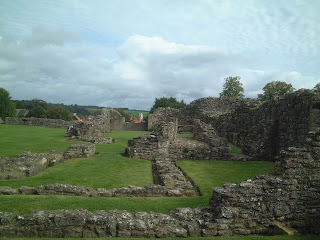 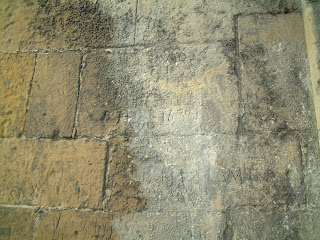 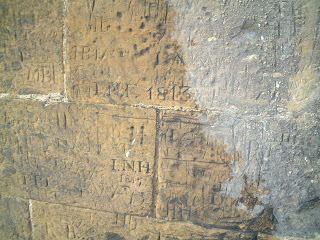 Knaresborough Castle
Brilliantly, I managed to delete almost all my pics of Knaresborough, which is a real shame, as most of what survives today was built by Edward II. Between 1307 and 1312, he spent £2174 rebuilding and restoring the castle, which he granted to Piers Gaveston in August 1307. Piers entertained the king here from 9 to 11 September 1307, and in early January 1312, the two men met here after Piers’ illegal return from his third exile. They then rode the seventeen miles to York, where Piers’ wife Margaret de Clare had just given birth to (or was just about to give birth to) his daughter Joan. After Piers’ death in June 1312, Edward II rarely visited Knaresborough, though he spent a few days here in January 1320 and February/March 1323.
In the twelfth century, the castle belonged to Hugh de Morville, one of the four murderers of Archbishop Thomas Becket. After the murder, on 29 December 1170, Morville and the three other killers sought refuge at the castle, the subject of a 1999 play called Four Nights in Knaresborough.
After Edward II’s deposition, the castle passed to his daughter-in-law Philippa of Hainault, then to her son John of Gaunt, then to his son Henry IV. In 1399, Richard II spent a night at Knaresborough on his way to imprisonment (and death) at Pontefract Castle.
Not too much is left of Knaresborough, and the castle remains are now a public park. When we visited, on a warm Saturday afternoon, lots of people were walking their dogs there, and wandering around or sitting on benches soaking up the sunshine, which I thought was great. I also had the pleasure of meeting Carole from Age of Treason. 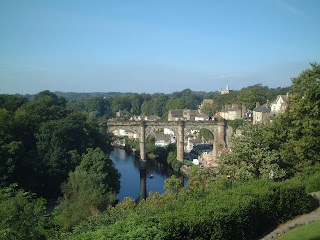 The only pic I have: the town and River Nidd from the castle.

Yep! There's an article about the (nick)name Espec here: http://www.4crests.com/spickett-coat-of-arms.html

Thanks, but now I'm stuck all day with the mental image of Walter banging his nose against a tree. Too many Woody Woodpecker cartoons when I was little.

I wonder why a woodpecker? Perhaps all the manly creatures, like lions, leopards, eagles and griffins, were already taken.

Didn't know about the connection between Knaresborough Castle and the murderers of Beckett - thanks for the info. Such a shame about the pix! And that there isn't more left of Piers' castle.

Walter the Woodpecker lol! Somehow it sounded better in the French (although not by much). Was he related to Sammy the Squirrel by any chance?

And, on a more serious note - was William Roos related in any close way to John de Ros who ran into Hugh's fist in 1316?

Thanks, Alianore, for taking and providing the photos! Gorgeous.

LOL, I can't stop imagining Walter the Woodpecker as a cartoon now...;)

Lady D: I had a horrible feeling you might ask me that, and I'm afraid I don't know. ;) As far as I'm aware, they weren't closely related, but were presumably cousins somewhere down the line - different branches of the Ros family.

Anerje: part of Knaresborough Castle - a pretty big section of wall - collapsed as recently as 1940, which is really irritating. Why weren't they looking after it better?!

Good point. :-) To have collapsed in 1940, though, the wall must have been in a serious state of disrepair for some considerable time, and even given the political tensions of the 1930s, I still think the owners should/could have looked after the castle a bit better. ;)

1940?! It should certainly have been cared for better previously! What a shame! And of course, in 1940, repairing it was at the bottom of the list, understandably.